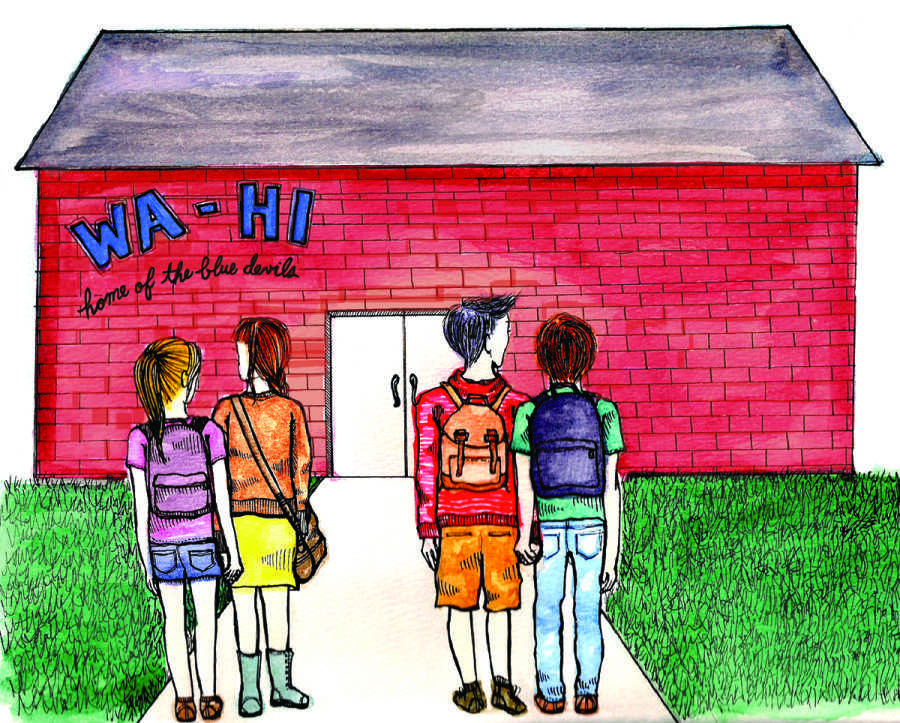 Walla Walla High School has over 25 active student-organized clubs, but until last year there was no Gay-Straight Alliance.

Senior Gabe Gonzales and juniors Tegan Coleman and Rosa Tobin knew that their school lacked a unified safe space for GLBTQ-identified students. Last September, the three students came together to create the resource they felt their school community was missing.

GSAs are found at many high schools across the United States, with the official title coming from the Gay-Straight Alliance Network, which works to establish these clubs in high schools. These groups serve as a support network and unified voice for both members that identify as GLBTQ and those who are straight. Students spearhead the process, working to create the clubs, serve in leadership and plan events.

“We all had our own personal reasons, but overall we realized the school needed this,” co-founder Tobin said at their Oct. 1 meeting. “We knew there were people that could utilize it, especially because we are a conservative town. When you enter the door, we’re not going to ask you, â€˜are you gay, are you straight?'”

Though they knew resistance could potentially be found, the administration was supportive of the club. Student body officers and the administration must approve clubs at Wa-High, and these two groups, according to moderator Casey Monahan, easily accepted the proposal of a GSA. However, some members of the faculty had questions about the legitimacy or the necessity of having the club on campus.

“Our principal has always been supportive, but staff did approach him with questions,” said Monahan. “In a community like Walla Walla, there are going to be questions, but I haven’t encountered any outspoken opposition.”

Students have encountered resistance on a more personal level, including instances of bullying.

“We talked as a group on how to deal with that,” said Tobin.

At their Oct. 1 meeting, students made posters to advertise upcoming meetings and events. Last year, they encountered silent resistance from students at Wa-High when many of their posters mysteriously appeared ripped or torn away.

“We were prepared to see posters ripped down, but it was still hard,” said Coleman, co-president with Tobin. This year, they are ready to fight back and have instituted a policy of ‘Poster-ception,’ according to member Malcom Gabbard. Posters will now go up in multiple stacks, so if a student decides to rip one down, he or she will be met by another waiting under it.

Though these challenges occurred last year, the club has strong student support.

“We probably had 50 people at our first meeting last year,” said Coleman.

The GSA hopes to become more involved with Whitman’s groups pertaining to issues within the GLBTQ community, including Coalition Against Homophobia and the GLBTQ group on campus. Groups like Wa-High’s GSA can be extremely beneficial to youth questioning their sexuality, according to GLBTQ president Evan Griffis.

“It’s important to have a social support group for teenagers who are queer or questioning,” said Griffis. “I think specifically in Walla Walla, you can feel isolated because it is kind of a conservative place, but having that group on campus is really important.”

The GSA is not the only place for GLBTQ Walla Walla youth to express themselves. Triple Point, a program run through the Children’s Home Society of Washington, sponsors many activities for GLBTQ teens in Walla Walla, including dances and other social activities.

Last year, the GSA sponsored the Day of Silence, where students did not speak for a school day in support of students who have experienced bullying, and a No Name-Calling Day, with students writing down names they’ve been called and throwing them away. Both of these were in coordination with the Gay, Lesbian and Straight Education Network (GLSEN) to raise awareness.

The club has offered Safe Zone posters to teachers, indicating that a room is a safe place for expression, modeled after those found at Whitman, according to Tobin and Monahan. They’re planning to do these events again this year, in addition to meeting twice a week as a club.

As an advisor, Monahan positively expressed her feelings towards her students and Walla Walla.