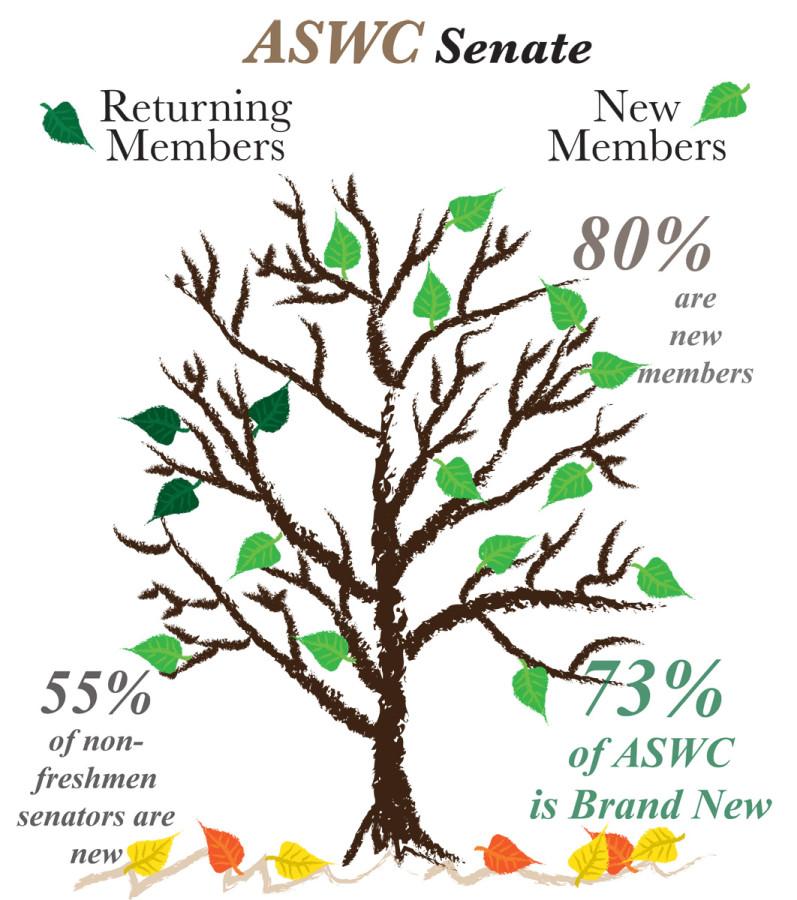 With results of the 2012 Senate elections in, major changes are in store for ASWC. In addition to the freshly elected first-year senators, this year’s ASWC has an unusually high proportion of new members in the Senate and on its Executive Council.

“We are having a major overhaul in the senate,” said ASWC president Kayvon Behroozian. Over 80 percent of the members of this year’s Senate are new senators, and over 55 percent of the non-freshmen senators are new. Including the new members in Executive Council positions, over 73 percent of ASWC members are brand new to their jobs.

“This is really unusual,” said Behroozian of the situation. The influx of new senators is mainly due to the high number of upperclass senators who chose not to run for reelection last year. Behroozian noted that several senators have vacated their senator positions for positions on ASWC’s Executive Council, while others decided to give up a chance at re-election due to other extracurricular commitments.

In addition to the number of vacated seats, interest in running for Senate was at an all-time high, especially among upperclassmen.

Although ASWC elections have always been open to the entire student body, in past years many appointed positions were nominated from within the Executive Council. Students with enough signatures could also petition to be put on the ballot, though this was less common as much of the student body often had little knowledge about upcoming elections. As a result, friends of already elected individuals were generally elected. Through the work of Behroozian and other ASWC members, this system has changed and applications for appointed positions are now open to all students.

“I made it my personal goal to â€¦ increase student involvement,” said Behroozian. “[Now] we have a lot more people running for elections and because of that we get a higher quality of people who are elected into office.”

“[One of the things I want to focus on is] working to change the way ASWC runs its elections to make it more socioeconomically equitable to run for office,” he said.

As for the ways in which ASWC’s new makeup will affect the coming year, both current and past members of ASWC are hoping it will prove beneficial.

“In terms of our ability to function, it doesn’t change [that]. In terms of new viewpoints, it will allow for new ideas and new viewpoints to be discussed and possibly decided on,” said Behroozian. “The new senators have less knowledge of precedents for passing budget requests and legislation, so their perspectives won’t be colored by those past decisions.”

“I think it’s really exciting â€¦ We don’t know how things were done in the past, and I think that allows for a lot of creativity as far as what we plan to do for this year,” she said, while adding that the role of veteran members is also vital. “A lot of the people that are leading [ASWC] right now have a lot of experience and can help us institutionalize our ideas.”

Some non-returning members acknowledged the advantages of a fresh senate, but also cautioned against completely forgoing methods used in the past.

“It’s important to reference back to past years and what the senate did then; that way you learn what things went well and where [and] how to improve in the future,” said junior Brian Choe, a former senator, in an e-mail.

Although there will be many new ideas coming into the ASWC office, all members, new and old, agree that staying in touch with the student body is a crucial priority for this year.

“I think that some of the problems with ASWC in the past have been due to people being so entrenched in the system and not really being able to think outside of the box or see what ASWC looks like to people who aren’t a part of ASWC,” said Boggan. “I see that as a big part of my job this year.”

Newly elected senior senator Eric Schmidt echoed that sentiment, while noting that it would take effort on the part of non-ASWC students as well.

“I would like to encourage Whitman’s students to really get to know ASWC,” he said in an e-mail. “ASWC is a reciprocal process, and many of these new senators want to get out and meet, talk and represent their friends, but all the Whitties have to help that happen.”

“I firmly believe that all governing organizations should be as transparent and accessible as possible, and that students should have a larger voice in these administrative committees,” said first-year senator Jack Percival.

Newly elected first-year senator Allison Kelly said that she is interested in creating good study breaks that will be “an awesome bonding experience” for first-years.

“Pretty much I want to strengthen campus unity, help create tools for students to maintain academic excellence, and give everyone the best experience possible at Whitman,” she said.

To help accomplish these goals, the Executive Council hopes to empower both new and old senators to make real changes.

“A lot of times, senators don’t realize how much say they have in the meetings â€¦ in the past, that’s been an issue, and I [also] want to change that this year. They think that they have very little say on what actually goes on for the ASWC meetings â€¦ but they do,” said Behroozian. “Basically, our meetings will be looking different this year â€¦ not only with all the new people but also [with] our procedure.”

And there will be a lot of senators to teach. Of the twelve senators last year who did not graduate, only three are returning to office.

With these exciting new changes in store this year, it’s no wonder that so many of the senators can’t wait to get started.

“I LOVE WHITMAN! And I want everybody to have the opportunities and ability to love Whitman just as much as I do!” said Kelly in her platform.

Note: Information about the ASWC nomination and selection process was corrected on Oct. 3, 2012.