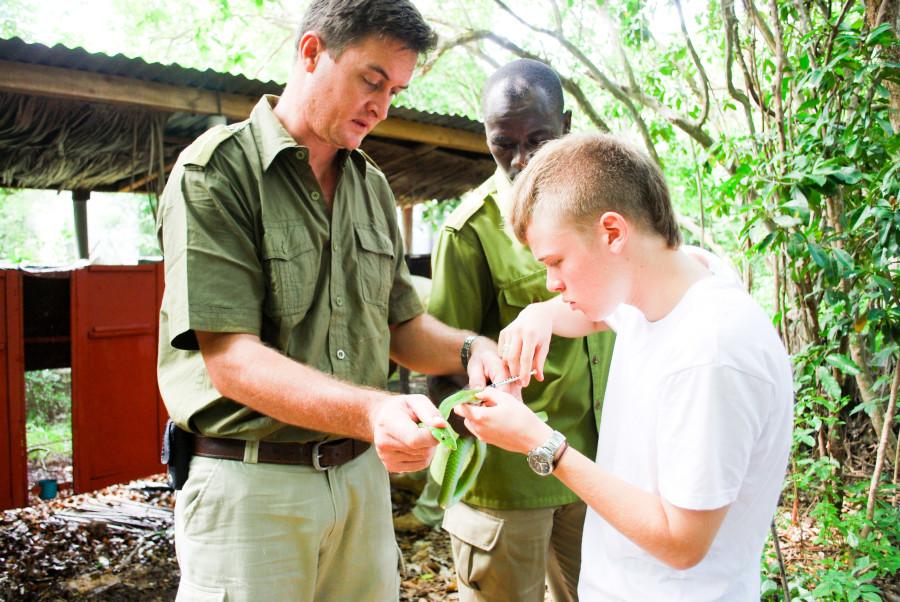 Senior Jordan Benjamin knew exactly what he wanted to be when he was growing up.

“I always knew that I wanted to be a herpetologist, but it took me a while to figure out exactly what that was going to mean,” said Benjamin.

He found his calling treating venomous snakebites in Africa. It was, however, a long process getting to where he is now: taking a leave of absence for the fall semester in BembÃ¨rÃ¨kÃ¨, a tiny town in Benin, West Africa.

Benjamin’s passion involves the Global Snakebite Initiative, a nonprofit organization based in Australia dedicated to addressing the neglected global tragedy of snakebite envenomation. Fatal snakebites occur primarily in poor rural areas, where immediate medical care is often unavailable. Affected populations often lack education on how to identify the snakes that bit them, which also contributes to fatalities.

When Benjamin got his EMT license before he started at Whitman College, he knew that he wanted to be involved in the medical field. Combining that with his herpetology background, Benjamin was led to the Global Snakebite Initiative, which allowed him to tie his training to his interest in venomous African snakes.

Working in rural areas with venomous snakes required a new approach: treating the snakebite without knowing what type of snake bit the victim. Last summer, Benjamin presented his solution at the Joint Meetings of Ichthyology and Herpetology in Minneapolis. His approach: identifying the type of snakes from the symptoms presented by the bite.

Donald Clarke, a fellow herpetologist and Whitman alumnus, traveled with Benjamin to present at herpetology meetings.

“Jordan discussed and presented his work with so much knowledge and confidence that he was actually mistaken for a Ph.D. student several times during the conference!” said Clarke.

Clarke and Benjamin also share another link: Kate Jackson, assistant professor of biology. She has been advising both of these young men on how to pursue their passions.

“I think Kate is the only person I have ever met who truly understands what drives me,” said Benjamin. “She has been chasing the same dream even longer than I have, and if she hadn’t taken a chance on me, I would never have … ended up where I am today.”

“He doesn’t do things in a casual way. He had used his savings as a teenager to go and learn how to correctly handle snakes at the … snake farm in Kenya,” said Jackson, when asked about Benjamin.

The snake farm Jackson refers to is in Watamu, a town in coastal Kenya where Benjamin spent a few days in the field and assisted at the Bio-Ken Reptile Research Centre and Snake Farm.

“[Jordan] is a young man of remarkable promise,” said Stephen Spawls, a scientist and author who worked with Benjamin at the research center in Kenya. “He’s full of enthusiasm for reptiles, and it’s his intention to do research on African snakes. Snakebite is a significant problem in rural Africa, and Jordan intends to do his bit to help curb the suffering caused by Africa’s deadly reptiles.”

Benjamin’s approach to the African snake problem is unique: diagnosing snakebites from the symptoms of the bite. A half million people are bitten by venomous African snakes per year; treating them, however, is difficult as each snake requires different anti-venom. Unfortunately, the majority of people in Africa are uneducated about identifying poisonous snakes. In order to understand the effects of a snakebite on a patient, the doctors need to understand the biology of the snakes present in that region, the biochemical composition and clinical effects of their venom, how the human body ticks and how to fix it when it doesn’t.

“[The challenge is] how to synthesize all of this information into an appropriate treatment plan when somebody is carried into the hospital at night and says that they have been [bitten] by a snake,” said Benjamin. This is not an easy project for a small group of individuals to undertake, but for Benjamin, it is worth it.

“I came here because I needed to stand on the front lines of the problem I intend to spend my life fixing and see it from the same point of view as the people who are dealing with it everyday,” said Benjamin. “To experience the same frustrations and obstacles, get the same dirt in my hair, blood on my hands, share in enough of the joys and tragedies of life here that I can come back and know exactly what the â€˜burden of snakebite in rural Africa’ means for a family.”