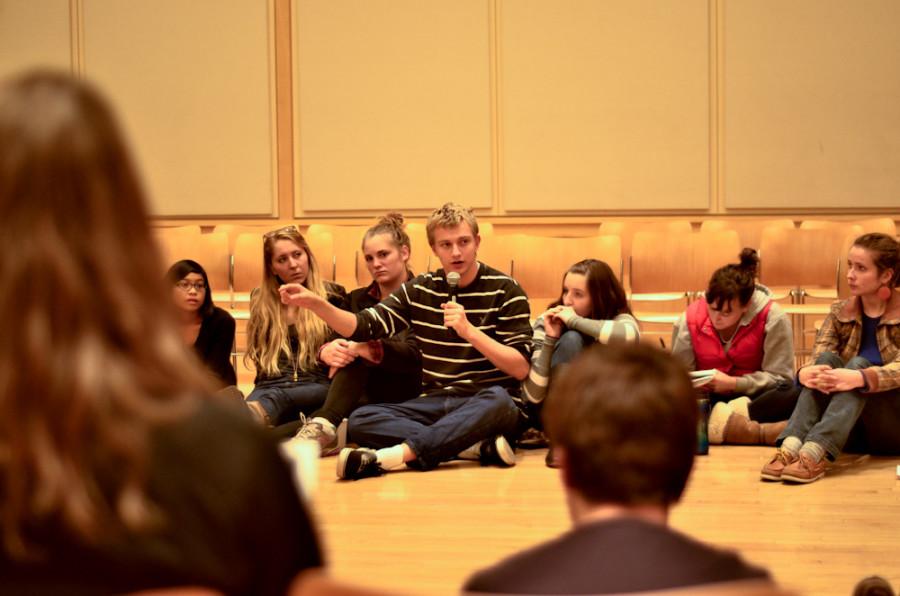 When prospective students apply to Whitman, they are required to write a short essay addressing the question of diversity.  Yet  despite Whitman’s focus on diversity,  some students remain concerned that a $320,000 decrease in available financial aid money and a shift from need-blind to need-sensitive admissions will ultimately curtail opportunities for students with lower socioeconomic backgrounds to join the Whitman community. Because of these concerns, ASWC chose “diversity” as the theme of this year’s first town hall meeting on Monday, Oct. 24, in the basement of Reid.

The meeting provided a forum for students to discuss their perceptions of diversity on campus.  Many students voiced their concerns about taking financial need into account when making admission decisions; they fear that a need-sensitive admission process would further homogenize the community. Because the discount rate: the number of cents given to students with financial need per tuition dollar, decreased from 41 cents last year to only 30 cents: Whitman will be less likely to admit students who have more financial need.

Associated Students of Whitman College President Matt  Dittrich began the meeting by inviting students to discuss what they wrote about in their application essays on diversity.

Junior Laetitiah Magara, who was born and raised in Kenya, said that she hadn’t felt conscious of her race before she came to Whitman.

“I’ve come to understand that I’m a student of color,” she said.

Dittrich said that students need to continue to think about how they contribute to Whitman’s diversity while they’re here.

“[The question we need to ask is:] How do we enrich the diversity once we’re already on campus?” he said.

Dittrich emphasized how the differences in students’ backgrounds constitutes one dimension of diversity at Whitman, but that the diversity of student activities on campus also contributes to the richness our community.

However, senior Daria Reaven thought that the college could even work on improving diversity of thought.

Reaven read a letter by senior Simi Singh, who was unable to attend the meeting. In her letter, Singh described her concerns about these budget cuts.

“Over the past few months, I’ve been made more aware of the discrepancies between the perceived importance of ‘diversity’ as it concerns the quality of our education here at Whitman and the resources that Whitman provides to support those minority students,” Singh said in her letter.

“When the administration, the faculty and ASWC are predominantly upper-middle class, white males (or are following in the footsteps of this demographic) how do members of ASWC (I’m asking the individuals within ASWC, not the formal ASWC stance on this matter) understand the potential for exclusivity and the potential to under-represent those students who are historically and socially in the minority: women, students who are not from the US, students from working-class backgrounds, students of color, students who are the first to attend college in their families?” she said.

Dittrich said that already this year, the number of “students of color” was down by 0.4 percent.

During the meeting, Dittrich mentioned that one potentially mitigating factor to the apparent trend of diminishing diversity is the Undocumented Students Resolution, which, if passed, would allow undocumented students to receive aid from the college. The Board of Trustees will vote on the resolution on Nov. 17 and 18. If it passes, Whitman will be the first liberal arts college and the second institution in the U.S. to enact a resolution such as this.

In an email, Dittrich discussed the history of the resolution.

Dittrich explained later in an email that he and senior Ariel Ruiz will advocate on behalf of the resolution.

“I have been given the high honor of meeting with the full Board that day to give an address on the state of diversity at Whitman and argue in favor of the resolution. As we begin to set tuition/financial aid targets for the next fiscal year (levers that drastically implicate ‘diversity’ in our community), advocating for this resolution couldn’t be more imperative,” he said.

Dittrich concluded the meeting by stressing the seriousness of the dialogue surrounding diversity and by encouraging students to talk to him about their concerns.