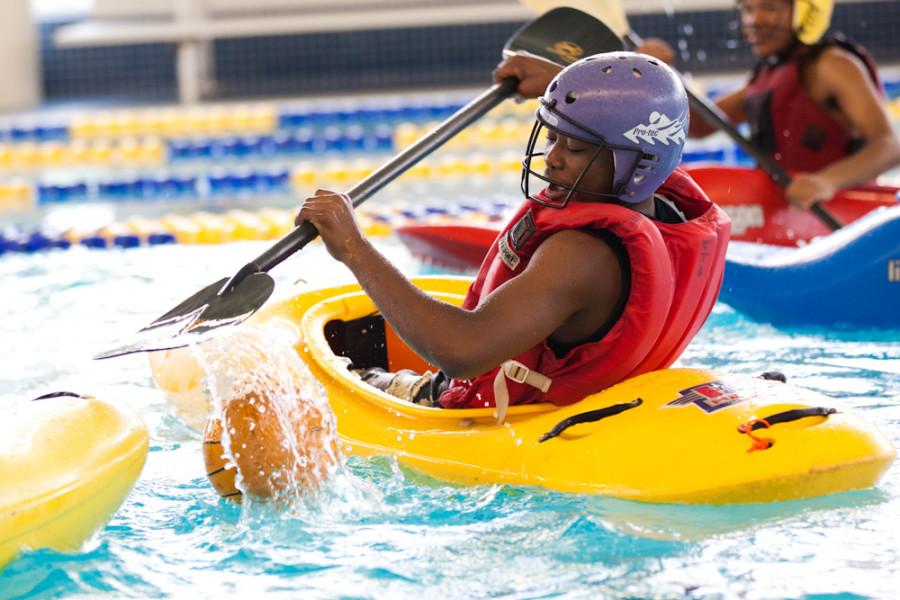 Every semester, the Intercultural Center (IC) sponsors an Outdoor Program (OP) trip as a way to encourage communication and community between the multi-cultural and international students on campus. This year, the ICC decided to try something new: sponsoring an on-campus OP trip. The trip took place on Sunday, Oct. 16, and consisted of both kayaking in the pool and climbing at the Climbing Center.

Matt Ozuna, the IC program advisor, was excited about the idea of an on-campus trip.

“I thought it would be a home run, a fun thing to do on a Sunday,” said Ozuna.

The IC advertised for the trip by sending personalized emails and mailbox fliers to the first-year students it works with. They also sent emails to the student listserv and the the multicultural clubs on campus.

However, on the Tuesday before the trip, there were only four people signed up. With so few students signed up, Ozuna was faced with the decision of canceling the trip.

Fortunately, by the end of the week, there were eight people signed up. They sent an open invitation for others to show up the day of the trip, and ended up with a total of 10 participants plus the two trip leaders, seniors Michael Barker and Adam Michel.

“I’m glad it was a small enough group to get individualized attention. It’s good for both the OP as well as for [the ICC],” said Ozuna.

Because the trip was advertised to the entire campus, the group was a mix of first-years and sophomores.

“There was not as much IC education [on the trip] just because we were scrambling to get the spots filled, so attendance became a priority” said first-year Gabie Brosas, an IC intern who also participated in the trip.

Almost all of participants on the trip had never tried kayaking or rock climbing at Whitman.

“I’ve never kayaked before, and I haven’t used the rock wall, and I figured this was a nice beginner level because of a lot of other people who didn’t have a lot of experience [were on the trip],” said Brosas.

The only trip participant who had ever kayaked or been to the climbing center before was sophomore Chelsea Cordell, who went on the trip for her outdoor leadership class.

“The trip fit into my schedule and my budget,” she said.

“I really like the idea of getting new people into the OP, especially the international students. The OP can seem like an exclusive club,” said Michel.

Despite the low turnout for the trip, Ozuna feels that it was an overall success and is already talking to his staff about what changes can be implemented for next year.

“It was definitely worth the experiment. We usually try to do our events early in the semester and aim them at freshmen . . . It was productive nonetheless. We’ve taken feedback from students and interns and are thinking about moving this up in the schedule for next year and definitely promoting an IC OP trip as early as the Activity Fair during opening week,” said Ozuna.