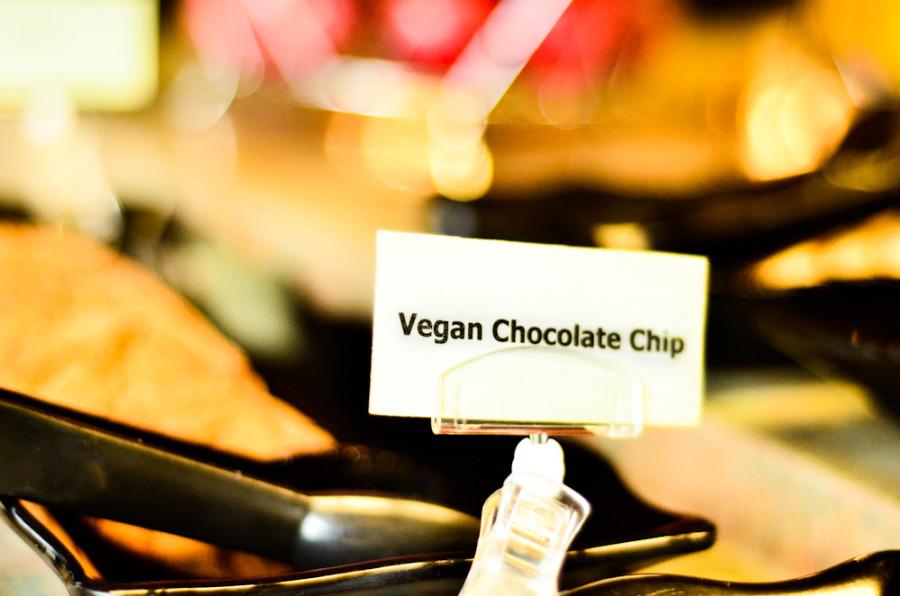 While some students worry about gaining the Freshman 15 when they head off to college, other students with food allergies or intolerances are more focused on whether the dining halls will provide food that will keep them healthy. Of the nearly 800 students who are on a meal plan, many of them need to address daily the task of getting enough to eat. In the dining hall environment, this can prove to be difficult.

According to the Bon Appétit meal plan pamphlet found online, Bon Appétit “regularly accommodates these students by working with them on an individual basis to develop a plan that will enhance their daily diet needs.”

Prentiss Dining Hall Manager Susan Todhunter offers to meet with students weekly to go over the week’s menu and recipes so they know beforehand what is and is not available to eat.

“Even people with the same disease have degrees of what they can or can’t eat, along with their personal likes and dislikes,” Todhunter said regarding students with food allergies and intolerances.

According to Todhunter, it’s often the case that students just need to know what kinds of foods are available at the dining hall or what viable alternatives there are. In special cases, however, Todhunter ensures that accommodations are made, but stresses that students must have a doctor’s recommendation to be specially accommodated.

Sophomore Genevieve Jones, who has Celiac Disease, which prevents her from eating gluten, met with Todhunter weekly during her first semester at Whitman.

“[Todhunter] went to the ends of the earth to make sure that I was getting enough to eat and that I had options. If there wasn’t a protein option because of the wheat in pasta dishes, she made sure there was chicken left over, and at the pasta bar she had someone cook gluten-free pasta in a separate pan,” she said.

In situations where these accommodations can’t be made, the dining hall can be a scary place for students with food intolerances and allergies.

“When making a food choice [could] make you ill, you get a feeling of anxiety in an area like ours where students don’t necessarily respect not cross-contaminating things,” said Todhunter.

Senior Laura Coulson, who has a severe peanut allergy, experienced a very stressful situation in her sophomore year. After eating something that was not labeled as containing peanuts, she experienced an allergic reaction and had to go to the hospital. After some investigation, Todhunter discovered that the dish had accidentally contained peanuts.

“Susan Todhunter really went out of her way to find out who made the mistake of putting peanut sauce in that dish and not labeling it. That was a little bit of an adventure of a week, but within the week they had paid my hospital bills. They went out of their way to fix it as best they could. I feel like [Bon Appétit] is really accommodating to food allergies, and this was just an incident of a mistake,” said Coulson.

The dining halls have enacted many changes to provide a more stress-free environment. One such change is the placement of various items on the salad bars so that foods containing dairy or gluten are less likely to get cross contaminated with other produce.

Coulson also mentions that the toast area is another area at-risk of cross contamination.

“By the toast in the morning, there is peanut butter everywhere, and that’s just students being sloppy with it so I just don’t eat anything near that. If you ask someone, they will pull you out fresh jam if you really want that,” said Coulson.

Another area that presents a problem for students who can’t eat gluten is the sandwich bar.   Although Bon Appétit offers gluten-free bread, gloves that have touched bread with gluten in it can cross-contaminate food for students with Celiac.

Sophomore Libby Fones, who also cannot eat gluten, commented on the need for improvement in terms of sandwiches in the dining halls.

“If you are somebody that has the most strict gluten allergy, it becomes really difficult to actually eat in the dining halls,” she said.   “For example, [with sandwiches] you have cream cheese as your only option because if you go to the sandwich bar, everything that they have there touches all the breads with gluten,” she said.

Three years ago, Todhunter began seeing an influx of students who couldn’t eat gluten and decided to set up a “made without gluten” station for students with gluten-free diets.  This station cannot be called “gluten-free” because the dining hall environment is not completely gluten-free.

“Someone who is seriously allergic to airborne flour or nut allergies, we just can’t serve. We have to be upfront with what we can and can’t do,” said Todhunter.

Junior Natalie Jamerson, who now lives off-campus and is not on a meal plan, is one of the students who benefited from the made without gluten station. Jamerson is a vegan by choice and a self-proclaimed gluten intolerant: she gets stomachaches when she eats gluten but has not gotten a blood test confirming her intolerance.

“Whenever you have a specific dietary choice you have to realize that you’re not always going to have exactly what you want . . . It is impractical for the handful of vegans to demand a huge change in Appétit’s meal plans and offering,” said Jamerson.

Because students with eating restrictions are unable to eat everything in the dining hall, the meal plan can sometimes be seen as too expensive. According to Jamerson, however, the many options and special accommodations in the dining halls evens out the costs and benefits of a meal plan.

“Looking at the value of what I eat, compared to what others eat, there’s no question that I am overpaying for my food, especially looking at the meat and dairy component of it.   But it is a luxury to have all the fresh produce and thoughtful dishes, rather than just mac-and-cheese and pizza all the time,” Jamerson said. “In that respect, if there weren’t options for me: if there wasn’t a good salad bar and sometimes an entrée: I would be really upset, but also I understand the constraints under which Bon Appétit is working.”

Todhunter acknowledges that providing for everyone is a difficult job.

“It’s harder than it was 20 years ago [to feed everyone]. It used to just be meat and potatoes. To satisfy all those varieties, to do the whole spectrum of vegans to meat and potatoes, it is more complicated,” she said.

For some, like Jones, eating at the dining hall became unfeasible because of health reasons. While Jones tried for two months to eat well in the dining hall, a blood test revealed that gluten antibodies in her system were still too high. With a doctor’s recommendation, Jones was able to petition to get off of the meal plan.

“What I really liked about the dining hall is the community it inspires. I would pursue all options before I would consider [going off of the meal plan],” Jones said.

With a clean bill of health, Jones is now looking into creating a club which acts as a support group for people with food intolerances and allergies as a way to inspire a community of students both on and off the meal plan.

“It’s a leap of faith in trusting someone to prepare special food for you. It can be very hard,” said Jones.