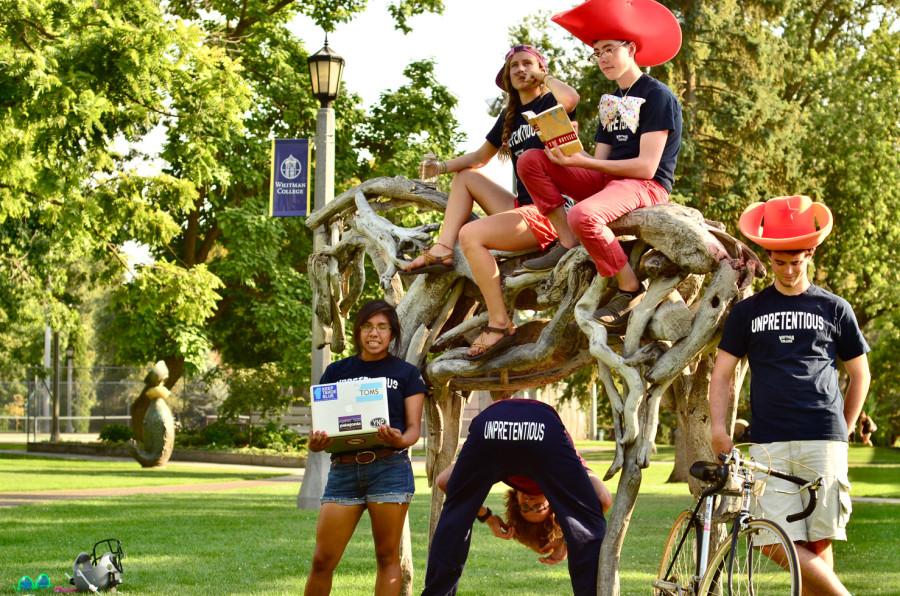 Whitman boasts an unpretentious culture, at least according to its website, but is it pretentious to say so? A new line of “unpretentious”-branded t-shirts and sweatpants from the Whitman Bookstore has Whitties wearing the new statement with ironic pride.

The new apparel, with “Unpretentious” printed across the front of t-shirts and the back of sweatpants, was inspired by a design shown as a joke in a presentation at Whitman’s annual Staff Development Day earlier this year. The first shipment arrived in mid-August, and bookstore employees say they’ve flown off the shelves since–as of Wednesday, Sept. 7, only one XXL t-shirt and four XL sweatpants remained unsold.

The use of the word “unpretentious” stems from an eight-month-old theme on Whitman’s website: academic excellence, unpretentious Northwest culture and engaging community. The administration, which worked with Zoom Marketing of Palo Alto, Calif., to create the theme, has asserted that prospective, rather than current, students were the intended audience for the message. Still, students have expressed frustration with the term, finding that  it is rather pretentious to call oneself unpretentious, as highlighted in an article in The Pioneer last April.

Sophomore Ben Menzies, who purchased one of the t-shirts last month, said that he bought the shirt because he disagreed with the “unpretentious northwest culture” slogan.

“If you wear it and call attention to the weirdness of the slogan, you’re disassociating yourself from the slogan, which I appreciate because I don’t necessarily want to be associated with unpretentious Northwest culture,” he said.

Menzies said that while he thought it would be pretentious to wear the shirt uncritically, he didn’t think that would happen at Whitman.

“I don’t think anyone saw the shirt in the bookstore and said, ‘Yeah, I’m unpretentious, I should wear that shirt,'” he said.

Sophomore Russell Sperberg said he bought one of the t-shirts as soon as he saw someone else wearing one. For him, it was a funny extension of the irony in calling the school unpretentious.

“I think the specific use of the word creates a problem because calling yourself unpretentious is sort of pretentious,” he said. “A majority of the campus , if not embarrassed by ‘unpretentious Northwest culture,’ thought it was weird . . . By making t-shirts, you’re moving beyond embarrassment and saying, ‘Look at how ridiculous this is.'”

Assistant Vice President of Communications Ruth Wardwell, who worked on the marketing theme, said that though the t-shirts and sweatpants use the word “unpretentious” out of context, she is glad to see students share their school pride.

“I hadn’t anticipated using unpretentious without its context of ‘unpretentious Northwest culture,'” she said. “But I’m fine if students are having fun with that and celebrating their college because in fact there is an unpretentious culture,” she said.

While Wardwell is fine with Whitties making fun of themselves, she is concerned about how those outside Whitman would view the shirts.

“It’s one thing when we on campus use it ourselves . . . if we laugh at ourselves. It becomes a whole other thing when the external world laughs at us,” she said, adding that she wants Whitman to be respected.

“The bookstore runs the bookstore. There’s no censorship,” Thorpe said.

Rather, Thorpe said she ordered only one set of the unpretentious shirts and sweatpants. A second half of the order will arrive soon. But Thorpe said there are no plans to order more shirts, even if the new shipment flies off the shelves as quickly as the first batch.

“I don’t re-order t-shirts. I only run them once, except the favorites,” she said, referring to the classic t-shirts that say “Whitman College.” “That’s just retail. You can’t keep the same thing on the shelf and expect it to turn.”