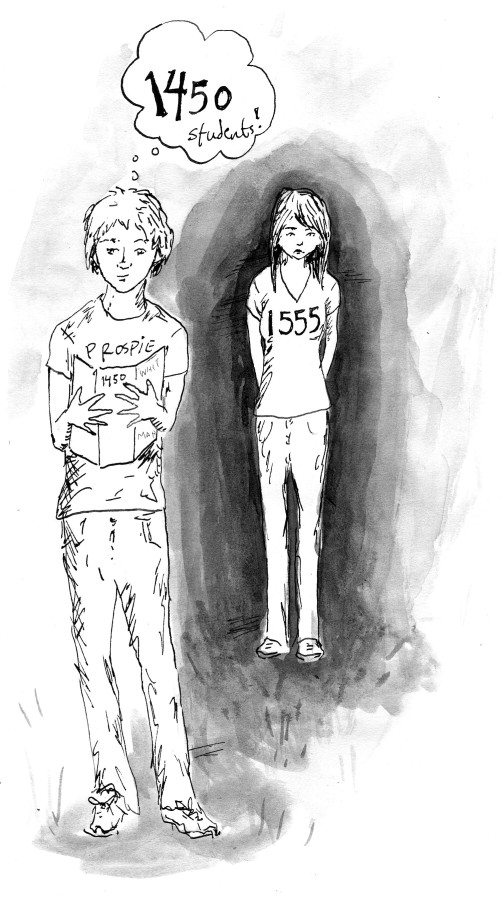 Take a look at the brochures on display in the Office of Admission, the course catalog, or the Fast Facts sheet on the college web site and all will tell you that the number of enrolled students at Whitman College is 1,450.

However, a look at the Factbook put out by the Office of Institutional Research lists the college’s enrollment for fall 2010 as 1,555.

Because of the differences in numbers, the student-faculty ratio changes depending on the document. In the course catalog and most admissions brochures, it is listed at 10:1. But on the Fast Facts page on the web site, it is listed at 9:1. The actual ratio for fall 2010 was 9.89:1.

Though these discrepancies seem strange, the explanation might actually be very simple: printing costs and changing numbers make it much easier to print a simplified average than an exact number. Neal Christopherson, director of institutional research, calls 1,450 a “ballpark figure.”

“It’s meant to be a nice, round number. Since the actual enrollment changes every semester, the brochures are going to be a little off,” he said.

Ron Urban, registrar, said that fluctuations between semesters is a big factor in the number discrepancy.

“The Factbook says 1,555 as the number for fall enrollment. The number in the course catalog reflects an average during the year,” he said.

Christopherson said that 2011 spring enrollment was closer to 1,480.

Kevin Dyerly, director of admission, called the changing number a “moving target.” The fluctuation in enrollment numbers between semesters was one of several factors contributing to difference between admissions brochures and the Factbook.

He also discussed the effects of this year’s large incoming class on the numbers.

“When we printed brochures in April, we didn’t know 440 students would accept the offer to come to Whitman,” he said.

He also addressed how the printing schedule makes it impossible to change admissions numbers as frequently as Factbook numbers.

“It’s cheaper for college to print a two-year supply of things. Because of this, we’ve stuck with a round 1,450, which represents a historical average,” he said.

Both Urban and Dyerly claimed that if numbers consistently remained above 1,500, they would make changes to the numbers listed in the catalog and admissions documents.

“We’ve been using essentially the same publication with minor edits since 2005. We will probably be making more substantial changes within the next year and we might adjust enrollment numbers then,” he said.

Dyerly believes that for now 1,450 serves its purpose.

He believes the number discrepancy is justifiable.

“We have no intent to be sly about enrollment numbers. We’re just dealing with a constantly changing figure,” he said.

“Whether the total enrollment is 1,555 or 1,450 does not  necessarily misinform students because in either case, the student body is really small,” he said.

Burns feels that the enrollment number isn’t the most important number for incoming first-years. He thinks that numbers of class size are much more important.

“Prospective students would have a better picture of academic life at Whitman if they knew more specifically the average size of 100-level classes, 200-level classes and so on, rather than just the total enrollment figure or average class size,” he said.

Because of the recent 3-2 switch, the admissions viewbook’s class size information is somewhat off. It lists the percentage of classes with 31-40 students at three percent, whereas the Factbook has this percentage ranging from 4.5 percent to this year’s 11.5 percent, a sudden increase of 153.8 percent.

Prospective student Molly Emmett said she would like to see publications reflect the bigger student body. Coming from a high school of 4,500 students, she saw Whitman’s small size as a potential detriment. She would’ve been glad to see 1,555.

“I think 100 students is a considerable difference — that’s 100 more people that you have the opportunity to learn from, be inspired by and form lasting friendships with. In an already small population, 100 people are a noticeable percentage,” she said.

First-year Claire Vezie doesn’t feel that the number discrepancy would have affected her decision to come to Whitman.

“I was looking for small schools, but small ranged from 1200-2000. One hundred students wouldn’t have made a difference,” Vezie said.

“After visiting Whitman, I knew it was what I wanted. One hundred students wouldn’t have made a difference. Both numbers are very small,” she said.