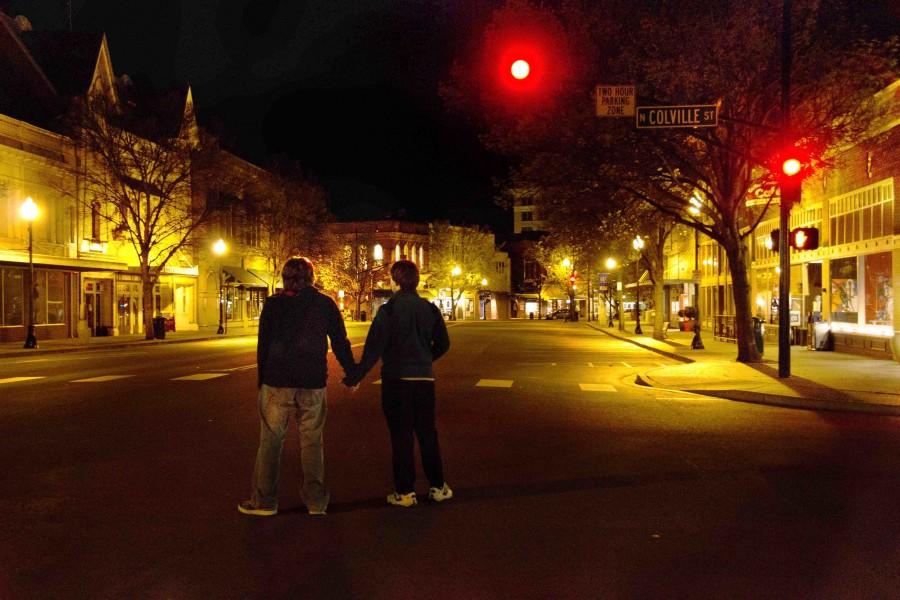 Many LGBT teens struggle to find confidence and self-esteem; LGBT youth in Walla Walla face additional judgment and scrutiny from their community, where openness and support is not always forthcoming.

Members of the Walla Walla Community College Gay-Straight Alliance can offer perspective on queer adulthood in Walla Walla, where intolerance most commonly takes the form of silent discomfort regarding sexual minorities, rather than outspoken hatred or violent acts.

“I don’t think it’s such a big kept secret, it’s just something that people don’t want to talk about,” said one member, who wishes to remain anonymous because she is not out publicly. “It always backfired against me, I didn’t get the job, didn’t get the promotion … It’s not that people care so much that you’re gay, it’s that they see you as a troublemaker for wanting to say so.”

This woman has found that homosexuality is something that is kept under the surface in Walla Walla — while hatred is not openly expressed, the ‘don’t ask, don’t tell’ mentality makes her feel that her sexual orientation is unacceptable here. For this reason, she is only out amongst the friends that she can trust.

“I am a member of this most despised minority … People still equate you with child molesters, people who do bestiality,” she said, blaming these assumptions on people who are, “using ignorance and fear to further their political agendas.”

Lisa Thursby, another GSA member, is an ally to LGBT students at WWCC.

Beth Powers, a counselor at WWCC and staff contact for the GSA, talked about the difficulties of home life for LGBT students.

“We have a member who wanted me to take him off the e-mail list — he couldn’t risk his family finding out,” Powers said. “They suspected he was gay, they had asked him and he denied it. His father asked him, ‘Are you gay? Because if you are I might as well kick the shit out of you right now.’ It would not be acceptable to that man’s extended family in this community for his son to be gay.”

Powers noted that circumstances vary; she added that some students’ families are accepting.

“At the same time, I know parents who are very supportive of their children and have the courage to face any discrimination that might come their way as a result,” she said.

Powers agreed that the presence of LGBT individuals goes unacknowledged in Walla Walla.

“People don’t know that they know gay people,” she said.

Derek Jentzsch ’93 remembers a time when this silent treatment regarding homosexuality extended to the Whitman campus. Jentzsch knows the challenges of being gay in a small-town, conservative community; he lived them. Whitman was a very different place when Jentzsch attended the college in the early 90s.

“There was a real feeling that being gay was a death sentence in and of itself, not really tied to HIV. That was the message from the dominant culture in a lot of ways. There was a feeling, internalized, that coming out could be bad for your life,” said Jentzsch about the stigma surrounding homosexuality.

Jentzsch said he was the only openly gay man during several of his years on campus.

“I’d had a boyfriend in high school, but one of the reasons I came to Whitman was I thought it would keep me straight,” Jentzsch said.

This didn’t last long. Whitman’s administration and staff supported him when he came out in his sophomore year, Jentzsch says, but some members of the student body were less accepting.

“A lot of really awful things happened. People broke into my room as an RA, trashed my room … they broke the glass on the paintings, wrote “die fag” … my roommate and I on one occasion found a dead duck on our doorstep that said ‘you’re next,’ [and another time] a chipmunk head with anti-gay slurs attached to it.”

In response, Jentzsch became an outspoken proponent of gay rights, safe sex and the open expression of sexuality. He railed against the environment of repression at Whitman in several letters to The Pioneer during the 1992-93 academic year:

“To enforce the community standards, you must censor my language, the clothes I wear, the people I make love with, [not fuck, the pejorative that simplifies all intimacies between two men] and the manner in which I have sex. Since all that is offensive, you must control me, subject me to your standards and, offend me” (Letter to The Pioneer, 4 Feb 1993).

Jentzsch’s letters challenged the atmosphere of homophobia at the college that caused gay and lesbian students to remain closeted. Jentzsch says that because he was so desperate to start a conversation, he deliberately used language that would offend and incite his classmates. He succeeded; four weeks of response letters were printed in The Pioneer.

Looking back on his letters now, Jentzsch remembers the emotions that prompted them.

“Oh god you found my article,” he said, laughing. “How embarrassing. I was so young … I was so angry.”

Change started to occur. A GSA started at Whitman in the ’91-’92 school year. Students and faculty began LesGayBi week, an annual event.

Whitman is unquestionably a better place now, and Walla Walla is less violent too, Jentzsch says.

“People won’t take that next step, partly because they realize it’s not worth it, and partly because the people who are rabidly full of hatred, they’re a lot older. I think Walla Walla is better off than it was before,” said Jentzsch.

Jentzsch’s experiences at Whitman have shaped his career. He has campaigned for gay rights and worked in AIDS prevention. Jentzsch currently works in international development and recently taught a course at Whitman as an Ashton J. & Virginia Graham O’Donnell Visiting Educator in Global Studies. His story exemplifies the It Gets Better campaign started by Dan Savage, but those at Triple Point will be the first to tell you that Walla Walla still has a long way to go.

Triple Point is a group that provides a safe and accepting community for local LGBT youth and allies. It was started by Heather Rodriguez in 2007.

Walla Walla’s queer youth face additional challenges on top of the difficulties of being a teenager, Rodriguez said.

“They have one life at school, and go to Vista [Youth Center in Tri-Cities] to be real.”

Triple Point’s youth have reported experiencing both verbal and physical bullying at school, according to Rodriguez. Family acceptance is also an issue.

“We occasionally talk to a youth with a good experience, but it isn’t the norm,” Rodriguez said.

Sometimes families kick youth out of the house because of their sexuality or gender identity.

“I only know of two or three cases,” said Rodriguez. They weren’t youth that regularly attended meetings at Triple Point, but they contacted the organization looking for help.

Unfortunately, there aren’t many places for these youth to go.

“We had a 20-year-old homeless male … here, out, nowhere to go,” said Rodriguez.

Rodriguez remarked that while she could give the youth names of organizations in Walla Walla where he might find assistance, she wasn’t certain that they were safe spaces. She said that religious connotations in the names of Walla Walla’s support facilities can alienate the youth.

“The religious attachment to the name can be a problem,” she said. “A lot of them don’t have a lot of appreciation of the religious culture, and this is a pretty religious town.”

Although Triple Point is located at the Children’s Home Society, near both of Walla Walla’s high schools, interaction with the schools is limited.

At Walla Walla High School, Triple Point is allowed to put up fliers — nothing else. At Lincoln Alternative High School they are allowed to go in, and in the past have shown the documentary film “Straight-Laced.”

“Lincoln is a lot more open,” Rodriguez said. “I’ve heard that from a lot of youth.”

Neither Wa-Hi nor Lincoln have a Gay-Straight Alliance or similar organization. Though there is interest in starting one, the bureaucratic process makes it difficult.

“They are given the runaround,” Rodriguez said. “The process takes a long time; often it’s May by the time they finish. This happened the last three years.”

After high school, many of Triple Point’s youth choose to leave Walla Walla for a more LGBT-friendly place, according to Rodriguez. For those who do not, the hope for an accepting community remains distant.

“There’s still a lot of fear in this town,” Rodriguez said.