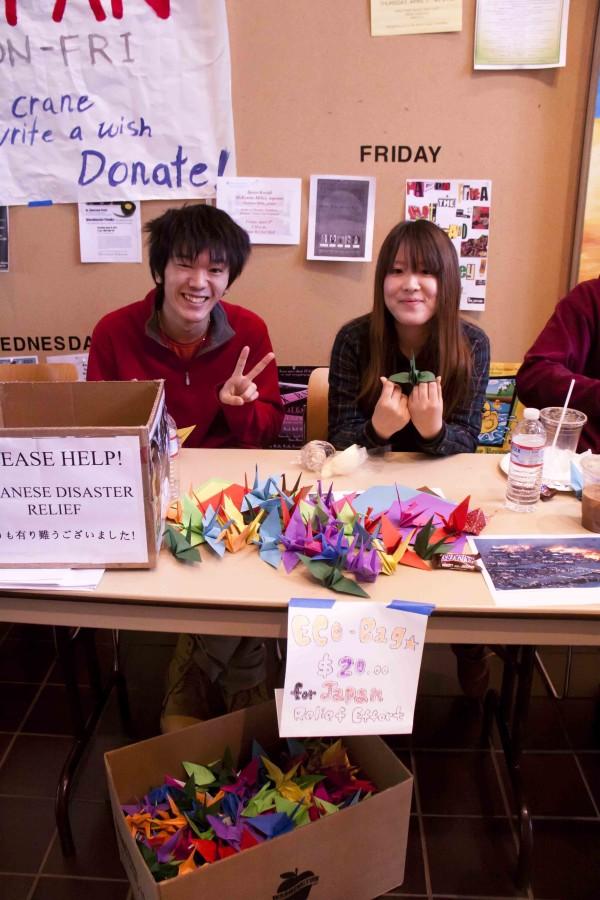 Nearly a month after a devastating magnitude 9.0 earthquake hit Japan on March 11, Whitman students and faculty are stepping up to help out. The nuclear fallout from the earthquake also led a class that was planning to go to Japan this summer to cancel last week.

Throughout this week, students and faculty from the Asian Studies Department are tabling in Reid Campus Center during the lunch hours to make origami cranes to show goodwill. They are also raising  funds for the Japan NGO Center for International Cooperation (JANIC).

The goal is “to make people aware on this campus of Japanese and to let Japanese people know that we care,” said Hitomi Johnson, adjunct instructor of Japanese. “I know some people say Japan is such a rich country, they don’t need any aid, but there is such extensive damage that I think anything will help.”

Johnson said the goal was to make 1,000 origami cranes, based on the Japanese legend that making 1,000 cranes can make one’s wishes come true.

At the table with her were two students who experienced the earthquake — Daichi Kusano and Rino Miyazaki from Nagano University in Ueda City, part of the Nagano prefecture of Japan. Here for a few weeks to improve their English skills, both were appreciative of students’ efforts.

“I experienced criticism from parents and friends for going abroad in this turmoil rather than contributing at home. To come over here and to participate in fund raising and to see people supported is encouraging,” Miyazaki said.

“They’re honored to participate and raise awareness; they feel like this is their purpose to be here,” added Johnson.

The ultimate goal is to send the 1,000 cranes, along with the money they raise, to Japan.

In contrast, one group of Whitman students will not be going to Japan — at least not this year. Cross-Cultural Psychology in Japan, a class being led by Assistant Professor of Psychology Deborah Wiese, was officially canceled on April 1. The group had planned to spend a week of intensive study at the Johnston Wilderness Center followed by two weeks of fieldwork around Japan this summer.

Wiese said that she made the decision in consultation with Director of Off-Campus Studies Susan Brick and Provost and Dean of Faculty Timothy Kaufman-Osborn based on Whitman’s policy of not sending students to places with a U.S. State Department warning.

“Because we’re less than two months to the departure, we had to make a decision. Even if the State Department warning were lifted tomorrow, there’s still concerns,” Wiese said.

Wiese, who is from Japan, said she was excited about offering the fieldwork course based on her experience in similar classes as an undergraduate.

Even though she thought it would probably be safe to go on the trip, she said that the mood of the country would likely affect the trip.

“Some of the communities we are going to are still dealing with the disaster. They will welcome us, but I also know that their attention is currently focused on the disaster,” she said.

For sophomore Charlotte Hill, who was scheduled to go on the trip, the cancellation was not surprising.

“I was disappointed but not necessarily surprised,” she said. “I’d been signed up for a pretty long time, we had heard what we were going to do, there would be homestays, which sound pretty cool.”

Wiese, though, is optimistic that the class will happen next year instead.

“It’s very likely that this class will happen next year,” she said, noting that a grant for the class could be transferred to a future trip. “I’m really hopeful.”