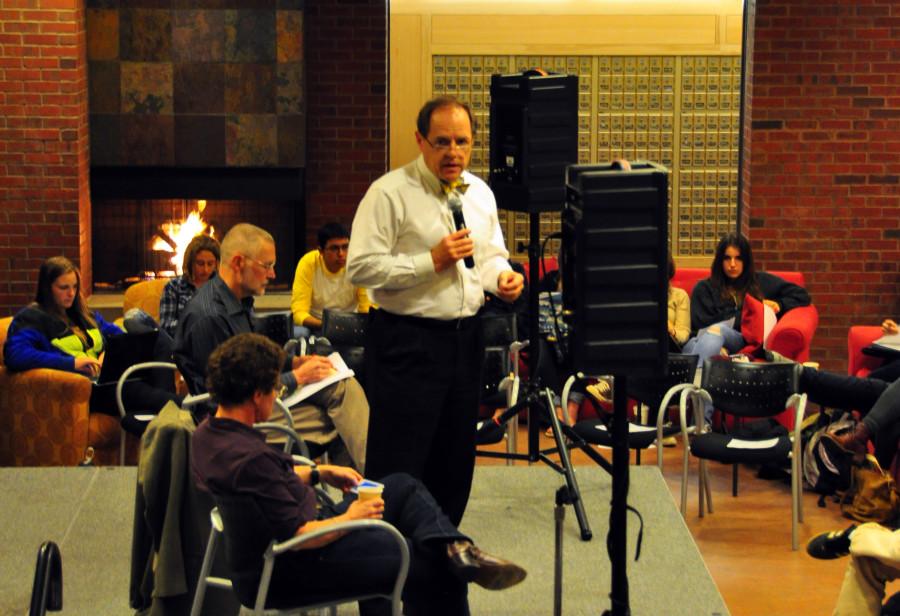 ASWC representatives and Whitman students gathered in the basement of Reid for the fall 2010 Town Hall. Andrea Dobson, professor of astronomy and chair of the faculty, Timothy Kaufman-Osborn, provost and dean of the faculty and President George Bridges came to discuss the problem of enrollment pressure and to answer student questions regarding the issue.

The first cause is the size of the student body. The class of 2014 is the largest incoming class in Whitman history with roughly 440 students. The entire student body is also larger than it has ever been: about 1535 students.

The second cause is the switch from a 3-3 to a 3-2 course load. Because professors only teach five courses a year, there has been a decrease in the number of course sections offered. Originally 17 percent of sections were going to be cut, but the administration worked to decrease that percentage. This year, the number of sections taught has decreased by 10 percent.

The third cause is the issue of course compression. Too many courses are being offered within a few popular time slots–10 a.m., 11 a.m. and 1 p.m.–which makes it harder for students to find courses that don’t conflict with each other.

Because of enrollment pressure, class sizes have increased. In fall 2007, the average class size was 16.9; now it is 19.

After conducting a survey last spring, Loranger and ASWC feel that this issue is one of the most disconcerting for students at Whitman.

“We’re concerned that enrollment pressure could potentially threaten the academic experience at Whitman,” he said.

Bridges, Dobson and Kaufman-Osborn acknowledge that enrollment pressure is a serious issue. They shared with the students their plan to combat the issue.

Dobson said that the departments within the faculty are working on creating a web program that will allow them to view each other’s proposed schedules for the next year. This will help them to better coordinate the timing of courses and therefore to lessen the problem of course compression.

However, the panel also pointed out to students that some of the causes of enrollment pressure are also beneficial to the college. Kaufman-Osborn focused especially on the long-term benefits of switching to a 3-2 course load.

Firstly, he believes the switch will be beneficial in recruiting and retaining new faculty members, a necessity for the college. Other liberal arts colleges have moved to a five-a-year course load, and in order to compete, Whitman had to follow suit.

“My ability to hire the best new Ph.Ds in the country affects you directly in the classroom,” he said.

Kaufman-Osborn and Dobson both feel that the switch to a 3-2 system will enable the faculty to spend more time with students individually.

“You are all seeing the transition phase now. In the long term, there will be benefits,” said Dobson.

However, Kaufman-Osborn and Dobson also expressed regret at not soliciting more student input in the decision-making process to switch to a 3-2 course load.

Loranger presented to students four ASWC-suggested methods to increase course offerings and decrease class sizes. They suggest an expansion of the O’Donnell Lecture Series, a series of short, one-unit lecture-based courses, in order to give students more course options. They also plan to research 14 of Whitman’s peer institutions to find other responses to the problem of enrollment pressure. And lastly, ASWC supports the push to hire more tenure-track faculty members.

During the question and answer session of the meeting, one student also proposed holding some course sections at noon.

Several students also brought up the importance of communication between the administration and the student body.

Junior Sam Lundberg said the he would love an update from the administration on a regular basis.

“I have faith in the administration, but there is some kind of divide between them and the students,” he said.

Loranger echoed this when he said that it is crucial that students attend Town Hall meetings because it is rare that students have the opportunity to talk to all of these administers at once.

“When students come to Town Hall, they show the administrators that they are passionate about these issues. Then administrators see that these are things worth paying attention to.”