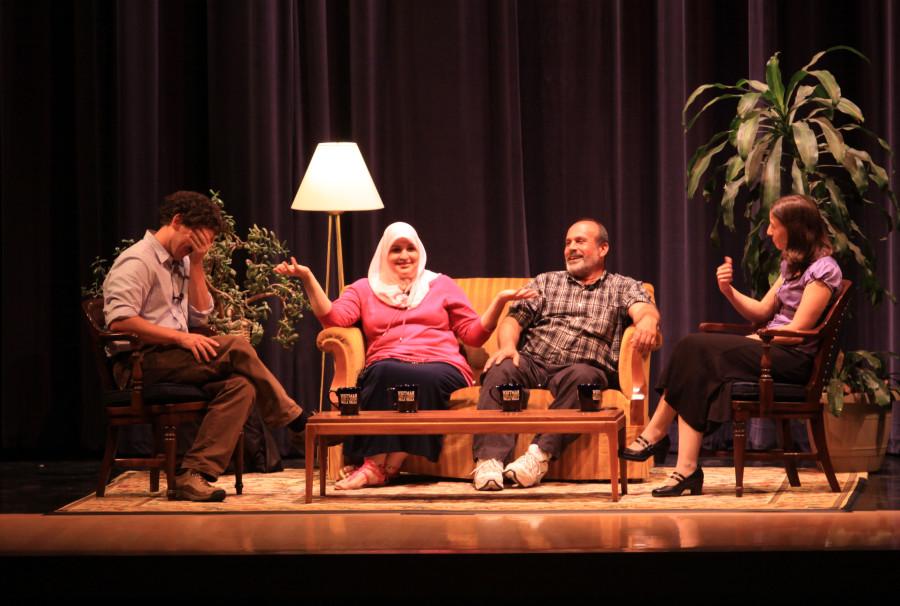 Dave Eggers, Abdulrahman and Kathy Zeitoun and Jocelyn Hendrickson, assistant professor of religion, sat down on a couch in front of a packed Cordiner Hall on Tuesday, Sept. 28, to discuss “Zeitoun,” the class of 2014 summer reading selection written by Eggers. Both Whitman College students and the Walla Walla community came together to hear about Eggers’s writing process and the Zeitouns’ experiences.

Kate Kight, a student academic adviser in Lyman House, introduced Eggers and the Zeitouns with high praise. In her introduction, she spoke of their “intangible and indestructible family bond” and their story of “constant boundless hope.” She also spoke of the book’s many honors and awards, and claimed that it showed “the power of a simple canoe.”

Eggers claimed that what initially struck him most about the Zeitouns’ story was the image of a solitary man paddling around a deserted New Orleans looking to help people in the aftermath of Hurricane Katrina.

Hendrickson followed up where the book left off, asking the Zeitouns about their kids and Kathy’s post-traumatic stress disorder. She also asked them questions about their faith and why Abdulrahman continued to pray so diligently while imprisoned at Camp Greyhound.

Abdulrahman described prayer as a direct connection to God.

“When you connect with Him, you are under His protection,” he said.

Though these are undeniably powerful aspects of “Zeitoun” and the presentation, many Whitman students attended because they were most interested in simply seeing the Zeitouns in person.

Sophomore Ryann Savino, a transfer student who, like first-years and other transfer students read “Zeitoun,” enjoyed seeing the Zeitouns outside of their role as characters and instead as regular people.

“They are just humble people who have done really amazing things,” she said.

She also enjoyed comparing the book portrayal of Kathy and Abdulrahman Zeitoun with what she observed during the lecture.

“It was nice to see that the book was true to how they are,” she said.

Andrew Johnson ’09, the Resident Director of Lyman House, believes that seeing the Zeitouns in person can add to one’s understanding of the book.

“Having the Zeitouns here gives us an opportunity to look at the text differently–not just as a work to analyze,” he said. “Academic analysis is wonderful, but it’s also important to realize that the Zeitouns are not just characters. It adds a layer of depth to the book and makes our challenge as young scholars much greater. We have to be honest to these people while we analyze.”

Students said the conversational format was beneficial in depicting the reality of the Zeitouns’ story.

“It was more relaxed,” said Savino. “In this setting, the conversation could go where it wanted. And it was nice to see the dynamic between Kathy and Abdulrahman and Eggers. They seemed to be genuinely good friends.”

In this relaxed setting, the audience was also able to see the Zeitouns’ personalities. Despite the fact they had arrived in Walla Walla only an hour before the discussion due to flight delays, both Kathy and Abdulrahman seemed quite comfortable throughout the presentation. They even joked with each other and with Eggers.

Kathy said that when Eggers first came to interview them, she and Abdulrahman were not exactly sure who he was but didn’t think to look him up.

“I didn’t Google him until the third year of interviews,” Kathy said as the audience laughed.

First-year Jenni Doering was especially glad that the audience could interact with the author and with the Zeitouns.

“What Eggers wrote was important to him, but his importance is different than what we as readers found important. By asking questions, the audience could address what they found most important,” she said.

The final question of the discussion was particularly powerful. A student asked Eggers whether or not he believed it was true that this generation–the generation of Whitman College students–lacks empathy.

Eggers said that there is nothing less accurate.

“This generation is well-informed, globally-thinking and activist-minded,” he said.

This is important because the goal of “Zeitoun,” he said, is to make it so that the readers might empathize with people different than themselves.

“Having ‘Zeitoun’ chosen as the selected book for an incoming class is the ultimate validation that I have accomplished something,” he said.

Sophomore Erin Carnahan believes that Eggers’s words are a call to action.

“What he said about our generation is a compliment and also a challenge. We need to make it a goal of ours to be well-informed, globally-thinking, and activist-minded.”