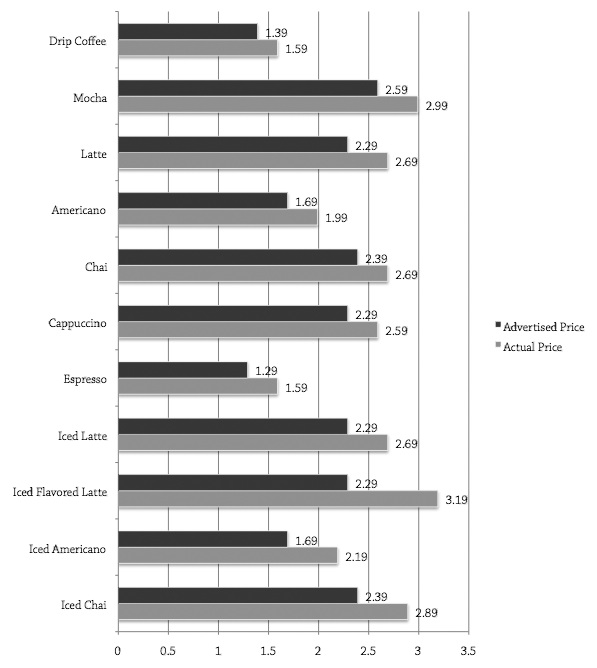 A comparison of menu prices and actual prices for small beverages at Reid Espresso and Café 41. Bon Appétit's menus, which came down this week, had not been updated since a price increase at the start of the semester. Credit: Boggan

Last time you ordered that large café  mocha at the Reid espresso stand or at Café 41 in the library, you may have paid more for it than you thought. Or more than the menu board suggested, anyway.

Prices on both menu boards have been out of date since Bon Appétit’s annual price increase at the start of fall semester, in most cases by about 30 to 40 cents. For instance, a large cafe mocha now costs $3.59, not $3.29.

Roger Edens, general manager of Bon Appétit’s Whitman operations, said Tuesday, Dec. 8, that he was unaware the menu boards had not been updated.

“It was something that should have happened in the summertime before we opened, and I thought it had happened and it hadn’t,” he said.

In some cases, the price difference is more than just nickels and dimes. A small iced latte listed as $2.29 rings up as $3.19.

Bon Appétit took down the menu boards on Tuesday, a day after The Pioneer first inquired about the price disparity. A statement posted on espresso carts apologizes to customers for the mistake.

“I wish they would have caught it in the first week,” Edens said, noting that nobody had brought the price difference to the attention of the Bon Appétit management.

Teresa Maddess, catering director of Bon Appétit, says the signs are out of date because of difficulties in finding new lettering.

“I had to find someone who will do new vinyl lettering,” she said. “The person that did the sign previously is out of business.”

Several employees of Reid Espresso were aware of the disparity, although not of its extent.

“Some of them are different by 10 cents, some by 15 cents,” said one employee.

Edens said that the correct prices should have been posted despite difficulties with the lettering.

“The board should have come down and there should have been temporary menus, but it fell through the cracks,” he said.

First-year Hadley Mowe was annoyed by the price gap.

“It’s kind of scandalous,” said Mowe, who orders from Reid Espresso once a week. “With however much I went, I think it would make a difference. They should have the right prices up.”

Sophomore Emily Coba did not find the wrong pricing to be as big of a deal.

“I have enough flex where it doesn’t really matter to me, but I know a lot of people who are already out of flex,” she said.

Senior Alex Cassidy noticed the price difference when he paid $1.72 for his small drip coffee on Tuesday, more than the listed price of $1.39, even after tax.

“I noticed it when I bought it, but I figured it was something they hadn’t updated,” Cassidy said.

In its apology to customers, Bon Appétit said it would offer medium and large drinks for the price of a small during the remainder of the semester “to make things right and to help with your caffeine needs during finals.”

If you order four medium mochas per week, the special will save you $3.00, but you will have already paid an extra $16.20 more than the menu prices specify over the course of the semester.

Bon Appétit promises to have correct menus up after winter break.

“They will be updated right after Christmas,” Maddess said.