Memorabilia: An Exploration of Objects 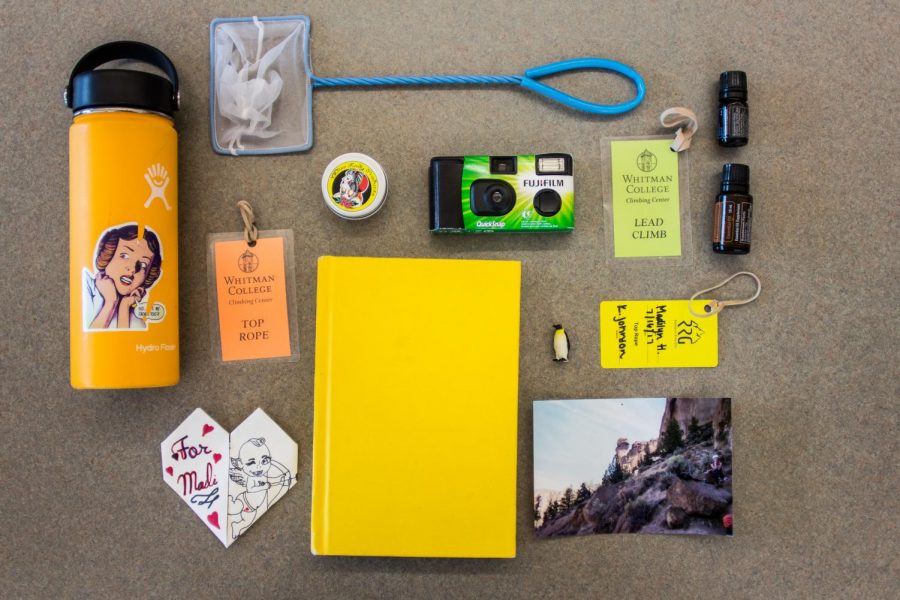 We asked four students to bring us objects that they deem significant–things that they have accumulated over their time at Whitman and from their lives before. Taken out of the context of their rooms and their lives, we explore memory and identity through the chosen items. But what were the qualifiers? And how do those memories change over time?

I was trying to think about the things that have changed the most for me in the past four years while I’ve been in Walla Walla. So for me, it’s been a lot of finding my queer identity–my identity as trans–and becoming more comfortable in my own skin. And then I chose things that I’ve made, that have good memories attached to them: like my guitar strap that I made sitting on the porch of the that house I really love. And the manual that I wrote with one of my really good friends, and my journals from the last ten years. 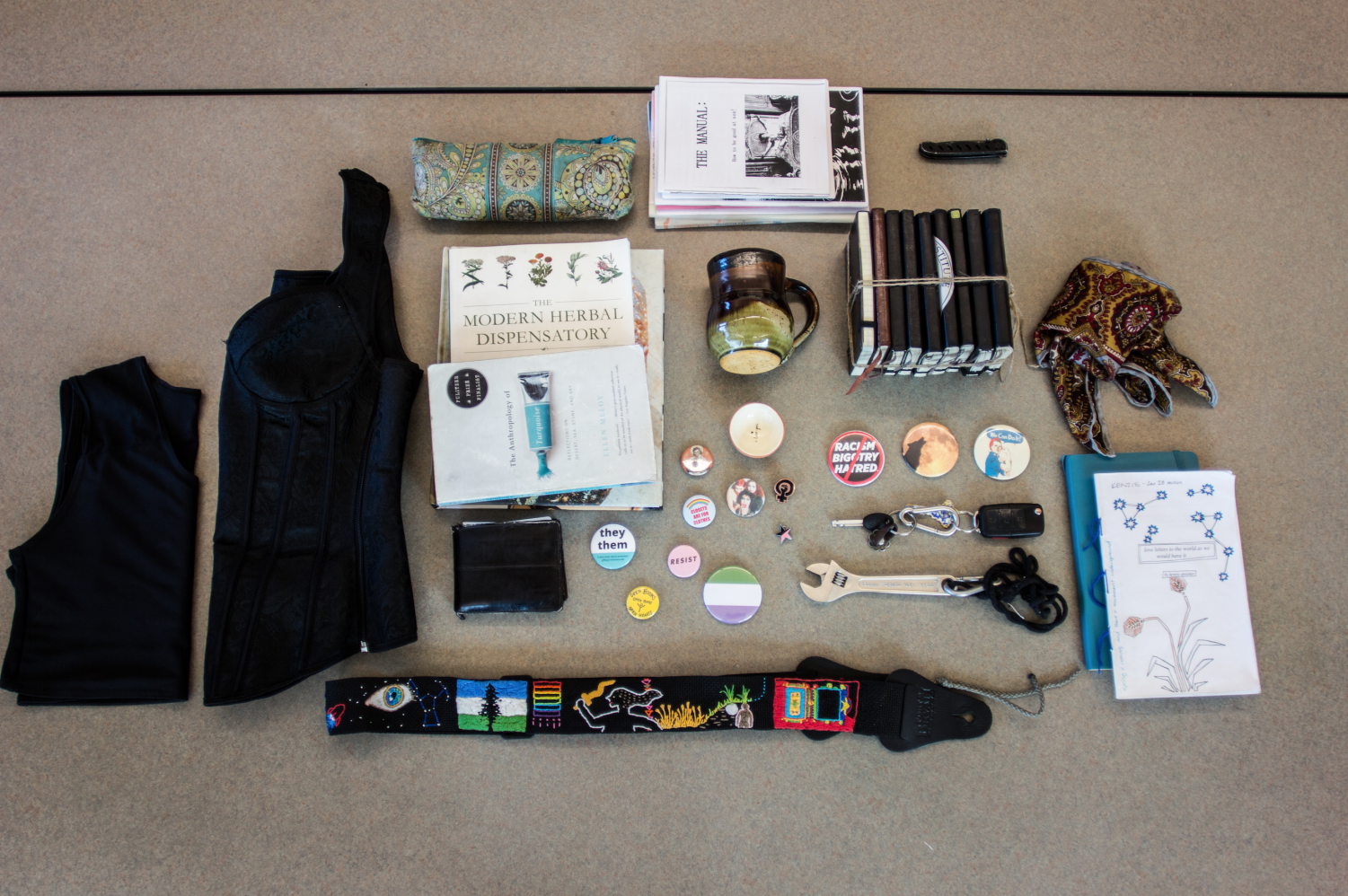 Are these all things that you see yourself taking with you?

Oh yeah. These are some of the things that I think I would grab in a fire, if I had to. That’s why I keep all the journals tied together. These are my journals since I was eight.

Is it weird seeing them in this format?

I don’t think so. This is kind of what I do whenever I move. I’m on my sixteenth bedroom of my life right now, and so I do a lot of hopping around. Whenever I move, I spread everything out, and see what’s precious to me and what’s worth taking. So this feels familiar.

Do you think this looks like a representation of yourself?

I think it’s as good of representation as I could scramble together on a slightly hungover Sunday morning.

I brought my big Obama book because I love him so much. Whenever I’m sad, I look at the Obama book and everything is fine. My mom went to a library conference a couple weeks ago and the people who made the book were there, and they had one copy, and my mom was like, “My daughter’s obsessed with Obama and she’s running for the president of her college… Could I please have this book?” The last day of the conference they gave her this book for free (and it’s like a fifty dollar book). She shipped it to me from Philadelphia, which was really really nice. I miss Obama so much. 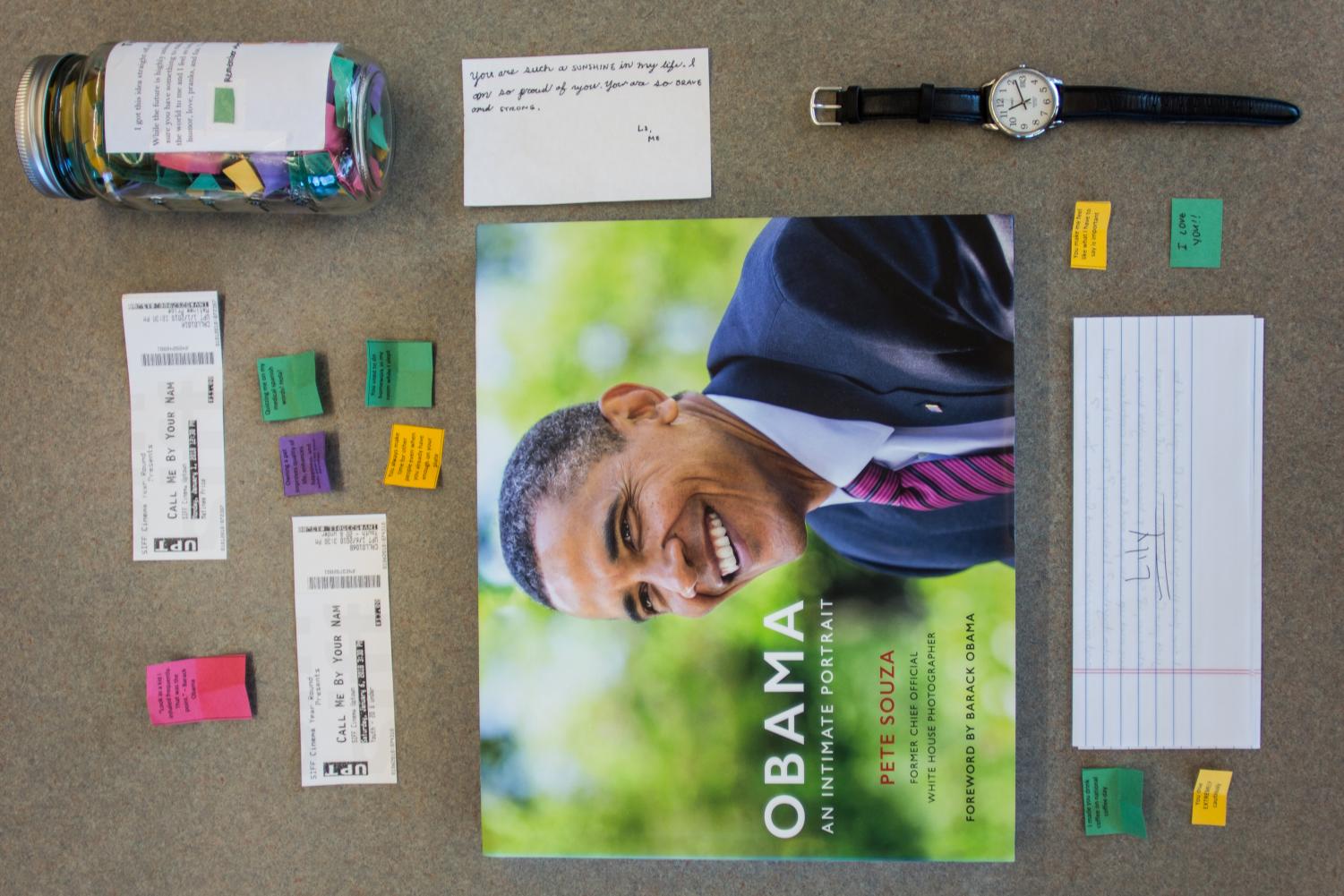 The jar contains memories that I’ve had with Claire. When she thought I wasn’t going to come back to Whitman, it was a way that we could be connected even if we weren’t talking everyday. Both for fall semester and for spring semester, I really struggled with coming back to Whitman, the physical act of that, and when I read those I felt a lot more ready to come back and that happy things have happened here. They’re very cute. I love Claire a lot and they make me very happy.

This letter is from my partner the first time I took the class at the Penitentiary, and he wrote me this really long letter for the day that we left. It’s just really really sweet, and he made such big impact on my life, so getting this letter  was really special because I got to know that I also made a really big impact on his life. He’s an important person to me, who obviously I’ll never be able to see again, so it’s nice to have one thing from him. I think about him a lot so it’s nice to have a physical manifestation of our time together.

I brought two tickets from “Call Me By Your Name.” I went to go see it with my mom and I was immediately like, “This is going to be Brahm’s favorite movie that he’s ever going to see in his entire life.” So then I took Brahm to it and he ended up seeing it three more times. It’s such a beautiful love story, but I spent most of the movie watching him fall in love with the movie and the characters. He just loves love so much. I really liked the movie; it has changed Brahm’s life.

I brought this note from Elise that I always keep up. It’s very sweet; she gave it to me with flowers during an especially tumultuous time. It’s just a nice reminder that someone cares. I have all the notes she’s given me saved in a special spot.

This watch was my dad’s from the ‘80s. I have a lot of his clothes–there was one day that I realized that I was wearing his socks, pants, shirt, and belt. I have so much of his stuff, I think because we are pretty similar. It’s nice to have things of my dad’s to remind me of my connection to my family.

Was it weird going through your room and picking things out?

Kind of… I left a lot of stuff that is precious to me that I wouldn’t necessarily feel comfortable sharing with others. I found myself going through and thinking to myself, “Okay who are the five most important people in my life; I need things from each of them.” As I went through, I realized I didn’t need that–I didn’t need to pick up something that was less important just because I felt like I needed to represent a certain person in my life. It doesn’t mean that they aren’t the most important people to me even if I don’t have specific items from them.

So when you went through you were thinking about the objects as being tied to people?

I chose my items because of how often I look at them, honestly. They represent the person I have become here at Whitman. Since coming to school, I have completely reinvented myself as a woman, student, and friend, and these object embody the relationships I have created and how they have shaped me into the person I am today, who is someone I am quite proud of. 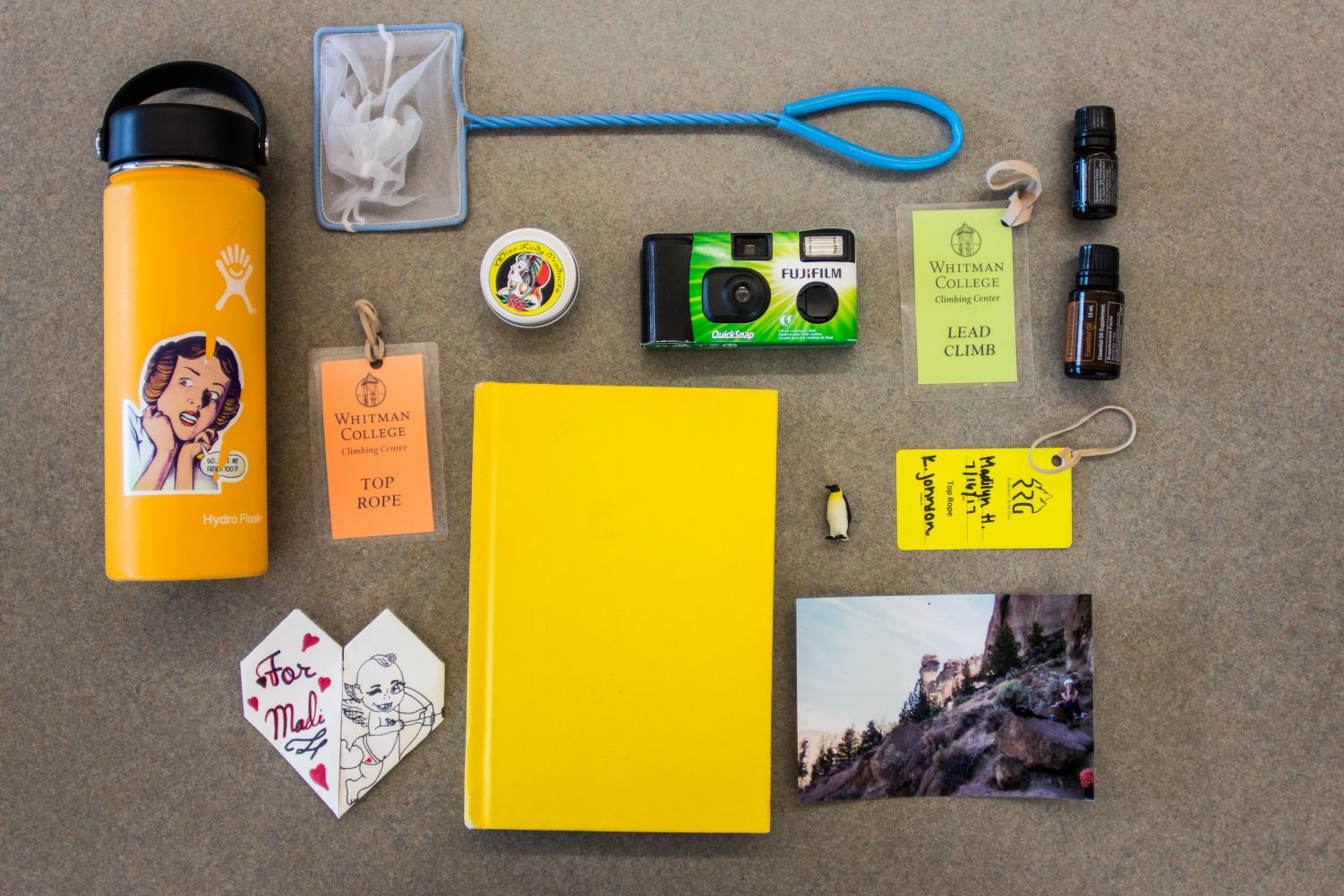 These objects carry a good deal of emotional baggage. Most of them have connections with my friends, some closer than others, and being able to look at and handle these objects allows me a space to reflect on some of the most important people in my life. As an extrovert who is deeply invested in the people around me, my happiness relies heavily on the interactions I have with others and these objects serve as temporary pseudo-friends / reminders of the people who I love and connect with most, even when those people cannot be with me physically.

Is it weird seeing it in this format?

Outside of the context of the room, this stuff looks like garbage.  An old, barely used art journal. Bottles of half used essential oils. A weird Valentine’s Day card. Alone, each of these objects stand alone as weird, kind of funny, but mostly generally useless pieces of junk, but each of these items has taken part in a large, influential change in my college years. Once you see them all together in my room, however, they come together and just make sense. They are very ‘me’, but I suppose the same way that I may be interpreted by others in contexts outside of my comfort zone.

Do you feel like these are things you’d take with you when you leave?

I will probably keep most of them, but I cannot imagine keeping them all. What is important to me now will probably not be important to me when I leave Whitman. My climbing certifications are null in other gyms and who knows if I’ll always have a pet fish. As I change, so do the things I choose to keep around.

I chose the things that I brought mostly because of their sentimental value. I don’t have much stuff in my room because I like to have a minimalist set-up, so the things that are in my room don’t take up too much space and have a lot of meaning. 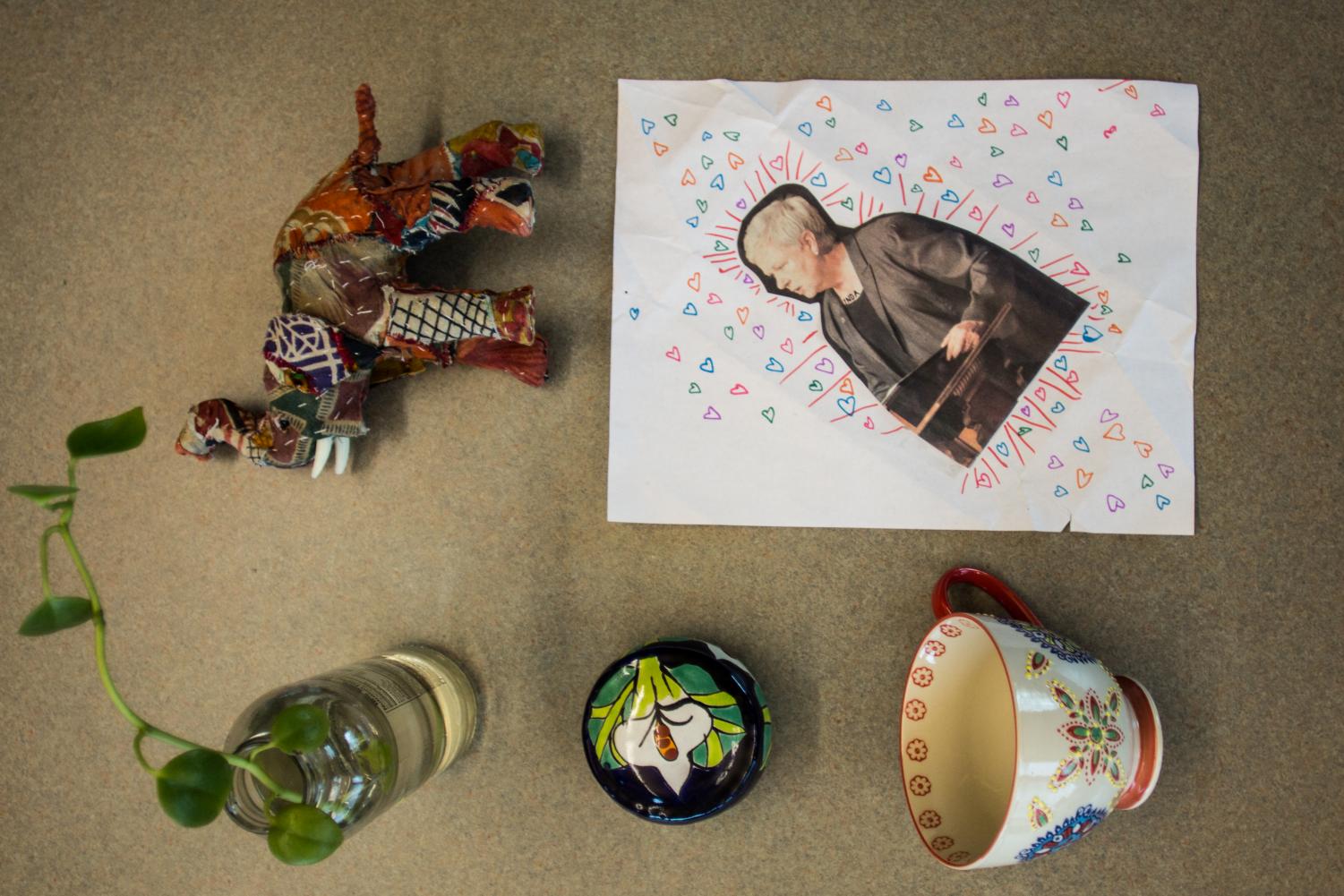 The mug that I brought was given to me by a friend during the first weeks of school. We had just met and went on a trip to Goodwill together. She held onto the mug for me while I was in the dressing room, and when I came out she handed the mug to me and said she got for me!

The plant was given to me by another dear friend.

For my birthday gift, another one of my friends didn’t have any wrapping paper, so she wrapped the gift in a paper that had Kathy Murray’s image and some decorations around it because she knows how much I admire Kathy Murray. It has been hanging up on my wall since then!

I got the elephant for free at the student activities fair in the fall. I love elephants and have a bunch of elephant figurines at home so I was happy to find it and it made me feel much more at home in my room.

Also the jewelry box with the flowers on it is special to me because another one of my Whitman friends gave to me in our secret Santa gift exchange and she brought it from home in Mexico.

Is it weird seeing them in this context?