Birkenstock-clad student gets frostbite on toes 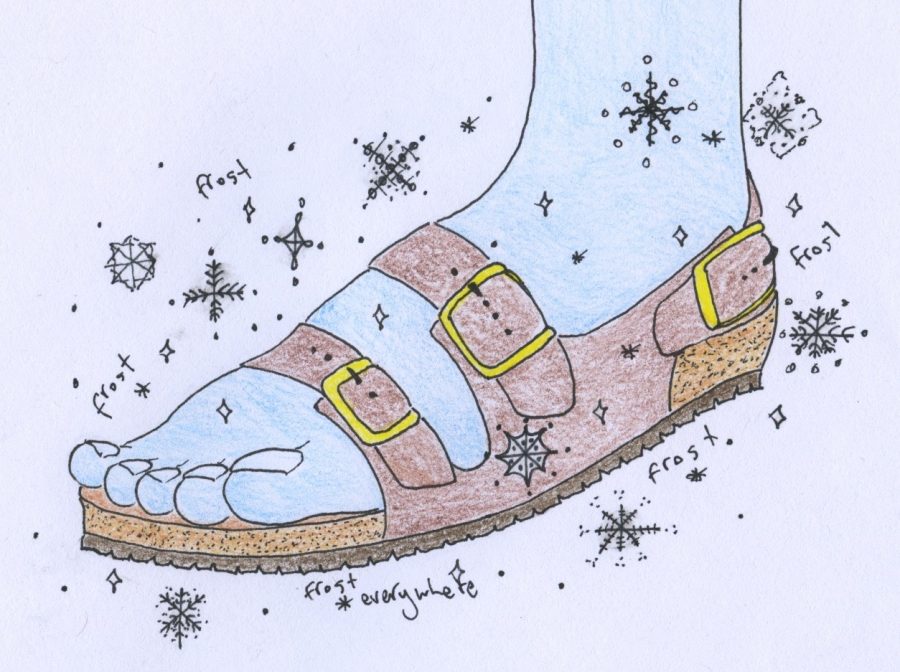 The cold season is upon us; we feel it in the frosty morning air and the freezing fog. However, some students are not willing to give up fashion relics of a warmer season — and they are beginning to pay the price. Student Chad Grayson has taken a stance against the chill by wearing Birkenstocks well into the cold weather.

“At first, I thought since every other guy on campus was doing it, I could get away with it,” Grayson said. “My toes would get pretty cold, but what was I going to do? Put on a pair of closed-toed shoes and admit defeat? I swore that as long as I was alive, I’d wear open toe shoes without socks. And it would’ve stayed that way, if I hadn’t gotten frostbite.”

Grayson began to lose feeling in his toes, but he ignored it and continued to wear his sandals. A week later, he was brought into the health center when his toes began to turn blue and sensation would not return to them. He was quickly rushed to the hospital, where doctors are currently working to restore warmth to his feet.

“We get about a dozen cases like this per year,” stated Dr. Charlotte Proctor, one of the doctors taking care of Grayson. “I’m not quite sure what possesses these students to continue wearing Birkenstocks when the temperature reads below zero. Maybe it’s a boost to their ego. Maybe it’s a dominance thing — whoever’s toes can withstand the temperature is the big man on campus. But seriously, what are they trying to prove? That they’re so mighty that their toes don’t get cold? Whatever the reason may be, it’s neither safe nor fashionably savvy. Quit wearing sandals everywhere and put some actual fucking socks and shoes on, you’re not Jesus.”

Grayson is expected to make a healthy recovery and should expect to return to classes soon. In the meantime, he’s just chilling with all his other frostbitten friends.