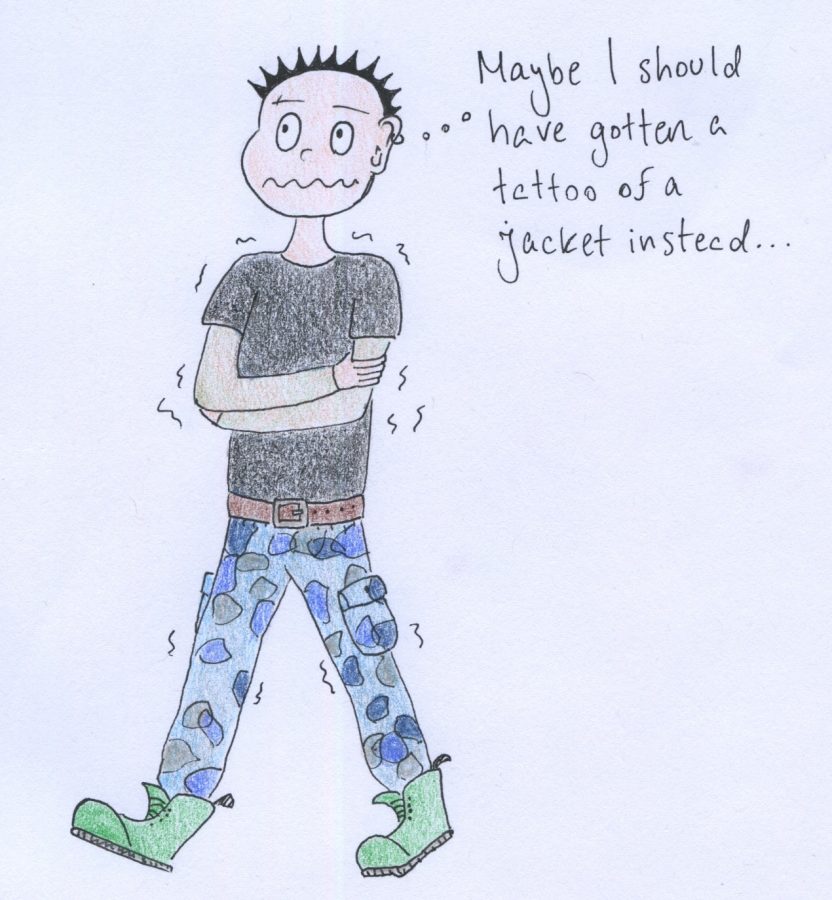 Elise Sanders, Are You Satisfied?

Autumn’s arrival in Walla Walla brings with it torturous cold air and freezing nights. Local man Aubrey Snow, wishing to combat the cold and save money on a winter coat, developed a seemingly foolproof plan by having jacket sleeves tattooed on his arms.

“You know, I figured it would be a long term investment,” remarked Snow. “I wouldn’t have to worry about outgrowing jackets or having to buy new ones when they get old. I’d just, you know, have the ink to keep me cozy. Plus, tattoos always look cool.”

The rest of the community, however, had differing opinions.

“I didn’t really understand it,” said local tattoo artist Amy Lincoln, who tattooed Snow’s sleeves. “Like, yeah, I get it. Tattoo sleeves are cool, but jacket sleeves look kinda goofy as tattoos. And besides, what’re you going to do when it gets warmer?”

“Well, you see, I didn’t factor that in to the equation,” Snow said, when asked about his plan. “But after I got the tattoos, I figured I could just get laser surgery to remove them. But then I stepped outside and noticed I was still cold, and also that would cost me more money than if I had just bought a jacket. I’m very disappointed and I feel like I’m being made a mockery of.”

According to Snow, he has been harassed by many members of the community, including his father, who reportedly keeps inquiring of Snow his motives for getting his arms tattooed.

“It doesn’t matter, he just disregards everything I say,” reported Snow. “He just keeps calling me an idiot for getting the tattoos in the first place. I thought it would work, but it didn’t. Please stop harassing me, Dad. I’ll still be able to get a job with all of my tattoos.”