The adventures of Hawk and Ham 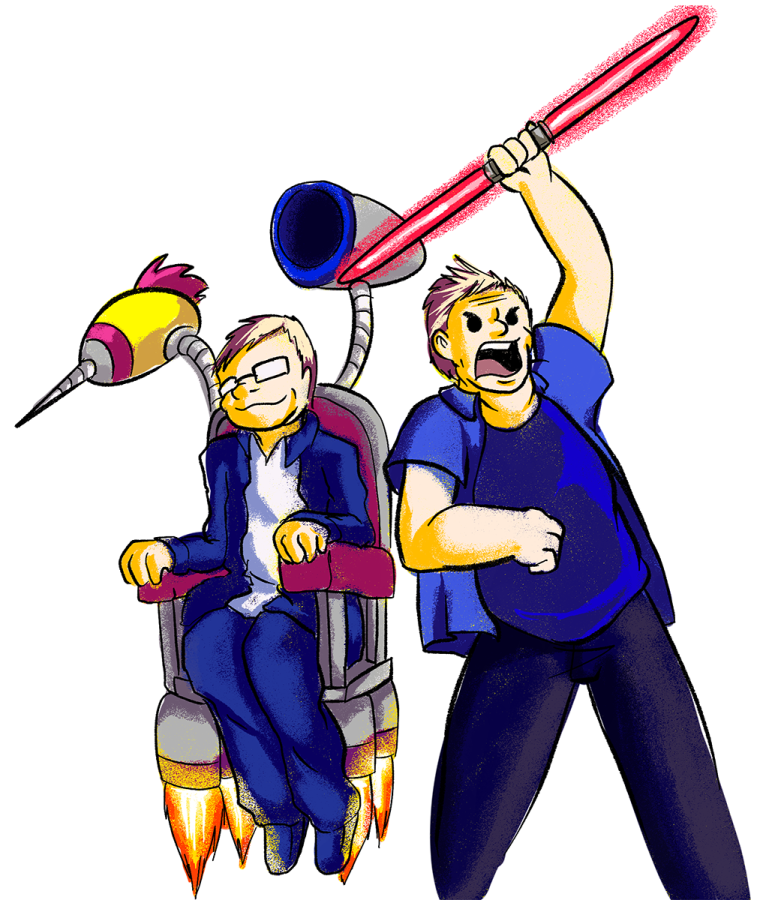 Darkness washed down upon the London streets like rain –– it was also raining, too, if that was unclear. I mean it was London, it rains all the time there. No wonder the Brits colonized half the world. I would want to get away, too.

But it was also dark, probably because of the location of the sun or something sciencey like that. But science meant little to our heroes as they “accidentally” met under a Soho underpass just as the clock struck midnight. “Dong… Dong…” went the clock 10 or 1 times –– I can’t remember. And one could barely hear the sound of the wheels of an automatic wheelchair wheeling like a spinning wheel on the pavement, but I assure you, the sound existed.

Existing, and also waiting at the same time, was a slightly chubby and older version of a hero to many.

“Too many annoying people. Would they just leave me alone!” muttered the man with the slight pudge in his belly, breaking the third wall.

The man was Mark Hamill. He had gotten in a car crash on his way to speak at a comic convention about Star Wars VII. In other words, his land speeder had broken down, and his robot pal was nowhere in sight to fix it… yet. He ha.

“Who are you talking to?” echoed a deep voice beneath an underpass about 50 meters in front of Hamill, “and why are you out here in the rain all alone?”

“Ben?” muttered Hamill, ironically. He knew Alec Guinness’ ghost didn’t hang out in Soho. Hamill began to make out an outline of an automatic wheelchair and could hear its wheels wheeling away. A shiver ran down Hamill’s spine.

“Are you a member of Les Assassins en Fauteuils Roulants? I know how dangerous you are, but I’m dangerous too!” he said.

“No, I’m not a member of the wheelchair assassins, Mark Hamill,” boomed the voice again as it slowly made its way toward Hamill. “I’m not even Canadian! I’m English.”

“But… But… You’re dead… And your voice sounds American,” breathed Hamill breathlessly.

“I’m not you, Reeves, you wanker! It’s me, Stephen Hawking.”

Hamill took a step back as Hawking emerged from the darkness and into the dim light of a street lamp.

“Stephen Hawking. But you don’t have a large booming voice,” he said.

“Indeed, I don’t. That’s my assistant Craig. He does all my voices for me, so I don’t have to sound like a robot.” An anonymous figure emerged from behind Hawking and waved. “We’re connected telepathically, you see, a device of my own invention. I’m the brain, and Craig is the voice and the brawn. But I’m in need of a new assistant now. I had Craig cut the brakes of your car, and we estimated you would crash around here. Let me cut to the chase. Craig here is getting married, and I need a assistant. I’ve seen your work on Batman the Animated series, and of course everyone knows Luke Skywalker’s skill with a lightsaber.”

“…is that sex joke?” interjected Hamill.

“You’re accusing me of having a sense of humor –– come on, good lad. I just crashed your car in attempt to recruit you. The world needs saving my friend. Look around. Global Warming.The Islamic State. Putin. I feel as if our combined brain and manpower could finally bring these crises to end and finally define whether the Islamic State is ISIS or ISIL.”

Hamill began to think. His career had become a bit spaced out lately.