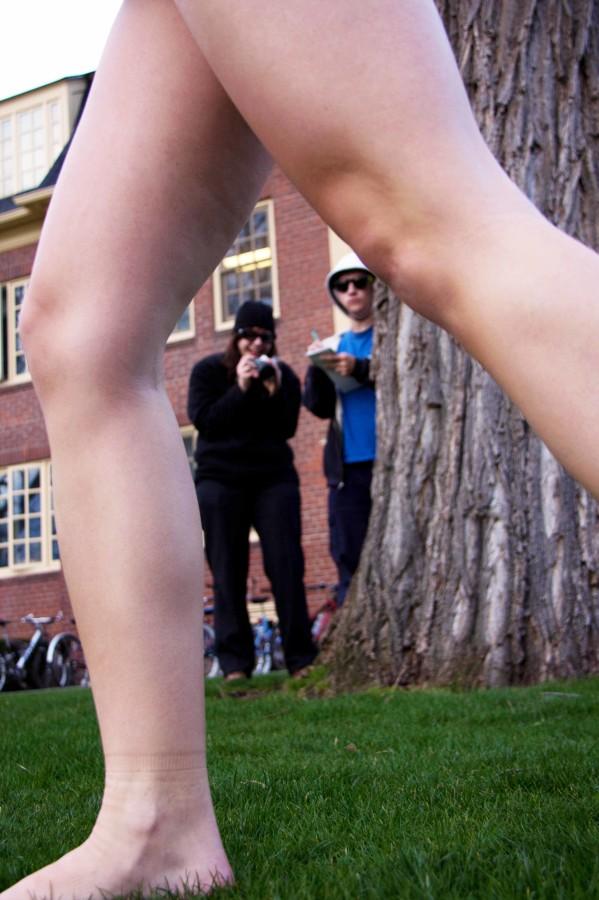 If you’ve ever found yourself curious about Beer Mile, but didn’t want to run it, there’s a new option in store. Last Thursday, Whitman College administrators announced the purchase of 10 ViewFinder viewing stations, common at zoos and natural attractions, for the annual pre-finals nudist event.

Beer Mile viewing stations will be set up on the roofs of Maxey West, Jewett Hall and Penrose Library. The viewing stations, which cost 2,500 dollars apiece, are being paid for by the Student Affairs Office and ASWC’s Student Travel and Development Fund.

Beer Mile, for first-years and those ignorant people who don’t know what it is, involves drunken laps around Ankeny Field at midnight on the Tuesday before finals, hours after the last classes finish.

“This is a Whitman tradition,” said Dean of Student Affairs Alan Kohal. “But we recognize that some people are self-conscious about their body, curious about other bodies, or just want to enjoy the experience fully clothed and sober.”

Some students felt that the rooftop viewing experience would provide a nice contrast to their experience running Beer Mile.

“I ran it last year and it was pretty awesome, but I sort of want to see what it looks like as a spectator,” said sophomore Jeremy Jones.

“I want to see lots of boobies,” he said.

Not everyone will use the viewing stations, though. Sophomore Mike Hancock said that he planned to watch from inside the library.

“I don’t know why the school needs to spend so much money on this when they’re raising tuition and class sizes,” he said. “I plan to watch from the Allen Reading Room in the library, and I have my own pair of 40-dollar binoculars. This is such a waste.”

ASWC, which is paying 15,000 of the total 25,000-dollar cost, justified the expense by saying that it was responding to student requests.

“Students have been asking for this for years,” said ASWC Vice President Percy Vertz. “It was either this or send some kids to Glenn Beck’s Rally to Maintain Insanity, and this serves the whole Whitman community.”

Not everyone thinks it is appropriate to view Beer Mile, though. Senior Anita Manshire, president of Feminists Empowering, Changing and Leading (FECAL), said that the viewing stations were a perverted and misogynistic way for men to treat women as sexual objects.

“We are not sexual objects for men to view from the roofs of buildings and I encourage all women to boycott Beer Mile this year,” she said. When asked if she would use the viewing stations she replied, “I might, just to make sure it doesn’t get out of line. Plus, I might see some cute freshmen boys.”

But, as Professor of Anthropology Josh Long points out, the viewing stations are more of a way to bring the community together than a sexual perversion. He said he plans to attend Beer Mile for the first time this year because he finally got tenure, but said the fact that it is now more of a community spectacle made him interested, too.

“Before, Beer Mile was just a bunch of drunk people running around naked,” he said. “But with an audience, it becomes a spectacle, a community tradition. That visual experience is really important : something like the Olympics or, yes, the Beer Mile right here at Whitman isn’t a spectacle without the audience.”