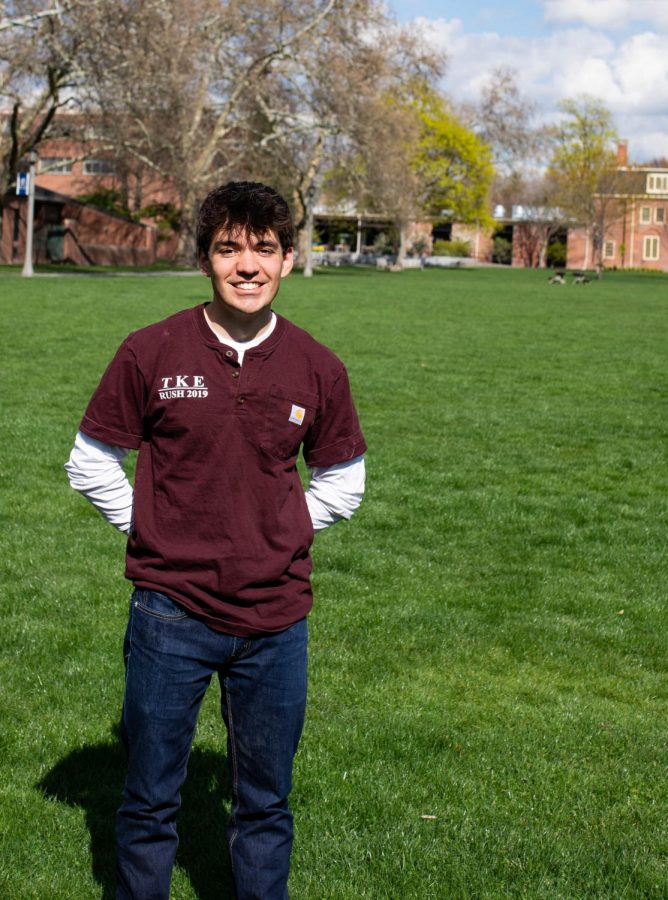 Seniors Evangelos Sarantinos and Cameron Conner have been awarded the Thomas J. Watson Fellowship: a one-year grant of $30,000 that supports 12 months of independent travel.

According to Keith Raether, the director of the Office of Fellowships and Grants, “the aim of the Watson is to give new graduates of unusual promise a full year of exploration and discovery anywhere but home.” He adds that fellows often have obsessive interests, independent investigative drives and a healthy dose of courage.

For both Evangelos and Cameron, the Watson Fellowship means getting a year to explore their specific interests in a global context. The fellows have planned detailed itineraries that outline all of the materials, lodging, travel and deadlines necessary to complete their projects.

The Watson Fellowship was something Sarantinos had long held an interest in applying to. Since his first year, Sarantinos has been researching about and looking into what past fellows have done.

“It is a really cool opportunity to be able to travel for a year and pursue a passion of any sort,” he said.

In deciding what he would like to pursue, Sarantinos chose rare disease caregiving practices due to a personal connection – his younger brother has a rare disease. Sarantinos started researching the topic and planning a blueprint the summer after his junior year.

Sarantinos will be spending his Watson year in England, Spain, Malaysia and Australia.

“Through extensive research, I chose these places because they are operating at the cutting edge of rare disease management and caregiving,” Sarantinos said.

According to Sarantinos, some countries around the world are able to provide a greater extent of caregiving than others or have different means of responding to rare diseases in their community.

After researching the different approaches that countries utilize to respond to rare diseases, as well as researching community events, he chose his four countries due to their unique approaches. Through talking with families, doctors, research labs and independent and non-profit organizations, he was able to find out more about local initiatives and plan his itinerary.

Sarantinos is especially interested in how these organizations are able to obtain the resources necessary for rare disease caregiving.

By speaking with families, physicians, doctors and caregivers, he hopes to see how different communities are caring for individuals with rare diseases. In doing so, he hopes to improve his own caregiving practices.

For Conner, understanding community and the maintenance of common wealth has occupied his mind since he was a small child. He has read many books about it, and in his time at Whitman, he has taken classes on the subject.

With his parents, he founded the Conscious Connection Foundation, whose aim, as stated on its website, is to create resilient communities in Nepal by empowering women through education and healthcare. Through their work in the foundation and their company “Ganesh Himal Trading,” they are able to relate business to community wealth building, redefining the meaning of “business as usual.”

Conner planned his Watson year as a way to make sense of the contradictions between Nepal and the United States, which have very different geopolitical positions and ideas about how public resources and environments should be maintained.

Based on his research, Conner plans to visit Peru, Spain, England and Mongolia, all of which have a particular model and context of community wealth building. He made the decision to travel to only these four countries so that he could spend more time in each place and connect more intimately with each community. In Spain, Conner also plans to take language classes to supplement his time there.

In each of these four places, Conner will explore their different models of community building to learn how communities ensure that the needs of all members are met. This includes how environments are cared for, how resources are distributed and how a community reacts to crisis collectively.

“These communities are not utopias. Like my own, they are complex societies made of unique and multifaceted individuals,” Conner said.

While taking this into account, he believes that questions can still be asked about what forms of governance can benefit the most people in a community. He asks, “How do methods of community governance intersect with patterns of liberation and oppression?”

Conner’s goals for his trip are to learn more about community wealth building in different countries and to contextualize some of these ideas in the United States.

Peru’s Sacred Valley, where Conner will begin his journey, is the home of the Quechua people. These people have stewarded one of the most bio-diverse ecosystems on the planet while living in harmony with it for millennia. Here he will work with the Association ANDES, an indigenous rights organization, in order to learn from these communities about their principle of Ayllu.

Connor said that according to the co-founder and director of the organization, Alejandro Argumedo, Allyu is a system in which “individuals with the same interests and objectives [are] linked through shared norms and principles with respect to humans, animals, rocks, mountains, lakes, rivers, pastures, food crops, etc.”

Argumedo credits this system for preserving social and ecological dynamics in the region, saying that, “this system has allowed the inhabitants of the Sacred Valley to develop interdependent relationships between one another and their surroundings that embody the ideals of community wealth.”

Following Peru, Conner will travel to Spain, where he will investigate tensions between community and independence. In Spain, he will travel first to Mondragón, a small town in the Gipuzkoa province and home to the central facilities of the Mondragón Corporation, one of the world’s largest worker cooperatives. Here he hopes to learn more about cooperative management at Mondragón University and explore the tensions of a community-oriented corporation that exists within an aspiring separatist state.

Conner will then travel to the city of Preston in Lancashire, England, to study its recovery after the 2008 financial crisis which involved community, corporate and public interests.

Finally, he will travel to Mongolia to learn about the ownership and management of pastoral grasslands.

“In each location, I will attempt to better understand what ‘common wealth’ and ‘community wealth’ mean to the people who are experiencing them on a daily basis,” Conner said.