Across the world and back again: Students return to Whitman 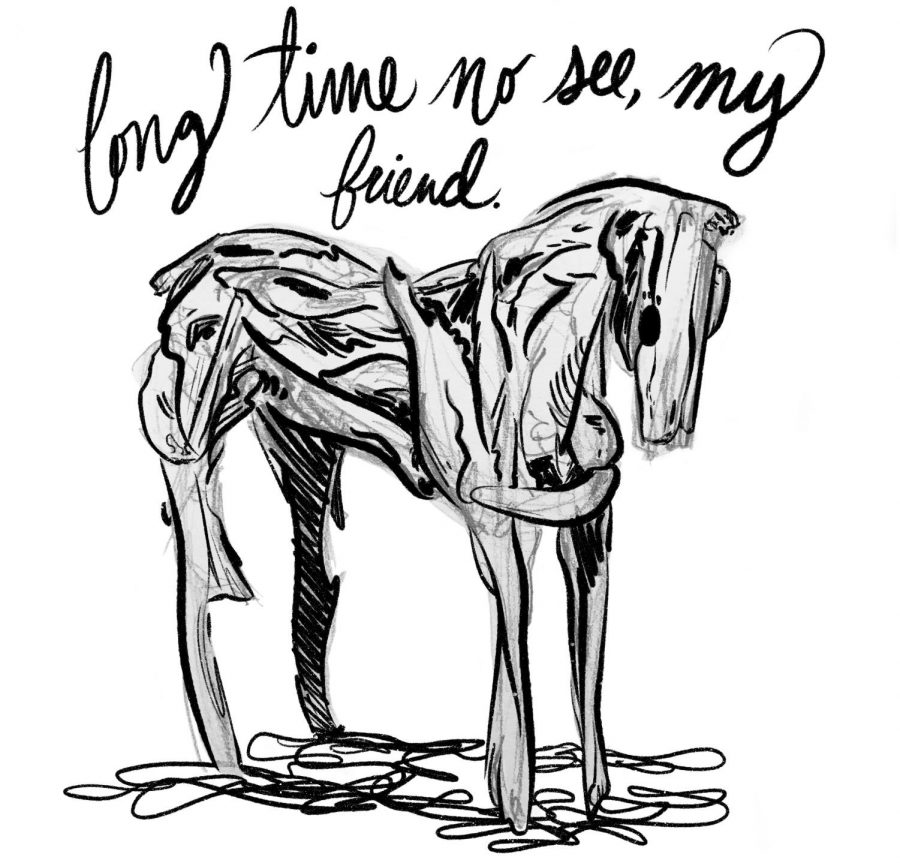 The start of a new semester brings the return of Whitman faces both new and old, from places near and far. This spring, many students are returning from time away and abroad. As they transition back to campus life, their stories and experiences offer insight and guidance into the tedious work of adjustment and growth.

To facilitate a smooth transition back onto campus, the Off-Campus Studies (OCS) Office provides opportunities, such as the Welcome Back Dinner, for students to come together, chat and learn about methods to navigate the transition back to campus. For students returning from leave of absences, reentry into the Whitman community can look different as there are less students in the same position.

Discomfort of transitions
With the return to campus come challenges and discomfort which differ for each individual student. For sophomore Michela Herbert, who took a leave of absence following her first semester at Whitman, the adjustment back to Whitman has been positive, yet far from simple.

“It’s a transition and I think transitions are always hard. It’s taken some adjustment and will continue I’m sure,” Herbert said. “I think college is hard and weird and presents its own limits to live within but it is very structured and living outside of that for a while gave me a lot of room to grow and create my own life.” 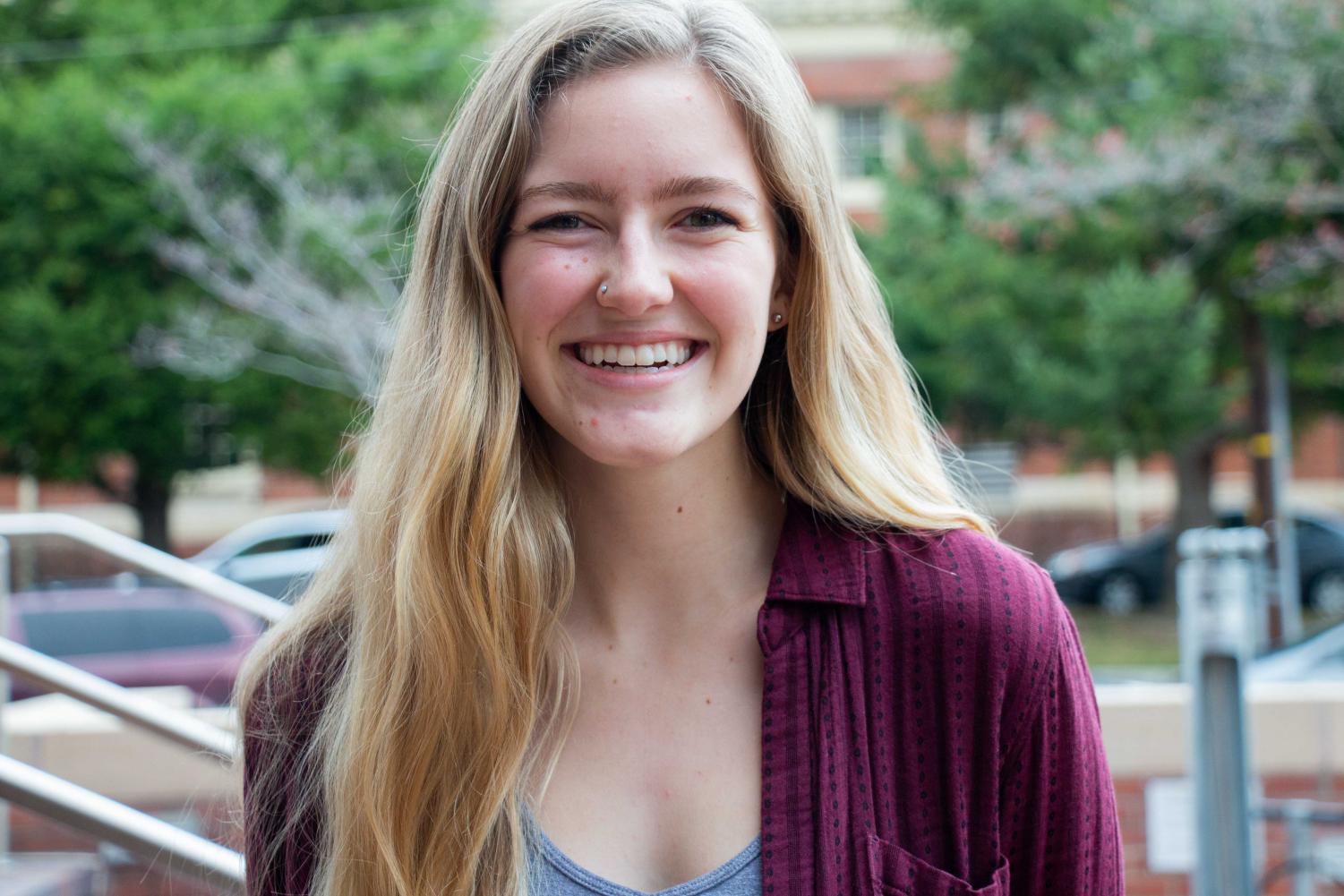 Sophomore Michela Herbert is adjusting to life back at Whitman after returning from taking a leave of absence. Photos by Dana Kendrick

“In my year at home I took classes, worked and had internships and hung out with friends and spent a lot of time at home and really put myself first and got to a place where I feel really grounded and capable and confident and I was ready to try again,” she added.

Whitman is the second school Herbert has attended. The first was right after high school in New York. Her experience with transitions taught her to prioritize herself in moments of hardship.

“I didn’t make it through the first semester, so I took a semester off and then I came here. Everything started happening again: I would have anxiety and depression and it was manageable but I could feel myself deteriorating and I wasn’t willing to put school ahead of that. I knew I couldn’t get to the point I was in New York,” Herbert said. “ It was a hard decision because I was at a spot where I probably could continue and suffer through it and then I had this moment of like…I’m just not willing to suffer.”

Herbert spent her year away living at home, working and attending community college. The time off created space for self-care, growth and independence. While leaving campus creates opportunities for recovery and healing, the process of returning remains difficult. Herbert is currently navigating the complexity of reintegrating into campus life with cautious optimism.

“I think it’s all about finding balance and realizing it’s a different experience now,” Herbert said. “It’s hard at this point to separate the discomfort of a transition from the pain that I felt that in the past and having a lot of those same emotions come up and knowing it’s hard now and hopefully it does not continue to get worse like it has in the past.”

Difficulty with transitions is also part of the experience for students returning from time abroad, according to Off-Campus Studies Associate Director Barbara Hoffman.

“We often get to know ourselves best when we are put into a different location and then when we come back to the old one we might feel a little uncomfortable,” Hoffman said.

The process plays out differently for every student. Hoffman described some students who slip easily back into their campus world, whereas others went abroad and had epiphanies that altered their academic, social or career trajectories.

Junior Joseph Christensen, who spent the past fall semester in Nantes, France, noted that one challenge for juniors who studied abroad in the fall is settling into the new lifestyle of off-campus housing.

For Christensen, a politics and French double major, time abroad has led him to reevaluate his academic path.

“I feel a little less confident in my majors and a little more questioning what path I want to take, thinking a little bit beyond Whitman now because the first two years are very Whitman-focused and now I’m thinking how do my majors relate to my career. What is my career? Will I even have one?” Christensen said. 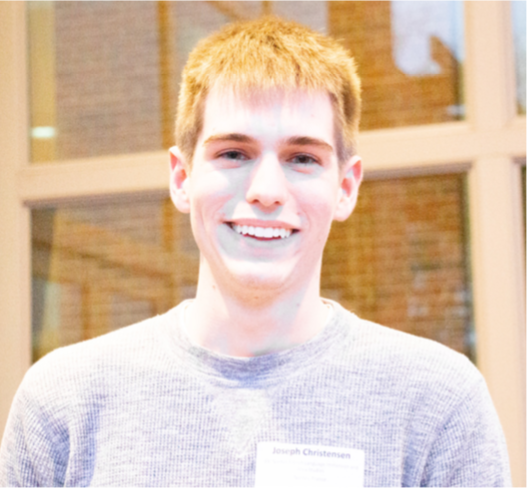 Junior Joseph Christensen is adjusting to life back at Whitman after returning from abroad. Photos by Dana Kendrick

In addition to adjusting to new living situations and insights on academic paths, Christensen noted that the transition back into an old environment can also be strange.

“Whitman stays largely the same, there’s not a lot of change, and so coming back I felt like I had done it all before. It kind of felt like I wasn’t really moving anymore,” Christensen said.

The sense of an unchanging campus is echoed by senior Jessica Luong, who studied in Durban, South Africa, and has had a year to reflect on her transition back to campus. She recalled being shocked at how Whitman had remained the same as when she had left it. Similar to Christensen, it was the return to Whitman’s campus, not the U.S, that ushered in shock.

“I didn’t really feel like ‘abroad changed me’ until I came back to Whitman. Whitman really is a bubble,” Luong said. “Coming back from abroad was kind of like going home after the first semester of college – everything is familiar, but your mom (your friends) looks at you weird because you’re pale and you had a bunch of new experiences without her.”

Christensen and Luong agree that the new, formative experiences they had abroad felt at odds with a campus that feels stagnant and removed from the realities of life around the world.

“Something that I still struggle with is the lack of awareness that Whitman students have for things happening outside of Whitman and outside of America,” Luong said. “I was a part of the vast majority of students that was content with ignoring what was happening in the world (and of course sometimes keeping up with the news can be challenging and mentally draining), but since coming back from abroad, I now know how important it is to have a basic understanding of what is going on in order to be a decent citizen of the world.”

Hoffman noted that unless students check in with the Off-Campus Studies department or attend the available returning programs, she doesn’t always know how every student is doing. With that being said, there are patterns and shared experiences with study abroad returners.

“I do think some students have legitimate homesickness for the country they were in,” Hoffman said. “They miss the pastries in France or Denmark or they miss their homestay family in Bali. They really do feel homesick for the different life they had then.”

Along with potential homesickness, students often find their study abroad experiences are too extensive to distill into conversational snippets and students can struggle to express their feelings upon return. The OCS office encourages students to volunteer with the Off Campus Studies Fair and to incorporate their experience into forums such as the Whitman Undergraduate Conference.

“Another thing that I notice with a lot of students is that they do feel like they’d like to talk more about their experience abroad and they’re aren’t that many people who want to listen,” Hoffman said. “People come back from an entire semester or year abroad and their friends will go ‘Hey how was your trip’ and the student has a whole bunch of things to say but they don’t know where to start.”

While for many returning students there can be a hesitation to overshare their experiences, Luong encourages sharing as much as possible.

“Talk about your experience as much as you want even if it annoys the heck out of all your friends who didn’t get to go abroad. Don’t let them make you feel bad about not being at Whitman,” Luong said. “Even if you feel like you missed a lot while you were away, Whitman has probably not changed much and you’ll have lots of time to make more memories.”

The diverse array of experiences returning students bring back to campus are united in the deepening gratitude they bring to these students. Time away from campus allows students to recognize and appreciate new facets of themselves and their surroundings. Whether taking time off or studying abroad, students bring distinct learning and appreciation back to campus upon their return.

“I think you can be out of your comfort zone in all kinds of places, and when students come back they notice things about U.S. culture, about their privilege in the world, even students who maybe don’t see themselves as having a lot of privilege at Whitman often come back having a realization about the privilege that is part of being in a place like Whitman or even being able to study in the US,” Hoffman said.

Experiencing the daily difficulties and challenges of studying in new linguistic and cultural context, many students returning from abroad also seem to gain an appreciation for international students at Whitman.

“When students come back, especially those who are US citizens, I think they come back with a new appreciation, and perhaps awe, for the international students at Whitman,” Hoffman said. “That is a good moment, to see wow, we have a set of students here who are already studying abroad for four years.”

While exploring and studying abroad or taking a leave of absence are both experiences that can give new perspectives and opportunities for growth, Herbert expressed that returning to academics is a refreshing aspect of her return.

“I have a new appreciation for the academics. It’s nice being able to take more specialized class and have professors who are so interested and students who really just want to show up and learn and I appreciate that a lot more,” Herbert said. “I have loved the education Whitman has given me so far.”

Herbert described that along with positive academic experiences, she is appreciative of the community she is returning to.

“You have community built around you,” Herbert said. “ I think that was hard being at home. I was lucky to find community in my work environment but otherwise there aren’t a lot of young people just hanging around all in one spot. It feels really nice to come in and be surrounded by potential friendships.”

“Taking time off is one of the best things I could have possibly done for myself. I’m so hopeful and I am excited for the next semester and hopefully the next two years,” Herbert said. “Let’s say it doesn’t work out, I just feel so grateful to have gone through everything I have gone through because of the woman I am today, feeling strong and having a strong sense of self and knowing how to take care of myself.”