Yeehaw Aloha: Cowboys, Hula and a Good Cause 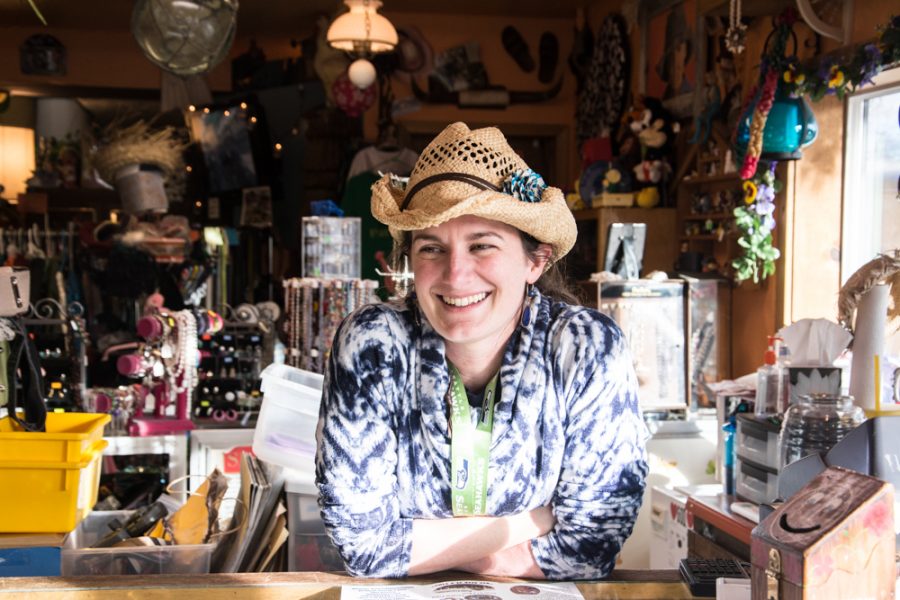 Drive down Isaacs Avenue and the eccentric appearance of one of the funkiest thrift stores in Walla Walla will probably catch your eye.

It’s a barn-shaped building with a pastel blue truck parked outside and chairs, tables and shopping carts of bright items humorously piled around the entrance. Yeehaw Aloha exudes personality.

Written at the top of the arched roof in typographic letters is the singular word “WOAH,” a word that can’t help but be used to describe the passion and generosity of its owners Laurel and Gabriel DeLong.

The vivacious thrift store, Yeehaw Aloha, was opened in 2013 by Laurel and Gabriel DeLong.

While Gabriel was born and raised in Walla Walla, Laurel moved to Walla Walla from Portland to help start a new church now called Crazy Love Church. What she thought would be a short stay soon became her new home, where she would meet her husband Gabriel.

After meeting in Walla Walla, an absurd dream launched Laurel and Gabriel on their journey towards opening a store. The dream was about the daughter of Laurel’s boss at the time. In the dream, her husband owned a restaurant with the name “Country Aloha.” Upon seeing the girl the next day, Laurel recounted the dream.

“She’s like ‘oh thats hilarious!’ She’s a stay at home mom, never thought about opening a restaurant and she says ‘that sounds like Yeehaw Aloha!’ Ok…whatever that is,” said Laurel.

“I came home, told my husband this interaction and then he’s like ‘I love that name. Lets check out the dot com! If it’s available, I’m buying it,’” she added.

While the Yeehaw Aloha domain name sat unused and lacking a purpose except for bearing Laurel’s dreamed up business name, the DeLongs worked passionately to provide opportunities for the youth in Walla Walla and at Lincoln High School, Walla Walla’s only alternative high school.

“I think it would be easier to, or just as easy to, open a store and not have to move stuff all around, inside, outside, all around for yard sales,” said Laurel.  “And to fundraise for year round funding for the youth in Walla Walla so we could do activities weekly.”

With all of the benefits of having a permanent location to fundraise, the DeLongs opened Yeehaw Aloha in 2013. The store was first located near Phoumy Thai on Isaacs Avenue.

The dreamed up name largely influenced the store, from its decor to customers’ perceptions of the store.

“It wasn’t planned out at all, but it just had a good ring to it and people liked the sound of it,” said Laurel. “And we just try to decorate the store so that it looks like that to keep it kind of a fun destination, not just a boring thrift store, but a little bit more artistic and playful.”

Opening a new business was a learning curve that came with many challenges. Neither Laurel nor Gabriel had a formal business education, although Laurel’s background in fashion merchandising and apparel design gave her insight into the aesthetic aspects of the business.

For the first six months of business, Gabriel manned the store for the majority of the time while Laurel continued to work her full time job, helping out during her lunch breaks and on Saturdays. The store was open only three days a week and items were individually priced as they were bought.

Along the way, as they learned business skills and how to meet state standards, Yeehaw Aloha became a full time job (and more) for both Laurel and Gabriel.

“That’s just a whole other learning process. Not only meeting the state standards, but all the forms and insurance. Just a lot of paperwork,” said Laurel. “Even though we’re only open four days a week, doesn’t mean we’re not working the other days.”

While the DeLongs business has grown enormously since their days of garage sales, they have many goals of what they hope to achieve in the future. Some of these goals include: having more management employees, opening a larger youth center or new locations of the store specifically for clothes and books that are completely run by youth and raising $120,000 dollars for Walla Walla youth.

Laurel mentioned that raising $120,000 for activities for youth is very important to her. Although Yeehaw Aloha makes more than that in the store every year, a lot of that money goes towards heating and lighting costs. The DeLong’s rely on monthly donations to fund youth activities.

Laurel also said that she wishes that she and Gabriel weren’t limited to having trips for students when they have holiday breaks from school. Especially having the store open on Saturdays  limits the trips they can lead to just weekends, she said. However, Laurel is hopeful that they’ll be able to have more volunteers trained to cover more Saturdays so that the kids can take weekend trips.

Laurel and Gabriel have always had one mission for their business: to provide resources for the youth of Walla Walla.

Having been involved in Young Life, a Christian youth group organization at Lincoln High School, for 8 years, the couple decided that with the revenue of a business they could work towards opening a youth center for all Walla Walla  youth.

This youth center, which is planned to open next fall in the space above Yeehaw Aloha, will have a recording center, a stage, gaming area, computers and a study area. The space for the youth center is 1,600 square feet above the store. The space has already been plumbed, however some cosmetic retouching is needed before the youth center can open.

The DeLongs’ hope is to provide youth and teens in Walla Walla with opportunities that might not be available at school or home. These opportunities range from camping and fishing to learning job skills.

“It would be where people go out and take trips from and know what is available for them in this town because as the town has grown, there’s a lot of adult activities, but not for the teens,” said Laurel.

“So just having more options that are safe for kids and just to be encouraging them in the future and what maybe could blossom into their careers or hobbies,” she added. “You know going camping and fishing you know just being able to cherish the natural surroundings we have and explore.”

For many teens in Walla Walla, experiences such as camping and enjoying nature is something many do not have easy access to. Through the future youth center and Young Life, many students are able to have experiences they would not have had otherwise.

“So it’s just even getting a couple hours away is something that they’ve never done, so we use this as a mouthpiece to let this need be known and fund students being able to be employed here and get job skills,” she added. “And then we can raise money to go on trips they want to go on and try to pull those together.”

While there is still work to be done to open the new youth center, Laurel and Gabriel passionately work everyday to make this supportive environment available for local youth. Laurel emphasized that volunteers are greatly appreciated to make their goals possible.

For Laurel, Yeehaw Aloha is a testament to the unexpectedness of life and the importance of community. Through her work as a businesswoman, she has gained countless connections to community members and experienced the kindness of Walla Walla.

“I’ve met so many wonderful customer-friends, my store friends and regulars,” said Laurel. “I mean I have not only people who come in once a week, but people who come in everyday like the paperboy or gals who need to get out of the house, who getting stir crazy, with their kids or special needs adults or something like that.”

“We have a lot of cool friendships in this town that I never would have considered would be my favorite part, or that that would be ahead of me of having so many friends in town.”

The friends and community members that the DeLongs have come to know have been greatly important to the success of their goals and providing experiences for youth.

“I just think this town just loves to be generous and give and support activities like this,” said Laurel.

These connections with customers and a dedication to the community allows small business owners to be backbones and advocates for the community, said Laurel.

“That’s another thing never before opening our own store was I so passionate about, so I’m really passionate about shopping local,” said Laurel. “Small businessmen and women are like the people with a lot of heart and pulse on the town and the relationships too are treasured that you can really see people investing in this town who care about the people in this town.”

“I want to be known as somebody who just invested in this town because it was the people who are worthwhile,” she said.