Straight Cookin’ in the Back: A Peek into Bon Appétit Prep

Behind the scenes, with Bon Appetit. 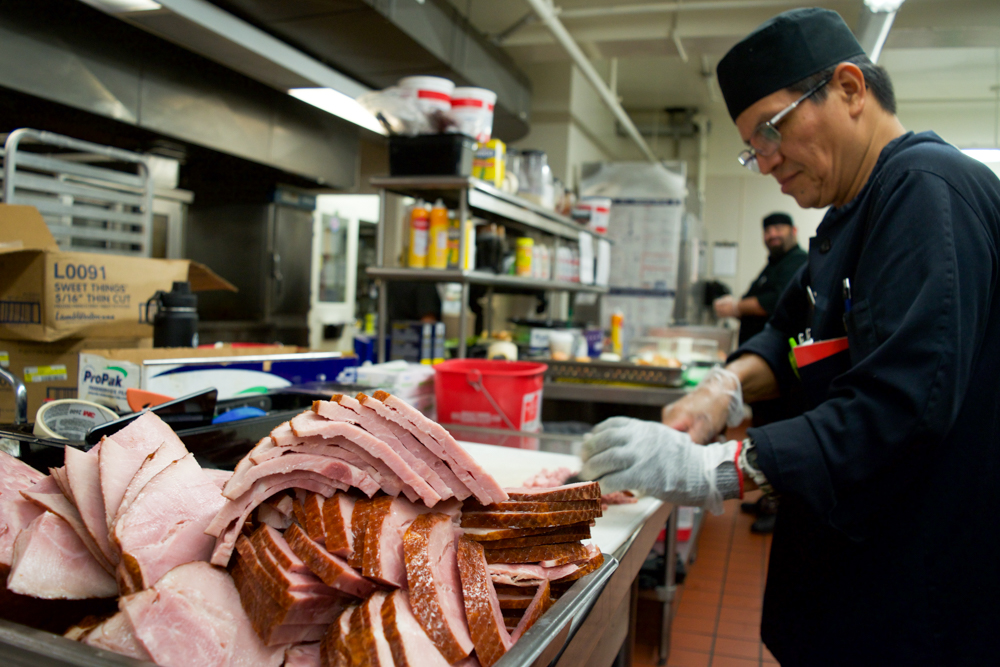 Salad, sandwiches and tlayuda for this Thursday lunch at the Prentiss dining hall.

Students flurried across the dining hall floor during the high noon chaos, scattered about the various lines.

“Hey!” said Josh Hulett, the Bon Appetit Assistant Manager who was working the salad line, flashing a smile at an unsure student contemplating various salad options. “What would you like? Is it a salad type of day?”

Hulett said that he often looks for students walking back and forth with a frown on their face and tries to engage them.

Every other day, I’m the one pacing by the food, examining my options.

But today, I was standing with Hulett on the other side of the chaos as I crossed spheres from dining hall to kitchen.

My new shoe covers — slip resistant of course — marked my assimilation into the kitchen staff. Hulett said that they have a major emphasis on safety in the kitchen. All of the staff — apart from the students who get the shoe covers — get $50 to buy special shoes with tread on them for work.

“Corner!” Hulett said as we strutted into the kitchen past a corner, emphasizing his point.

“Corner!” and “Behind!” are two designated safety words, which, along with trash talk, comprise part of the daily vocabulary in the workplace. They are shouted so that everyone is aware of where each other is when dealing with potentially dangerous tools of the trade.

The kitchen housed the offices of chefs, servers and dishwashers.

Each chef had their own space to work on a long metal table, and each was meticulously helping to put together a meal for the masses, cutting up carrots and potatoes and throwing them in pots, compiling foods in their own little unconventional cubicles. Each one was doing their part to add to the meal as a whole.

The staff doesn’t work the traditional nine-to-five shift. Roger Edens, the Bon Appetit Manager, said that the morning shift, which including the bakers and breakfast staff, work from 4 a.m. to 2 p.m. The night crew comes in at 11 a.m. to start prepping for dinner.

Hulett and I settled behind our desk: the usual exhibition cooking space turned salad bar for this particular lunch.

“Stephan! How are you, sir?” Hulett said with a smile as a student walked up to the salad bar.

After helping Stephan decide his salad choice by letting him know the most popular options of the day and serving it to him, Hulett turned to me and said that Stephan is a freshman and had just turned in his application the day before.

Bon Appetit is always looking for student servers. Hulett mentioned that basically if you have all the paperwork in, you have the job. And sometimes that job means only working for 2.5 hours once a week. They are extremely flexible.

The set-up appeals to many students, even those who have graduated. One, student who graduated last year and works in Walla Walla, asked if he could pick up a few shifts on the side. Even an RD requested to pick up some shifts for fun, and a recent Whitman grad currently washes dishes in Jewett. Edens said that they typically have about 40 student workers and 100 regular staff.

One of Bon App’s current student servers is Declan.

Hullett told him that I was in the kitchen working on an article for The Wire.

“Oh, I hate it here so much,” Declan said, with a big sarcastic smile on his face.

Sarcasm and trash talk swirled around the kitchen just as much as the food itself.

“We try to have fun whenever possible,” Hulett explained.

Hulett said that they even try to make safety meetings fun, complete with root beer floats and the like.

Hulett said that he thought he would be sad to see summer go, but when he was back, he was actually really happy to be back and see familiar faces.

According to Hulett, interacting with students is really important to most people at Bon Appetit, even if some of these students support a rival football team.

When a student with a Patriots jersey walked up to the salad bar, Hulett served up a plate of salad and trash talk.

“Good choice,” Hulett said of the student’s salad pick. “Even for a Patriot’s fan.”

“Restaurants have regulars,” Hullett said. “But we have breakfast, lunch and dinner, seven days a week. We really have regulars.”

Hulett mentioned that he sees students through their ups and downs; they wear it on their faces.

That’s why it’s important to Hulett to try to alleviate some of that stress through fun activities such as supporting goofy section dinner themes, and putting together the finals feast and closing dessert every semester.

But he said that the Bon Appetit staff also takes the serious stuff very seriously.

Hulett said that during orientation week and the first few weeks of school, his job is dedicated to allergies.

While students can be shy about talking about their allergies, Hullett emphasized that he always tries to be a friendly face, and he encourages open communication.

While Bon Appetit collaborates a lot with Residence Life about allergies, Hulett said that it is always nice to have a face to face conversation about the specifics.

The staff is really open to suggestions, according to Hulett. He even said that a student came up to him with a strong dislike for fish, which Bon App tried to accommodate.

Hullett introduced me to Jim Cooley, the head chef who makes the menus among other responsibilities.

Along with a good sense of humor, Cooley values good, quality food.

Cooley said that everything in the kitchen is made from scratch. Nothing is out of a box. He also said that Bon App buys locally and humanely.

Cooley and Hulett both said that Bon App really cares about waste reduction. They try to track how much food students usually get and at what times of day as well as what they like.

“If there are tatertots in any line, you can bet that people will go in that line, simply for the tatertots,” Hulett said.

A daily part of the job is trying not to make too much food. But when they do, they give leftover food to the local Walla Walla Senior Center, “Center at the Park,” as part of a food recovery program. So far this semester, Bon App has donated nearly 400 items of food to them. “Center at the Park” also works as a hub for other similar centers who feed the community; if they cannot use the food, they make sure that it is utilized by another local organization.

As for the menu, Cooley said that he likes to mix it up and stay on top of trends. He looks up a lot of recipes online and likes to try new things, although it can be difficult to do that when translating family size recipes to college sized servings.

At the same time, Cooley’s cooks are empowered to cook what they want, such as their grandma’s lasagna, which Cooley says keeps them happy and proud of what they’re creating.

“Trying to guess right, make the food that people want to eat,” Cooley said. “Our job, here on campus, is to make people happy.”

Around 1 p.m., the students dispersed, which was the staff’s cue to do the same.

Staff went to clean the tables, food stations and kitchenware, setting the stage for dinner in three hours.

I went to where all the dishes were being washed and said goodbye and thank you to Hulett, who gave me a soapy knuckle in response.

I slipped off my shoe covers and exited the Prentiss Dining Hall just like every other day, and was back surrounded by students on campus, a Whitman student once again.