Waste at Whitman: Online Shopping on the Rise 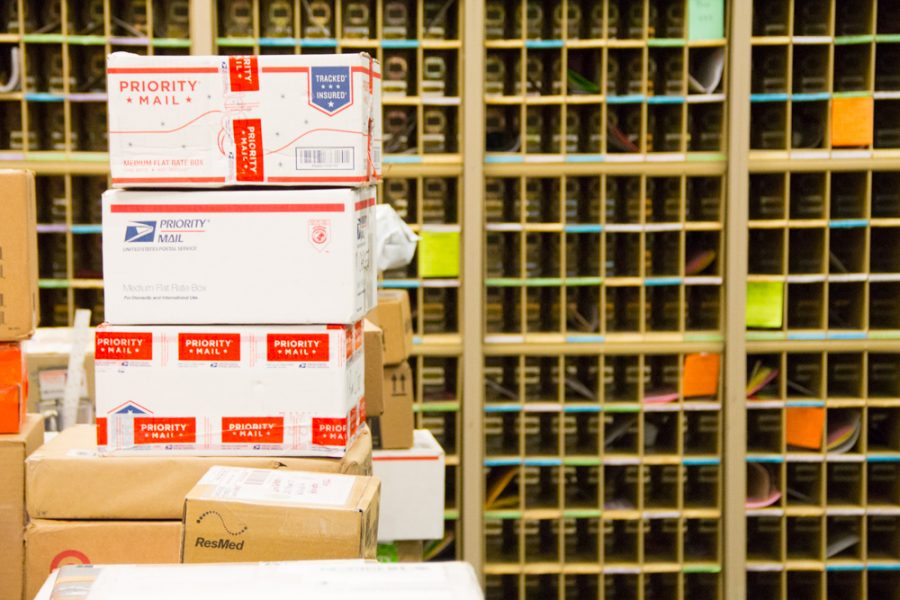 Last year the New York Times published an article entitled “E-commerce: convenience built of a mountain of cardboard.” The article looks at online shopping in what many imagine is its most extreme form: a Silicon valley worker orders produce through Google and receives his cardboard box of onions and potatoes within hours, Amazon delivers a Miami resident his order of a four-pack of Starbucks vanilla frappuccinos in 10 minutes flat (their fastest delivery to date), a proliferation of shopping and delivery services promise to drop off your goods within hours of ordering.

You might think that Whitman and Walla Walla, tucked away in folds of rolling hills, hours from the nearest major city and well outside of Amazon’s two-hour delivery window (for now), is worlds away from this strange and bewilderingly fast incarnation of e-commerce. While online shopping may look different here than in, say, San Francisco, it’s worth taking a closer look at.

Talk to Eddie DeLeon, the supervisor of the Whitman post office.

On an average day, the post office, located in the basement of Reid Campus Center, receives 250-300 packages. The current student body of Whitman, including full and part-time enrolled students and excluding those studying abroad totals 1430. Including 120 (full time) faculty, that makes nearly 1600 people who use the post office. Working from the low end of the number of packages received, that’s roughly one package for every six people per day.

Whitman certainly isn’t unique in this. Universities and colleges across the country, such as Bowdoin and University of Connecticut, have noticed a drastic increase in mail volume to due students’ online shopping habits. Amazon Prime, with its discounted student rate and domination of the online shopping market (in 2016 Amazon accounted for 43% of all US online retail sales), is often pointed to as a particular culprit.

Interestingly, DeLeon has noticed that this school year in particular has seen an abnormally large amount of packages.

“The mail volume was just ridiculous this year; it just flooded in,” DeLeon said.

The volume was particularly high at the beginning of the school year–which DeLeon explains happens every year–and after the flood, caused by a burst pipe, in Reid this past January.

“The beginning of the year is just the busiest time for us. We get probably over 400-500 packages a day from new students coming in–just trying to process that and to keep the mail flowing and make sure everybody gets their stuff on time,” DeLeon said.

The flood in Reid began on a Wednesday, shutting down the post office until two days later, a Friday. When the post office received the mail from the past two days on Friday, they faced their own flood–of hundreds of packages and a line of students eager to pick them up. The postal workers struggled to process and hand out the huge amount of mail.

“I felt like I was being a jerk because … it was after the flood and everyone wanted their box, and … 600 and some packages came in at once on a Friday,” DeLeon said. “And that was like, ‘Oh, well, time to get to it and see what we can do!’”

DeLeon isn’t sure why this year in particular has seen such an increase in packages.

“I don’t know if more students went online and bought most of their books online,” DeLeon said. “Everybody likes to order online.”

DeLeon acknowledges that as a small town, Walla Walla does not have many stores that carry brands students want for shoes or other clothing items. He wonders if the former Blue Mountain Mall on Rose Street, Myra Road and Poplar Street, slated to reopen in spring 2018 according to the Union-Bulletin, will attract students and thus reduce online shopping.

For his part, DeLeon appreciates that the many packages create a bustling, fast-paced work day for him and his coworkers.

“It’s great because it keeps us busy. It keeps the flow of the mail room really busy,” DeLeon said.

Having just completed his first year as supervisor of the post office (formerly he was the campus courier), DeLeon feels it has been an exciting time to be in his position.

DeLeon and his employees juggle not only the front desk where students, faculty and Walla Walla residents send mail, pick up packages and buy stamps, but also the near constant influx of packages at the back door, brought by a myriad of delivery services, from UPS and FedEx.

“There’s nothing better than getting a package to a student and them going, ‘Oh my god, this is what I wanted so badly, thank you!’” DeLeon said. “It’s like Christmas every day down here, like you’re giving a gift away and that’s what’s cool about it … it’s  what we offer for everybody, but for students mainly.”

Groups on campus, including the Sustainability Office, CCC, and Divest, are, however, concerned about the problem of wastefulness and consumerism that online shopping contributes to.

A Culture of Consumption

The high volume of packages ordered online by students and faculty becomes more meaningful when set in the context of larger patterns of waste and consumption at Whitman and nationally.

Environmental concerns surrounding online shopping include rising emissions due to increasingly personalized transportation services and increasing production of cardboard used for packaging. According to a 2016 NYT article, 35.4 million tons of containerboard were produced in in the United States in 2014, with e-commerce companies among the fastest-growing users.

One recent study in Newark, Delaware found that a rise in online shopping in recent years by local residents corresponded to more trucks on the road, an increase in greenhouse emissions and greater traffic congestion.

As for Whitman, several groups on campus are working to draw attention to/address issues of waste. Last week’s Mt. Trashmore event, in which a week’s worth of campus waste (3600 pounds) was displayed on the Cordiner side lawn, was intended to draw attention to that issue.

Sophomore Genean Wrisley, who helped coordinate the event as part of her position as Student Coordinator for the Sustainability Office, explained that over 70 percent of the waste’s contents were recyclable. That said, Wrisley stresses that with all the energy that goes into recycling in the form of transportation and processing, reducing consumption should be the main focus of those who wish to live more sustainably.

“The idea of Mt. Trashmore is to first reduce, then reuse, and recycling is the last resort. It shouldn’t be the first,” Wrisley said.

In terms of online shopping, Wrisley expressed her frustration over the social pressure to continually buy new clothing in order to look a certain way.

“You constantly have to buy new clothes in order to not even be cool, but just to not be considered weird,” Wrisley said.

Those social pressures and frequent consumption are in turn driven by our capitalistic economy.

“When money drives our economy, you have to have people consuming in order to make that work, which means that people have to hopefully donate, but generally throw out old clothes and buy new ones,” Wrisley said.

Sophomore Joe Jolley, who helped put on the Mt. Trashmore event, lives in the Environmental Interest House. Each weekend he and the other seven members of the house sort through the recycling from the residence halls in order to send it out. Jolley has noticed that packaging from online orders seems to make up a significant portion of students’ recycled waste.

“Large quantities of Amazon packages and bubble wrap are an extremely ubiquitous sight when we make our rounds,” Jolley wrote in an email to The Wire. “I know it’s just anecdotal, but seeing all those boxes each week is certainly something that has made me consider my own consumptive practices.”

In addition to the immense amounts of packaging and increased transportation that come along with online shopping, Wrisley points out the difficulty of finding affordable clothing made in a sustainable way.

“I just think clothes in general are really frustrating to me because I try to buy sustainable clothes, but those are all really expensive generally,” Wrisley said. “So trying to find some kind of balance where you could have sustainably made clothes at a reasonable price for people who care [is important], because obviously shopping at Walmart or Target, they’re using materials and transportation and all of that that uses immense amounts of fossil fuels.”

How might students begin to make their habits less wasteful? In addition to thinking twice before making a purchase, Wrisley urges us to be more thoughtful in what we throw out.

“There are people, even at Whitman, who are struggling to make ends meet. And so I think before you look at the garbage, look at other places you can put things that you don’t want anymore,” Wrisley said.

Along with several other members of the ASWC Sustainability Committee and with Sustainability Coordinator Brandon Bishop as an Advisor, Junior Ryan Garrett has spent this year writing a Zero Waste Plan for Whitman. The 18 page document, which will be presented before the ASWC Senate in about a week, offers guidance for how Whitman can divert 90 percent of its waste (we currently divert 47.4 percent) from landfills by 2030.

According to Garrett the issue of waste, while important, is too often overlooked.

Some of these negative consequences include the production of toxic pollutants that seep from rotting waste and the formation of byproducts that contribute to acid rain and air pollution. All of these effects damage nearby ecosystems, harming vegetal, animal and human lives.

Considering that Whitman sends about a ton and a half of waste directly to a landfill every month (though that is steadily increasing to two tons each month), the college certainly makes a sizable contribution to waste production.

Distributed among Whitman’s student body, that averages out to about 201 pounds of waste per student per year.

Portland State University, for instance, produces twenty pounds of waste per student per year, while at Evergreen State that number is around 50 pounds.

The Zero Waste Plan asserts that “the College has failed to properly handle and reduce its waste output.” The plan seeks to hold Whitman accountable to its ‘commitment to sustainability’ that makes up part of the college’s values.

A particular point of emphasis is that while 52 percent of Whitman’s waste that ends up in a landfill, over 50 percent is recyclable. Garrett explains that while those recyclable materials are composed of a number of different things, the main contributions include cardboard and paper products and food.

Clearer, consistent labelling of recycling bins could go a long way toward remedying the problem with cardboard, much of which comes from packages from online shopping orders.

“It’s very easy for people to throw their cardboard into the landfill stuff. And so, a ton of stuff that should be recycled is not being recycled because of just purely not clearly labelling containers or not having a uniform container,” Garrett said. “That’s another thing we’re pushing–to get uniform containers so everybody knows what they’re doing.”

In addressing the rumor that some of Whitman’s recycling is sent to China (and possibly burned), Garrett emphasizes that no matter the veracity of that, it shouldn’t shift any responsibility off of Whitman for more responsibly handling its waste.
“It doesn’t have to be China for us shipping our waste somewhere to be an issue. I think it’s well within Whitman’s means to kind of be able to handle the waste here if they really wanted to get behind it,” Garrett said.