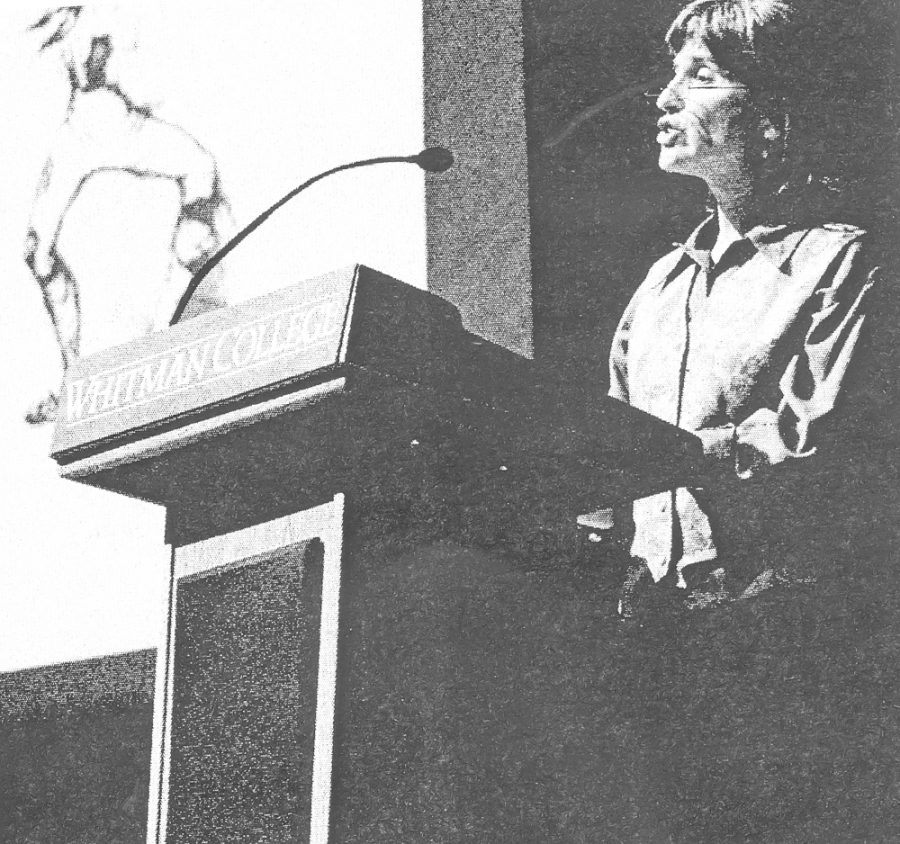 Today  marks the fifth annual Power and Privilege Symposium, a day in which members of the Whitman community will gather to attend sessions led by students, faculty and community members on the themes of justice, diversity and inclusion.

Symposiums of all sorts are nothing new to Whitman. Throughout the college’s history, students and faculty have organized gatherings to discuss a variety of academic, political and ecological topics. In 1988, for example, Whitman hosted a “Symposium of National Defense Waste;” in 1990, a “Future of the Northwest Forests Symposium;” and in 1996, a “Symposium on Nonviolence, Civil Disobedience.”

But none of these are quite like the annual Power & Privilege Symposium, which, since its inception in 2013, has focused on the themes of power, privilege, diversity and justice through student and faculty-led panels and workshops.

Senior Jess Faunt, the Executive Director of this year’s Symposium, noted that this year’s gathering is particularly special. Because the current format of the symposium began in 2013, 2017 is the first year that every traditional, four year student will have had the option of attending the symposium throughout their entire Whitman experience.

Race and diversity: the spark 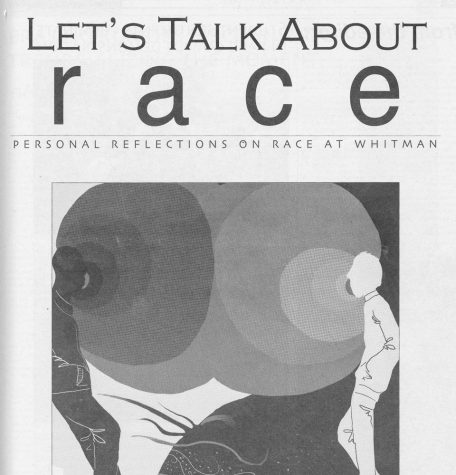 This year marks the fifth annual Power & Privilege Symposium, but to understand how it came into being, it’s necessary to visit a prior iteration of the symposium that first took place in 2006.

In the midst of international conflicts dealing with issues of race, religion and power, including the Iraqi-American war, in early October 2006 two Whitman students caused an outcry on campus for attending a Sigma Chi party in blackface.

The students said they were dressing up as characters from the TV Show Survivor, which received criticism early on in the 2006 season for dividing up the cast based on race.

In response to the incident, faculty and students came together to hold what would become Whitman’s first ever “Symposium on Race Relations and Community.”

The event was originally envisioned as a ‘teach-in’ to be held for four hours in the evening and led in large part by faculty with the aim of educating the Whitman community about race through scientific, historical and cultural perspectives.

However, in meetings held with faculty, staff and concerned students, the students unanimously requested to postpone the symposium to allow them time to play a more active role in helping design aspects of the event and in mobilizing the students addressed on campus. The widespread show of student concern led faculty and staff to cancel classes the day of the symposium to allow greater participation.

What was originally planned to be a four hour long event was extended to an all day affair kicked off by a 10 a.m. plenary lecture led by five professors and followed by the testimonials of six students’ sharing personal experiences with race.

Among other presentations, Professor of Biology Delbert Hutchinson spoke about misconceptions regarding the biological differences among races. Professors Nina Lerman and Duke Richey presented on historical trends of visual stereotypes of race in U.S. popular culture, including minstrel shows and the use of blackface.

While the symposium was not repeated in 2007, in January 2008, a “Symposium on Diversity and Community: Unfolding Identities” was held. Race, diversity and justice were again prominent themes.

Throughout the symposium’s five years, Director of Student Activities Leann Adams has witnessed firsthand and contributed to students’ efforts in developing and building upon each event.

The 2013-style symposium emerged from the initiative of then Vice President of ASWC, Marcial Diaz-Mejia ‘13. Diaz and a team of students worked to put together a symposium modeled after the format of the Race Symposium of 2006 but with a few key differences. The 2013 one did not have cancellation of class with a full day of workshops, but rather kicked off the event with an evening keynote speech followed by two to three days of evening workshops.

According to Adams, students who worked on the 2013 symposium were “really invested in bringing back this idea of a campus wide engagement in the topic of privilege and discrimination and diversity and the really complex dynamics that exist on our campus that maybe weren’t on the forefront of conversations for a lot of years.”

Working with the students that first year was an exciting experience for Adams. While the emphasis of each symposium shifts slightly from year to year, the spirit of engagement that inspired the first symposium continues to thrive.

“I think at its core the symposium has held fast to the identity of being an event that attempts to deepen conversation for whatever level people are at, to provide space for that conversation to become deeper. To be more engaged. To be more thoughtful, more critical, those kinds of things,” Adams said. “And I think that identity was true at the beginning, and I think it’s true still now.”

Following the 2013 Symposium, ASWC lobbied the faculty to approve the cancellation of classes for the following year around the same time to hold a day long symposium. By giving students a day off from classes, the symposium became more accessible to all members of the community.

Every symposium since 2013 has gradually shifted away from its roots in ASWC Executive Council to more of an independent organization. With that, Adams, who as the ASWC advisor meets weekly with Executive Council members, has increasingly played less of a role in putting together the symposium.

Symposium directors now work more closely with the assistant director of student activities, who was Katharine Curles up until this semester when Evan Griffis took over.

However, Adams explains the student activities office still provides a lot of support, from primary advising to leadership development, programming and contract support. But the Symposium really has become its own entity.

“And the day of we just sit back and watch this beautiful event happen,” Adams said.

Angela Tang ‘17, executive director of the 2015 Symposium, worked on the programming committee of the 2013 Symposium as a first year student.

After experiencing the hectic schedule required to build the symposium from the ground up in in 2013, Tang decided to apply for the position of executive director the following year in order to work toward a more sustainable symposium.

Tang focused on internal and external structural improvements, from creating a more suitable staff structure to working closely with presenters to improve the quality of the workshops.

Tang locates the Symposium’s staying power in its origins as a student-founded project.

“This is something that stemmed from students, particularly students from marginalized groups, and I think that there’s a lot of power to say that this project which is now led by whoever it is that feels like they should and can lead it is stemmed by a need from marginalized communities,” Tang said.

As for their involvement this year, Tang is co-hosting two workshops with guest facilitators and taking part in a panel led by Brenna Two Bears called “Millennials creating change.”

Tang hopes to see the increasing sustainability of the symposium and its growth into whatever it needs to be.

“I think it’s going to continue advocating for a lot of the same issues, and at the same time I also hope that it has the room to become what it needs to be for students here who feel the need for the symposium, or feel the need to use the symposium in a way to speak about their truths. I hope it still continues to be here and for it to continue being adaptable and what the student body wants it to be,” Tang said.

Empowerment: Symposium now and beyond

Under the banner of “empower,” Executive Director of this year’s Symposium, senior Jess Faunt, and her team of four directors seek to continue the work of past symposiums.

Faunt explained that she owes a lot to infrastructure built up by the symposium’s previous four directors.

“There definitely is a consistency to the symposium that makes it really beneficial for the people stepping into the roles and…we have fewer challenges than the people who built this from the ground up,” Faunt said.

While this year’s symposium will in many ways be similar to the ones in the past several years, Faunt and the team of five programming directors are instituting a few tweaks to the structure that could make a big difference.

For one, they are adding a fifth session block from 4:00 p.m. to 5:00 p.m. The extra session was added in response to a large number of applicants and to concerns about crowded rooms and presenters not having time to attend friends’ sessions.

This year’s Symposium will also offer spaces in the GAC for self-care for those who wish to take a break but still stay engaged with other students.

Furthermore, the directors are introducing something called “self-led caucuses,” which are informal conversations students can sign up to lead during lunch the day of the Symposium. Faunt and director Alondra Contreras-Cervantes ‘17 learned about at a national conference on race they attended last November.

“[The caucuses are] just opening space for people who didn’t lead a session but want to continue the conversation in a different capacity,” Faunt said.

And that really is the point of the Symposium– to continue conversation beyond the day and beyond the formal event itself.

Kazi Joshua, Whitman’s dean for intercultural affairs and chief diversity officer, emphasized the need to bring the lessons learned from the Symposium to all the spaces each of us inhabit on campus.
“Setting aside a day in which we can engage in conversations about community, about inclusion, about social justice, and about change is very, very important. But we should see that simply as a kind of launching pad of conversations that go on throughout the year, in a variety of settings,” Joshua said. “Let’s see the symposium not as an end in itself but as a kind of launching pad into 365 days of a conversation about justice and inclusion.”