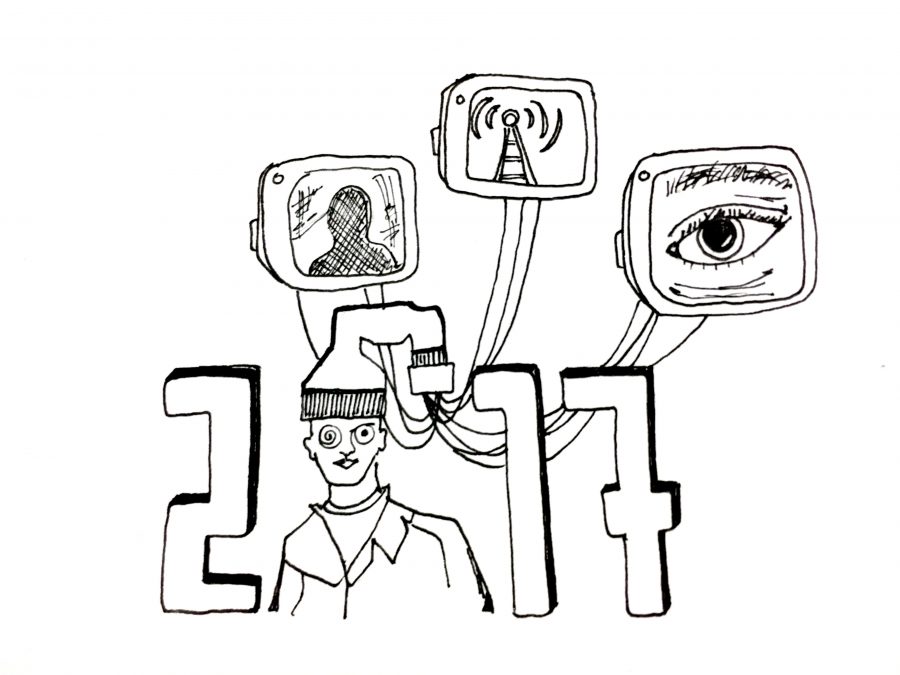 In the weeks since the inauguration of President Trump, a lot has happened. With so much change, grappling with the events unfolding under the Trump administration is challenging. From the disciplines of the Humanities, Social Sciences and Natural Sciences, three professors use their expertise to explore the complexities of ‘alternative facts,’ the ‘Muslim Travel Ban’ and the revival of the Dakota Access Pipeline.

Searching for answers in the classics

When Whitman Professor of Sociology Alvaro Santana-Acuña heard about the 9,500 percent increase in sales of George Orwell’s “1984” in the days following Trump’s January 20th inauguration, his interest peaked.

According to Santana-Acuña, who studies how works of literature attain the status of “classic,” one reason so many rushed to buy Orwell’s dystopian novel is that classics help us grapple with our lived experience.

“We go back to the classic in order to find something that helps us make sense of what’s going on,” Santana-Acuña said. “There are questions and answers in ‘1984’ to questions that we’re trying to find an answer to right now, especially after the inauguration of President Donald Trump.”

Does Santana-Acuña think the comparisons between “1984” and the events in recent weeks are apt?

“I think they are certainly parallels between the book and the current situation, but at the same time, it’s a fictional book, right?” Santana-Acuña said. “So then the point is, how are people actually using fiction to make sense of a real situation?”

Central concerns pertain to what many see as a presidential administration seeking to concentrate state power.

Santana-Acuña points to Kellyanne Conway’s use of the phrase ‘alternative facts,’ a term Conway used to defend the erroneous claims made by Trump’s Press Secretary Sean Spicer regarding the size of the crowd at Trump’s inauguration.

“[One issue is] the rise of an authoritarian state, the fact that the state is going to provide you with the ‘facts,’ that you need to believe not the facts of real life, but rather the facts that the party or the state provides you with,” Santana-Acuña said.

Conway’s phrase has since been compared to the “1984” term “newspeak,” a fictional language instilled to eliminate personal thought, and “doublethink,” the state of holding and accepting two contradictory beliefs simultaneously

Santana-Acuña explains that while a majority of the people who bought the book in the recent surge have not read and likely will not read it, that doesn’t prevent them from talking about “1984” to voice their opinions and concerns.

“Not reading is not necessarily something that deprives you from talking about the book,” Santana-Acuña said.

Thanks to articles in the “New Yorker,” the “Guardian” and other media outlets that refer to terms from the novel, like ‘newspeak,’ ‘thought police’ and ‘ministry of truth,’ even those who have not read “1984” have access to the meaning behind certain elements of the novel.

“So even if you haven’t read ‘1984,’ you read these [articles] and then you get a sense of what the book is about, and then you can engage in a conversation with other people about whether this current administration is going to be something similar to ‘1984,’” Santana-Acuña said.

In fact, Santana-Acuña explains, that is an integral part of what makes classics, classic.

“Classics are books that we may have not read, but we know details about them,” Santana-Acuña said. “Non-reading is a social practice that can contribute to make more visible certain cultural objects.”

Santana-Acuña is quick to mention, however, that many believe other pieces of literature outside of “1984” could be more useful in grappling with American politics at the moment.

Huxley’s “Brave New World,” Atwood’s “The Handmaid’s Tale,” “The Children of Men” by P.D. James and Yevgeny Zamyatin’s “We” are just a few such pieces.

While non-reading contributes to the renewal of classics, reading the stories that have not achieved “1984”-level popularity can open up a whole new field within which to search for inspiration and possible solutions.

You can read an article Santana-Acuña recently published about the rise in sales of “1984” at booksandideas.net.

For Religion Professor Courtney Fitzsimmons, her class this semester entitled “Evil and Suffering” has felt a little too real in light of the inauguration of Donald Trump.

Fitzsimmons, who specializes in Judaism and religious ethics, focuses much of her research on structural evil and how we can approach the injustices that it produces as moral problems. Structural evil encompasses any structural inequality, from racism to homophobia.

Inspiration for Fitzsimmons’ research comes from the work of Iris Murdoch, an Irish philosopher who believes that good must be defined externally from humans. Fitzsimmons also studies why and how people ignore structural evil, examining historical instances, such as the holocaust, and examples that extend into the present, such as white privilege.

In applying these ideas to current events, Fitzsimmons studies Trump’s actions through legal, ethical and moral codes. She emphasized that one must look objectively at the legal and ethical implications of Trump’s actions but also consider what to each person’s moral compass affects what each person considers “right.”

“It is first of all important to distinguish between what is normal politically and what is not normal,” Fitzsimmons said.

According to Fitzsimmons, Trump’s Executive Order aimed at beginning the repeal of the Affordable Healthcare Act can be viewed as a normal action that any Republican president might take. One may have moral objections to this executive order, but the standard of political norms offers a starting point for navigating such decisions. However, the Muslim Travel Ban, Fitzsimmons says, should not be considered normal.

“Having a ban discriminate against certain religions, certain parts of the world–that’s what we’ve called not normal,” Fitzsimmons said.

Recent controversial actions taken by Trump, including the travel ban, the executive order designed to fulfill the promise of a wall along the Mexico-U.S. border and the advancement of the Keystone XL and Dakota Access pipelines have been met with world-wide responses from protests to legal objections. Some have said the Muslim Travel Ban is a direct violation of the Protocol on the Status of Refugees treaty that was put into place in 1968 and many lawyers have been working to prove the illegal nature of this executive order.

Entrenched in our nation is not only a legal law against the Muslim travel ban, but also a sense of moral obligation to welcoming refugees coming from areas of violence. Professor Fitzsimmons explained how the horrific violence of the Holocaust has been ingrained in the minds of our nation through the presence of the Holocaust in our education and media. According to Fitzsimmons, the United States feels a moral sense of guilt for the denial of German Jewish refugees and seeks to stop the repeat of this moral downfall.

“The omnipresence of that historical time period in the American moral imagination, that constant awareness that there was this time where there was this great moral failing, I think that in part is why you see such a dramatic response to what’s going on right now,” Fitzsimmons said.

In social and news media, connections between Hitler and Trump have often been drawn. However, Fitzsimmons expresses skepticism in jumping to such conclusions.

Although the likelihood of America becoming a nation comparable to Nazi Germany is not high, Fitzsimmons warns that certain trends in Trump’s administration should worry us.

“The constant theme in the administration of challenging the press, threatening to not be transparent with the press anymore–that should scare us. That should terrify us,” Fitzsimmons said.

Fitzsimmons leaves the Whitman community with a message of hope. In the face of national events which have both legal and moral implications, Whitman students have something to bring to the table: their passion and voice.

“If this is sincerely something that we really care about, finding ways in which we can get involved are actually not really hard,” Fitzsimmons said. “You guys don’t have any money to donate, but you have time and you have energy and you have smarts, like you guys are all smart people. We don’t need any more money; we need smart people.”

Standing Up for Science

For Biochemistry Professor and Bangladeshi immigrant Dalia Rokhsana, the profound impact science has on the lives of everyone is invaluable. However, within the Trump administration she sees an upsetting disregard towards science.

From the advancement of the Dakota Access and Keystone Pipelines to the attempt to defund of NASA’s earth science program and other scientific organizations and the dismantling rules pertaining to coal mining near streams, Professor Rokhsana explained that Trump’s recent actions send the message that he does not value science. Rokhsana emphasized that this devaluing of science creates a disconnect between the scientific community and the public. This in turn makes it difficult to cultivate an informed citizenry.

“If the scientific community is not providing us with what they are finding, there is a big communication gap. And that is a big problem,” Rokhsana said.

Professor Rokhsana emphasized the importance of science in our society and the many benefits we gain from science.

“We are benefitting every single day from medicines, and electronics and computers. Everything is the product of scientific studies, and [Trump] doesn’t believe in science,” Rokhsana said.

Rokhsana described the variation in origin of the scientists she met on a research trip in Germany. This is an illustration of the way science can bring together people from many different backgrounds. For many immigrant scientists, like Rokhsana, coming to the United States for study or work opens a door to new opportunities. Collaboration among scientists across the globe is a common occurrence and fosters innovation.

“It’s like a melting pot. Where people come together and work,” Rokhsana said.

Due to the collaborative nature and large number of immigrant scientists, the Muslim Travel Ban has had a large impact on the scientific community. According to Rokhsana, who is a Muslim immigrant, many universities and companies employ scientists from all over the world, including the banned countries. The travel ban could greatly hinder the ability of these scientists to travel to collaborate with one another.

In order to combat the media’s distorted portrayal of scientific facts, a group of over 80 Whitman professors from different disciplines formed a group called the Whitman Action Collective, which aims to provide the Whitman and Walla Walla community with reliable information in the areas of science and politics. Overwhelmed by the swell of information coming from all sides, the professors see their group as way to use their specific expertise to make a meaningful, decisive contribution to the community. Rokhsana explains that reflecting on how specific groups can best contribute is a good strategy for dealing with what can feeling like an overwhelming political situation.

“Communities have to compartmentalize a little bit. This is what I can contribute and then trying to learn about other things,” she said.

Along with the work of Whitman professors, Rokhsana sees the large representation of Walla Walla at protests such as the Women’s March and the airport rally as a sign of hope.

“There are so many people coming out and really being active. That’s something that I haven’t seen before–that active engagement in politics,” Rokhsana said.

Rokhsana emphasized the importance of supporting those who are strongly affected by Trump’s actions.

“Some people say ‘I don’t feel it. This isn’t affecting me.’ But those who it is effecting, they are the ones who are suffering the most,” Rokhsana said.

Above all, Professor Rokhsana reminds us that science has made an invaluable impact on all of our lives.

“We need to push for science and make people aware that you are living, and breathing and benefitting from science. We cannot neglect scientific fact,” Rokhsana said. “Even if you are not a scientist, you can still advocate for science.”