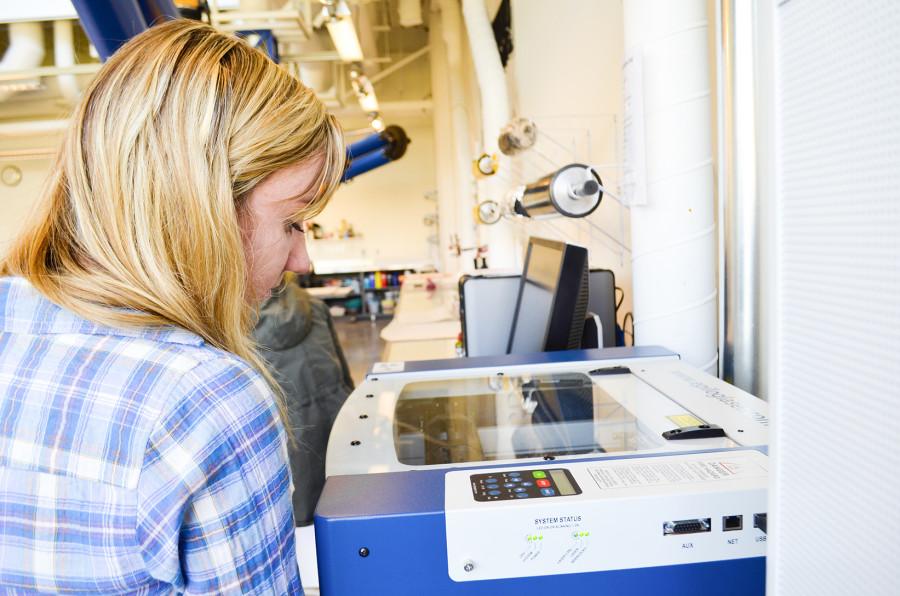 Though it looks like a box and is equivalent in size to perhaps the crate of a large Beagle, it is much more sophisticated than a home for a dog. It has a clear lid and, inside, a grid that looks somewhat like a cookie cooling-rack.

To those not trained in the arts of Photoshop and the latest technology crazes in the art world, the new laser cutter that lives in the printmaking room of the Fouts Center for the Visual Arts is merely an unintelligible object. Yet to students who attended visiting artist Lari Gibbons’ workshop last weekend, it is a marvelous tool for creating art more efficiently and effectively.

The laser cutter is just one of the new tools available to students in the Art Building. The Art Department also recently acquired a 3D printer and CNC router. New technologies are available all over campus, however, as tools to enhance both the research of professors and the experience of Whitman students.

Assistant Professor of Art Justin Lincoln deeply involves technology as a medium in his own artwork and in the material that he teaches in his classes. He is deeply versed in the theories surrounding technology and cites Marshall McLewin as a particularly profound media theorist from the 1950s and ’60s.

“Anything that extends the abilities of our bodies is a technology … any tool is a technology in the sense of we’ve introduced a kind of mediation,” said Lincoln, quoting McLewin.

Lincoln explains that there are two ways of viewing technology. The first is called technological determinism, in which technology controls everything and is thought of as either the best or the worst thing that has happened to man.

The second viewpoint is called technological neutrality. Those with this view don’t believe technology is inherently positive or negative, but the way in which people use the technology is.

Lincoln in not satisfied with these simplified explanations.

“I don’t agree with either … Technology is neither good, nor bad, nor is it neutral. We need to think of it creatively and critically … We should try to balance our critical views of it with technology’s creative possibilities,” he said.

There are many creative ways to apply technology as a tool. Technologies are being used across disciplines on the Whitman campus, both as tools in professors’ research and as aids for enhancing undergraduate learning.

Oftentimes student use of advanced research technologies occurs during student-professor collaboration projects, such as that of Associate Professor of Psychology Matthew Prull.

“This summer I had [my student assistants] learn how to use [Qualtrics] and then put the survey together,” said Prull.

Qualtrics is a software that can be utilized for survey data collection. Prull just started using it in his research this summer. Previously he used a similar software called PsyScope, which he learned about 20 years ago.

Chronoscopes were very expensive and very few researchers were able to use them. Today, however, technologies are more accessible. PsyScope is free, and Whitman has a Qualtrics site license that is shared across departments.

Benjamin H. Brown Professor of Physics Mark Beck, who was recently selected to be tenure-track, uses less accessible technologies in his research. Along with a team of physicists in Hanford, Wash. at the LIGO Hanford Observatory, he is trying to prove a part of Einstein’s theory of relativity by measuring gravity waves as they reflect off of a special mirror built expressly for that purpose.

“Conceptually, how it can be understood is that a black hole is a heavy ball on top of a sheet of black rubber or something,” said Beck. “Everything else on the sheet is in the field of gravity of the sun. When the sun wobbles or anything, the field of gravity wobbles too. The waves that come because of the gravitational connection is what we are trying to measure.”

“The mirrors are built from sheets of infinitely thin slices of material being layered on top of each other,” said Beck.

Right now he is researching the effect of certain temperatures on certain materials in order to better understand how to build the mirrors most effectively. This is where students can come in.

“This summer I had a couple students researching for me. They used computer modeling programs to find approximations of what we can expect to find in the real experiment,” said Beck. “What the computer tells us tells us what to look for.”

Beck says that this student-led work is a priority for him as a professor.

“I really want to work with students. That’s the reason I looked for positions at small liberal arts schools, and that’s partly how I sold myself to Whitman, by saying that I wanted to involve students in my research process as much as possible.” he said.

Beck said that now that he is tenure-track, Whitman provides him with a start-up grant to pay for the materials and technologies he needs to conduct his research. Next summer, instead of just modeling the experiment on a computer, students will be able to run experiments with lasers and mirrors. This is very exciting, Beck says, as he believes that LIGO (Laser Interferometer Gravitational Wave), the group he works with in Hanford, is about one or two years away from making a breakthrough in this important project.

He explained that physicists have been waiting for the culmination of this project since the 1980s. At that time, it was impossible to observe the minute waves caused by the gravitational pull of black holes. As every other part of Einstein’s relativity theory was proved correct, the science world was forced to take this part as true as well.

However, a group of forward-thinking young physicists realized that in about 20 years, the technology might be sophisticated enough to see and measure the waves, and so they formed LIGO to anticipate the benefits the new technologies could potentially allow. The main observatory is in Hanford.

“Students should watch for big, exciting news coming from Hanford in the next couple years,” said Beck. “Right in our own backyard!”

Technology As A Tool

As Prull also pointed out, Beck sees technology not as the source of the research, but merely a method of getting to the heart of the matter. Lincoln likens fluency in new technologies to a “toolkit.”

“Students … have to always be playing with tools in the toolkit again and again, and the tools could be techniques,” said Lincoln.

Within the context of making art, Lincoln posits that consistent use of tools means constant creation, not just working towards a finished artwork for a critique or a deadline. It means becoming accustomed to the “tools” already in your possession and building new tools. For instance, a screen-printer has the tool of knowing how to use the technology of screens to print an image on paper, but over time he can also build the tool of screen-printing on fabric.

The way film studies major senior Nicholas Roberts talks about film technology reflects ideas about technology as tools that are similar to those of Lincoln. Through his work in the Film Studies Department he has been able to build what Lincoln would call a toolkit of fluencies with filming and editing software. Previously he used a program called Final Cut Pro 7, but this summer Whitman switched to Adobe Photoshop Premiere.

“It’s hard getting used to having to figure it out on your own … but eventually you figure out how to make it work for what you need it to,” said Roberts.

Whitman’s Film Studies Department trains students in basic camera use, but Roberts says it would be nice to have workshops to learn how to use specific cameras really well. For now, he improves his mechanical knowledge by simply trying things out.

“It helps to jump in, then find forums online. That way it’s tailored towards what you want to use it for,” said Roberts.

Prull said that similarly, psychology students have specific purposes for the technology they use.

“[The use of software] is not natural for students. If they use it, it’s driven by a need,” he said. “The programs are used as a means to an end. Like, if they design a survey where they need to know how fast subjects respond, that drives their need to learn Qualtrics.”

Lincoln observes that by delegating tasks to machines, students and artists can then put energy into something else. Instead of trying to come up with a way to consistently measure response times, psychology students can delegate that to Qualtrics, and instead expend energy on other parts of the survey. Instead of meticulously carving out wood blocks by hand, a graduate student of visiting artist Lari Gibbons uses a laser cutter and then is able to have many more blocks and rearrange them in different ways when printing.

New technologies make the work of many departments at Whitman more efficient, freeing up time and energy to complete questions or surveys. They also can help make visible intensely complicated theorized concepts thought up decades ago by, say, Einstein, in the case of Beck’s mirrors.

However, new technologies are also influencing how individuals in society think about things on a day-to-day basis. Lincoln points out that the way teaching and learning takes place today is different from how it ever was before.

“Especially because of mass communication, we have an excess –– not shortage –– of information. This only happened recently. But it’s all dispersed. We need to learn how to take atomized information and put it together in meaningful ways, to make an argument based on several different sources”  said Lincoln.

Lincoln’s own artwork explores how internet technology has changed the way we read, at least on the internet.

“It came from spending time on Tumblr,” said Lincoln. “I record what was on the blog and turn it into videos … [My artwork] looks creatively and critically at the experience of being online.”

He realized that he was seeing patterns in what was coming up on his Tumblr and other social media newsfeeds. As he follows three or four thousand people on Tumblr, he wasn’t looking at each entry specifically, but scanning.

“I don’t think it’s just me that reads in a more cursory way online. I don’t read in a linear manner, but my eyes are jumping around the screen,” said Lincoln. “Content becomes data, what jumps out and means something amidst all the noise.”