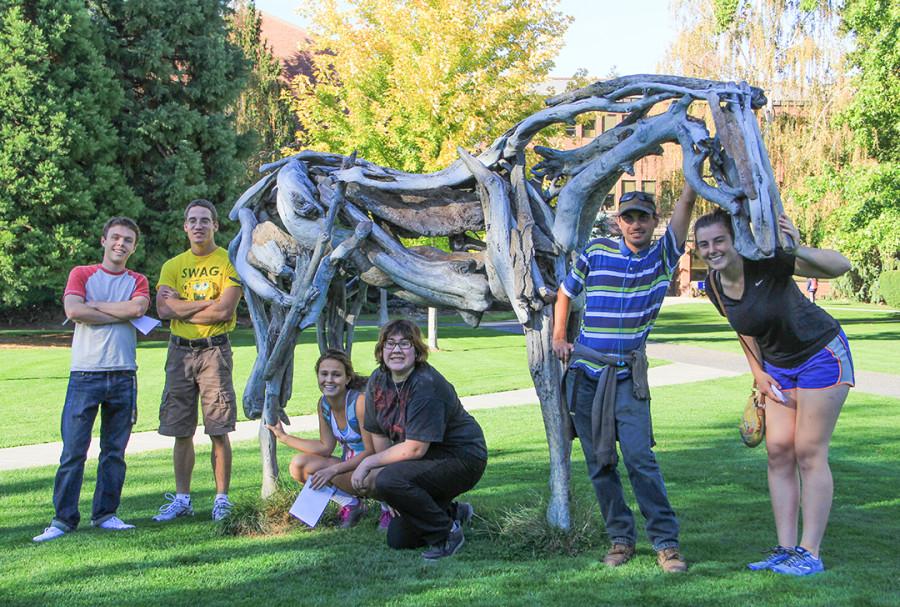 Photo of the Buddy Program contributed by Jeremy Nolan.

Living in the “Whitman Bubble,” most students spend most of their time interacting with people their own age. However, some service learning organizations on campus are working with community members to break this generational disconnect.

The mentor program matches Whitman students with children in various elementary schools, and the Adopt-A-Grandparent program pairs students with residents of the Odd Fellows home.

Sophomore Hannah Poukish has been part of the Adopt-A-Grandparent program for a year and a half and has been paired with 90-year-old Betty Harpe through the entirety of her involvement. Every Friday, she visits Betty at the Odd Fellows home located two blocks from campus.

“I’d only really talked to my actual grandparents before so this was a new kind of relationship,” said Poukish.

Although she felt it was a bit awkward at first, Poukish found that the best way to get comfortable with her grandparent was through conversation.

“I just started asking her about herself, like if she likes living here, her family and how she spends her time,” said Poukish. “She told me a little bit about her past. And I told her about myself too, and slowly over time we got more comfortable with each other.”

The pair spends the hour talking and participating in various activities, like games and getting outside.

“We play bingo and Yahtzee, and she keeps score for me, so I’ve been doing really well,” said Harpe.

If it’s a nice day outside, sometimes Poukish will push her wheelchair for walks outside.

“Being in nature that way is good for us both,” said Poukish.

The visits are an important part of their weeks and something both of them are genuinely excited about.

“Just having that once a week presence, where I’m always going to be there and she can depend on that, is really good for her,” said Harpe.

Harpe said she always looks forward to the visits.

“The best part is after being lonely all week, she comes in on Fridays and we have ice cream,” she said.

Poukish knows her time with Harpe is appreciated.

“It can be hard for her when her friends can’t hear her, or they have their own health problems to deal with, and just to have someone younger and from a different place in life, it’s nice to have that perspective,” said Poukish.

Harpe said she’s gained quite a bit from knowing Poukish.

“It’s a cool program. We talk about what it was like when I was little and different things like that,” she said. “We look through my photo albums sometimes. But it’s mostly just nice having her be here.”

Poukish agrees that the program provides a much-needed break from life at Whitman.

“Sometimes I feel so busy and it’s really hard for me to relax and take time to be calm and be one on one with a person. It’s been really good for me. And we usually don’t do anything super exciting, but the thoughtful quiet time is so valuable,” said Poukish.

After spending so much time together through the years, the pair have developed a unique bond.

“She tells me that she’s sure glad she’s met me,” said Harpe. “We’re just compatible, we really are. We’re about the same.”

Sophomore Alexander Waheed has known his mentee, Sam B., for two years, since he began the Mentor Program. Waheed is both a friend and role model to Sam.

The mentors visit the elementary schools once a week, where they eat lunch and go to recess together. The program tries to match Whitman first-years with second-graders, so that ideally the mentor has the same student for all four years and the two can “graduate together”.

Waheed and Sam are one of those pairs. Eight-year-old Sam said that he looks forward to seeing Waheed every week.

“He’s like an average normal teenager who usually just walks around and talks to people and has some fun,” said Sam, clad in a Batman costume on Halloween.

Waheed said that the program chooses the mentor/mentee pairs very deliberately and does a good job of matching compatibility.

“The students who they pair us with pair us for a reason, so the student might have a tougher time at home, be really quiet or have trouble making friends,” said Waheed.

Waheed said that although Sam was quiet and shy at first, it didn’t take long for him to warm up to Waheed.

“When I’m there he just talks the whole time, which is great, but sometimes he talks so fast I can’t understand him,” said Waheed.

The pair bonds over playing tag and talking about mutual interests.

“We talk about new TV series, games and other epic stuff,” said Sam.

The action video game Borderlands 2 is a hot topic of discussion and is one of Sam’s favorites.

“It’s where vault hunters go on an epic quest to open the vault of treasure,” he said.

“We don’t really talk about anything serious. We mostly just goof around the whole time, which I think is fun. We tell jokes and talk about our favorite things. It’s pretty light,” said Waheed.

Waheed said that he’s not there to watch over his mentee or be a teacher. He’s just there to be a good friend and role model.

“When we get hot lunch he always takes a lot of vegetables to impress me,” said Waheed.

Waheed was inspired to join the mentor program from his experiences in elementary school.

On the hour-long bus ride to school, his school had a “bus buddy” program, matching upperclassmen with kindergarteners. Waheed was paired with a seventh-grader.

“She was super friendly, and I don’t remember that much about her, but I was really happy to have her there,” he said. “I just remember she was the cool kid, because proportionally she was twice my age, and that’s a lot older. It’s not quite the same thing, but I remember how fun it was to have a much older person to hang out with. I’m guessing it’s a similar thing for him. Ten years from now he might not remember my name, but I hope he remembers how it felt.”

When asked if he would be interested in participating in a similar program when he’s older, Sam replied positively.