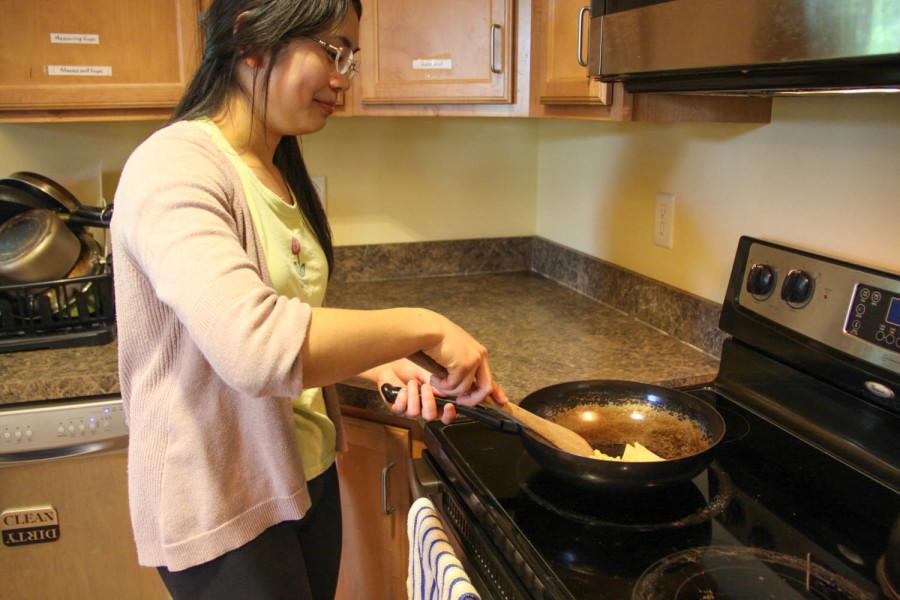 When students leave campus, they also leave the convenience and expense of a meal plan behind. For some students who already enjoy cooking, living off campus gives them a reason to cook, but for students who do not have a knack for it just yet, Whitman offers students a variety of opportunities to refine their culinary skills, such as the Life Skills program and student-run classes.

Life Skills classes at Whitman are designed to help students who may have some trouble cooking and adjusting to life off campus. This program, which was founded in 2011, has grown to offer three to six classes each week. These classes include sessions on cooking, but also cover things like first aid kits, bike repair and basic plumbing.

“The purpose of Life Skills is twofold,” said Assistant Director of Student Activities and Life Skills Program Coordinator Katharine Curles in an email. “One, to fill in the void of hands-on learning, and two, to partner staff and community members with students to share their passions.”

The classes cover a wide range of topics.

“This year we have done [classes on] investment banking, cookie making, conscious consumer[ism], budgeting and even how to tie a bow tie with George Bridges,” said Curles.

According to Curles, the majority of classes, particularly food-based ones, tend to fill up within 24 hours.

Sophomore Phuong Le took a Life Skills cooking class in a previous year. She learned how to use a baking oven by making a walnut mocha torte.

“Interestingly, before [the class], I had no idea how to use a baking oven because my home in Vietnam did not have one,” Le said. “There was no need for it …. So the Life Skills cooking class was the first time I had ever baked a cake, and it turned out really well.”

After taking a class, Le felt motivated to try new recipes. Her positive experience encouraged her to take up cooking, which led to better budgeting skills.

“Being able to cook saved me a lot of money while giving me more autonomy in making what I want to eat,” Le said. “Being able to both cook different things and cook under time constraints has made my decision to live off-campus next year a no-brainer.”

Sophomores Godwin Wang and Kangqiao Liao also started a Chinese cooking class this year, separate from the Life Skills program, hoping to give students and themselves more variety in foods. Both are international students who felt their Chinese cooking skills would give students an opportunity to learn more about the culinary arts behind Chinese food. They also saw the classes as a way for to them to refine their own skills.

In their class, the two teach students what to pay attention to when cutting, flavoring and cooking Chinese food. For one class, they taught students how to make assorted pan-fried noodles.

“We heard from a lot of students who are living off campus,” Wang said. “They said they [were] very interested in the Asian cuisine and cooking skills … I think it’s a good chance to meet new people and also get practice [in cooking].”

“Most of [American-Chinese restaurants’] dishes are not very authentic,” Wang said. “To provide authentic Chinese cooking skills is another goal for the class.”

According to Wang, the students’ responses to the classes have been very positive.

“They love the class,” Wang said. “Every time, we have a lot of students come in, but they are not the same group of students. I think everyone wants to have a chance to try.”

Senior Phoebe Horvath’s love of cooking came from her mother, who taught her how to cook.

Horvath has now been off the Whitman meal plan for five semesters. She said she enjoyed the convenience of the dining hall, mainly for its wide selection of food, but she only found time to bake. But now she has the freedom to cook her meals and said she enjoys the freedom of it.

“By cooking my own food, I can just make delicious things I enjoy eating,” Horvath said. “It’s so relaxing to be able to take time out of my day and to cook food and be able to create something, especially being creative and trying new things.”

While Horvath considers cooking a leisure activity, she said she still learns life skills in the process. She said she encourages scheduling times for meals during the day and allocating a specific amount of money to groceries.

“Figuring out a budget and figuring out what’s best for you, [whether it’s] going grocery shopping once a week,” Horvath said. “Make sure you have enough food. I think a lot of people are intimidated. Start simple.”