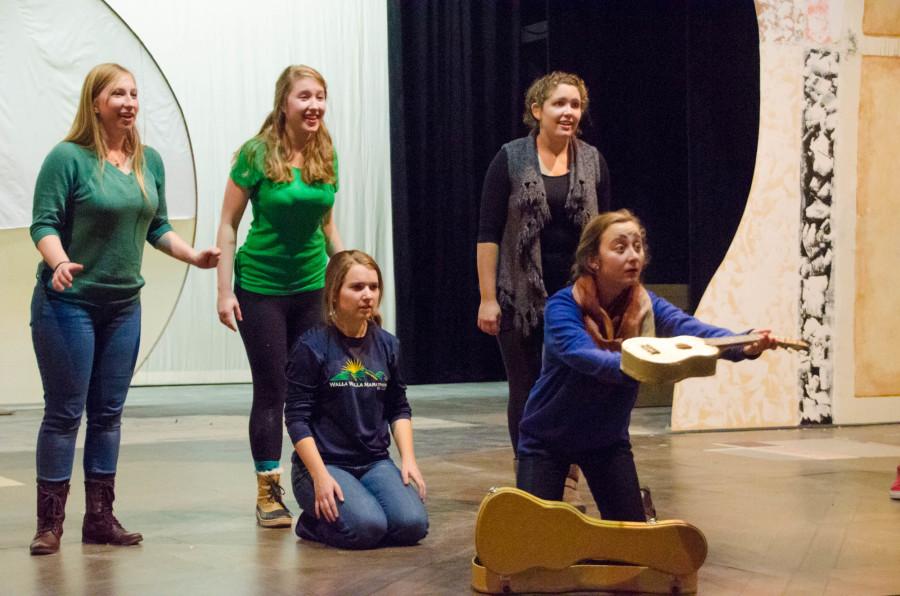 Have you ever wanted to see a sword dancer, a group of clowns, ukulele players and a ballerina on stage at the same time?

If so, the Harper Joy Theatre variety show “Ukulele!,” which will run from Thursday, Dec. 12 until Sunday, Dec. 15, is the perfect performance for you. The show is a little different than your average play –– it gives students the opportunity to showcase their talents instead of memorizing lines for specific characters.

First-year Haley Forrester will be performing a dance called “Raksal Sayf,” which is translated from Arabic as “dance of the scimitar.” A scimitar is a curved sword. Forrester began learning this sword dance from her mom when she was about eight years old, and she got to hold her first sword when she was in sixth grade.

“I feel so blessed that my mom started doing this because it’s a cool way to connect, and I don’t think [it’s] very typical,” said Forrester.

Although this will be the first time Forrester has showcased her sword dance in a performance setting, she has performed basket dance with her mom’s troop and bahngra style dance with a troop from her hometown in Eugene, Ore.

Forrester will be sharing the stage with a few other performers.

“In [our] performance of ‘Ukulele!,’ it’s not just me on stage –– it’s also a juggler and a ballerina. We have to coordinate a little bit, especially because I have a weapon on stage,” said Forrester.

One of the jugglers in the show will be sophomore Travis Wheeler. Wheeler, who is currently president of Whitman College’s juggling club, dabbles in juggling balls, clubs and rings.

“[The club] started last year in North Hall with the realization that my neighbor also juggled, that juggling is awesome and that we could make a club and extend said love of juggling to others,” said Wheeler.

Unlike Forrester, who is involved in theatre, Wheeler’s style is most aptly named “casual improvisation.” Despite his lack of experience, he is looking forward to “Ukulele!”

“I definitely enjoy juggling. Performing can be fun, but also stressful. It really depends. But I’m really excited for this show because of all the work that’s gone into it and because all of the acts are really cool. Definitely worth your while,” said Wheeler.

Another performer will be senior theatre major Nasko Atanasov, who will be showcasing a unique dance as well.

“I’ve always wanted to have my very own dance performance at Whitman doing the kind of dance I love, which is heavily influenced and inspired by the revolutionary movement Michael Jackson developed way ahead of his time. It has a lot of robotic themes as well as a certain fluidity to contrast the staccato of the machine,” said Atanasov.

Nasko is excited about the fact that “Ukulele!” allowed him to give such a unique performance.

“While I am dancing, there are people who play [‘The Dance of the Sugar Plum Fairy’] from ‘The Nutcracker’ on an amplified, electric ukulele, creating an entirely different world from the rest of the play. But this is what is so great about this show. You never know what to expect because we haven’t done anything like it before,” said Atanasov.

The individual contribution required for this show allows people not involved in theatre to showcase their talents in a unique environment.

“I hope the way that ‘Ukulele!’ is helping bring other people into the theatre department will encourage more students to participate. It’s a really fun thing even if you don’t consider yourself an actor. I think it’s great that Whitman offers these opportunities to try your hand at something new and be involved in a creative way,” said Forrester.