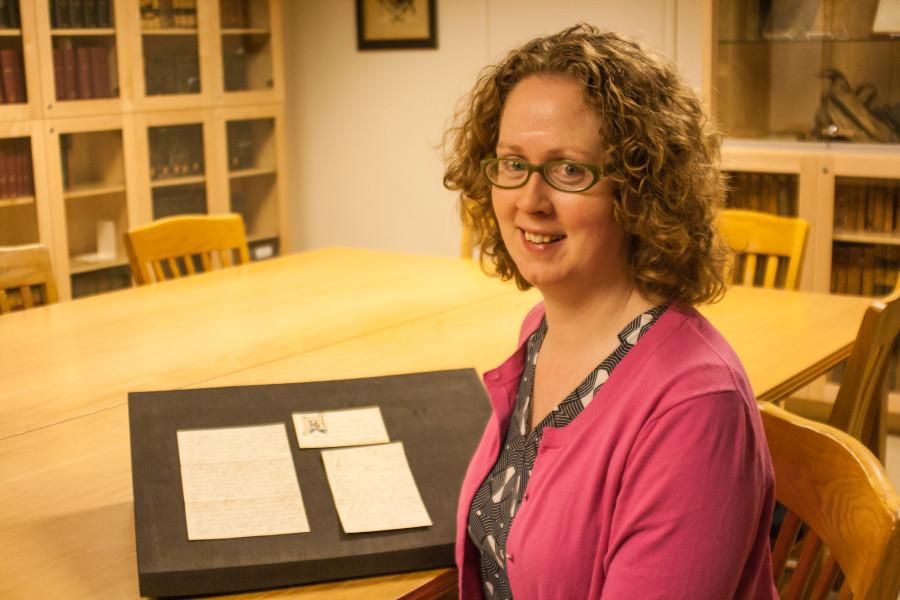 In the late 18th century, two nuns arrived in Florida to establish a convent school for underprivileged girls. They had only a table, a chair, a building and $2, but because they received overwhelming support from the community, they eventually founded the Academy of Holy Names.

Over the past summer, four French majors read this story in the letters of Sister Mary Augustin, a nun who left her family in Quebec and started convent schools across the United States.

This nun’s letters were the primary focus of a Perry Summer Research Grant. Associate Professor of Foreign Languages and Literature (French) Sarah Hurlburt and Archivist and Special Collections Librarian Melissa Salrin advised seniors Anne Gaskins, Annique Rice, Lauren Elgee and Meghan Browne as they transcribed and translated letters in order to gain a better understanding of the French-Canadian migration from Quebec to the Yakima Valley.

Though this research team began by reading through Augustin’s letters, which were donated by the Bergevin family, their project expanded to include donated letters from dozens of descendants of the Walla Walla Frenchtown settlers. By the end of the summer, approximately 300 new letter artifacts found a home in the Whitman College and Northwest Archives.

While they completed this project, the students got to learn about more about the process of working as an archivist.

During the first half of their project, the research team spent time developing an archival organization system for these letters. They placed each artifact in a protective sleeve, labeled each with a document number and, using glittery stickers, indicated whether or not each had been transcribed.

Salrin enjoyed helping these students get to know the archival process. She believes that part of her job as an archivist is helping students to understand the importance of preserving materials in the archives.

“I don’t intend for every student who comes through the door to decide to be a historian … The point is understanding that these things are important, so as a society, we need to take steps to ensure they’re taken care of,” she said.

In order to ensure that documents are preserved, of course, archivists must acquire documents. This requires forming bonds and establishing trust with donors. Gaskins, Rice, Browne and Elgee experienced this part of archival work as well.

During their project, they interviewed the descendants of the Frenchtown settlers to find out more about their memories of the letter-writers and to build relationships with the descendants so that they would know their heirlooms were being well taken care of.

Salrin notes that building strong connections with donors is imperative for the archivist.

“It’s about establishing connections and building trust. When [we] do work with the community, [we] want to tell them that they can trust us with their important documents. We will be good stewards of these materials,” said Salrin.

Salrin loves that her work with Whitman students enables her to bridge both the Whitman and local communities.

“It’s an exciting place to be because I get to really go out and forge connections between these different communities,” she said. “That’s something that is really important to Whitman, because the goal of the archives is to create an opportunity for students and faculty and community members to engage with history and with culture from previous generations, and [to] use that to inform and deepen our learning experiences.”

Gaskins is pleased that her work this summer helped to preserve the memories of an important population within the community.

“I think it’s important for validating the stories and the people who gave us letters. I know that for at least one of the women who gave us letters, it was really hard to part with the letters because they’re family heirlooms. But she eventually decided we could preserve them better than she could, and she wanted other people to have access to them. It’s important for this community that there’s a store of their history,” she said.

The project also enabled Gaskins and these students to increase their academic knowledge. After collecting and transcribing the letters, these four French majors did research on topics like epistolary theory and the effects of globalization on these settlers. They plan to create posters to present their research at the Whitman Undergraduate Conference in the spring.

Additionally, the project affected these students on a personal level. It made Gaskins reconsider the ways in which she personally treats her documents. She talked about how she met a member of the Bergevin family at a Frenchtown Historical Society who believed, like Sister Mary Augustin, that writing letters was almost like visiting someone in person.

“He still writes letters to his daughter. When he sends them, it’s like he’s taking a moment and conversing with her and putting everything aside to spend time with her. And when she gets the letters, she spends time with him,” said Gaskins.

Working on this project inspired Gaskins to consider preservation in her daily life.

“It made me think about letters in a really different way,” she said. “I save all my letters. They’re my own personal archives.”