A Day at the Downtown Market 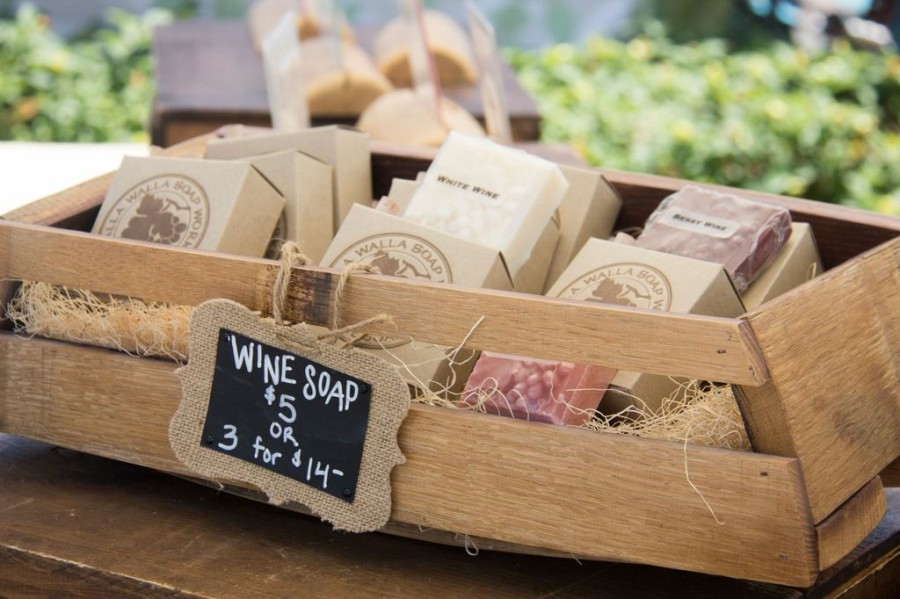 It’s a sunny Saturday morning in Walla Walla, and locals and Whitties alike are taking advantage of the lovely weather to walk downtown and visit their favorite summer haunts. The Patisserie patio is packed with people sipping café au lait, the line for Maple Counter extends to the sidewalk and a basket-carrying parade is making its way toward the intersection of Fourth and Main for the small town gem that is the Downtown Farmers Market.

On this particular market day, a bluesy band plays in the background as a sizable crowd packs into the shady rows between produce vendors, peering around one another to find the best zucchini or kale. Colorful craft booths are scattered across Crawford Park, and a wide spectrum of smells, from soap to peaches to barbeque, drifts through the pavilion. The market is a feast for all five senses––and for dozens of lunch-seekers.

I step into the produce aisle, and through the crowd, I quickly spy my favorite farmers market find: the elusive garlic scape. With a season lasting just a few weeks, this delicious combination of aromatic, herb and vegetable deserves to be purchased en masse and consumed frequently for the entirety of late June and early July.

Behind a mountain of scapes and garlic bulbs is Ralph Perkins, the owner of Middle Branch Farms in Milton-Freewater and a 17-year vendor at the Downtown Farmers Market in Walla Walla. Just three miles past the Oregon border, he cares for half a dozen cows and grows 18 varieties of garlic. With this impressive array of aromatics at his disposal, Perkins has endless options for garlicky meals.

“I eat garlic every day,” he said.

I confess my scape obsession to him and we compare recipes. He has an impressive list of culinary ideas, including roasted scapes with asparagus and elephant garlic butter. I am excited to bring my bag of scapes back to the kitchen and try a few of them for myself.

Across the aisle are Kimi Galasso and her husband, Christopher, of Stone Throw Farm. Their stand is practically buried under baskets of leafy greens, and at first glance, it blends in perfectly with the walls of produce around them. The Galassos, however, offer market visitors a little something extra––fresh juice made on the spot from whichever organic fruits and veggies they choose.

“It’s kind of the perfect breakfast while strolling through the market,” said Galasso.

Galasso and her husband both worked in the restaurant industry in Seattle before moving to Walla Walla in 2008. She jokes that this small town is the perfect place for big city restaurant workers to retire.

“We cooked professionally for a decade each, and we were ready to work with food in a different way. Walla Walla has allowed us to pursue dreams that were unreachable in San Francisco or Seattle … I adore Walla Walla for supporting us and helping surround us in our dream food community,” she said.

In addition to growing organic produce, the Galassos also work at the Blue Valley Meats Butcher Shop, which they opened with a crew two years ago, and at Valley Seafood.

Next, I talk to Pierre-Louis Monteillet, a native of Southern France and the owner and namesake of a Dayton fromagerie (French for “cheese shop”). He and his wife, a native of the Walla Walla Valley area, have been coming to the Walla Walla market to sell their spread of cheeses for seven years.

“The cheeses are made from goat and sheep milk, and we raise all the animals ourselves. We have 30 goats and 35 sheep,” he said.

In addition to producing and selling more than 10 varieties of homemade cheese, the Monteillets also offer two short cheese-making workshops and one intensive workshop exploring their entire farm-to-table process.

Next to Monteillet is the Midnight Oil Soap Company, a local producer of handmade goat milk soaps and herbal skin-care products. Soap is a family affair: Eric Hedine, the son of founder Kim Hedine, is helping out at the market stand while his mother mans the downtown shop.

He tells me the origin story for the company name. When his mother first started making soap, she was also busy with four kids. This led to many late-night soap-making sessions––that is, soap made while burning the midnight oil.

Now the company is an integral part of Hedine family life. Not only do those four kids help out at the shop and stand, but they also get to try out the products.

“We’ve probably tried all of the soaps. We’d get in trouble if we used anything else,” said Hedine.

Another young vendor at the market is Hermiston, Ore. native Catalina Coleman. She grew up on a farm and has been attending farmers markets for as long as she can remember. Her blueberries and flowers have made an appearance at the Walla Walla market for the past three seasons.

The market offers Coleman a change in scenery from her parents’ farm and her studies at Oregon State University.

“There is always something new every week,” said says.

Despite their different wares, all the vendors I spoke to came together on one important point. Everyone agreed the best part of working at the market was meeting and interacting with so many interesting people.

For organic farmers like Galasso, meeting customers is a valuable opportunity for sharing food philosophies.

“We get to talk directly to our customers and describe how things are grown, [like how] we don’t use any sprays or chemicals, and we try to educate people how to grow their own food,” she said.

Pam Meredith of Just Right Granola aims to give her customers a healthy, delicious, homemade food product, and she always looks forward to receiving customer feedback. She made the original recipe with her friend six years ago, and has been trying new recipes ever since.

“We wanted to make granola that was healthier, more nutritious. Plus, I would’ve gotten bored with just the original,” she said.

She created her sunflower cocoa recipe after customers requested a granola without nuts, and she is currently working on a recipe excluding coconut for that same reason.

“Someone came back from last year and told me she can’t find anything like my granola. That’s what keeps me going.”

As its history and colorful variety of vendors suggest, the local farmers market is a source of excitement, drama, creativity and tasty food. It regularly offers Whitties and Walla Wallans a brief escape from campus life and a chance to feel more connected to the vibrant and close-knit community––a community many vendors suggest is rather unique.

“I have worked at and enjoyed many farmers markets, but the Wallas seem to have a â€˜can do’ attitude [and] a sense of community that is rare and beautiful,” said Galasso.

The market has had a bit of a rocky year. When the city decided not to renew the market lease for Crawford Park in January, disputes among several members of the Walla Walla Valley Farmers Market Association led to the creation of two separate market boards.

Under the management of Jayne Foster, the newly-formed Walla Walla Valley Farmers Market board worked toward relocating the market to the Walla Walla County Fairgrounds on Orchard St.

Meanwhile, several former board members established a partnership with the Downtown Walla Walla Foundation and formed the Downtown Farmers Market board. This contingency of the old board renewed the lease for the original market location.

At the start of the 2013 season, Walla Wallans had their choice of two markets: one at the fairgrounds and one at Crawford Park behind City Hall. According to each market website, the Walla Walla Valley Farmers Market has approximately 20 regular vendors and the Downtown Farmers Market has roughly 80.