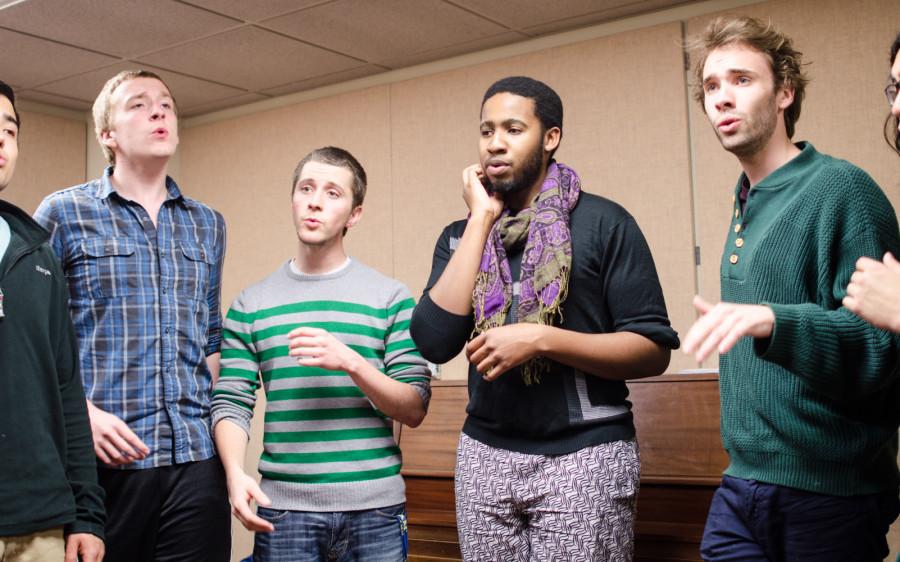 The annual Choral Contest will take place this Friday, April 26, but the preparation for this event has stretched back months.

The contest consists of separate contests among Greek groups, a capella groups and independently-organized unaffiliated students. For different groups, the contest means different things. But for everyone, it’s a time to see some of the variety of organizations around campus coming together to create music in a friendly environment.

Each group that competes this Friday chooses a charity for the raised money to go to if it wins. Despite the event’s nature as a competition, its end result is more cohesion both within separate groups and throughout the entire Whitman body that encourages music and creates an effort for worthy causes.

Sophomore Clayton Collins is directing both the Testostertones and Phi Delta Theta for the contest. Collins has found preparing with the two groups to be two very different experiences. According to Collins, the contest is a big priority for the Testostertones, as it is the largest audience they’ll sing in front of all year.

“It’s the time of year we get the most exposure, so it’s important that we put our best foot forward,” said Collins.

In preparation, the Testostertones have been holding extra rehearsals and focusing hard on the piece they’ll be performing. Unsurprisingly, the group will be showcasing a medley, composed by Collins.

“Medleys are typically the songs that people like the best,” Collins explained. “Going into it, it’s all about the medley.”

On the other hand, Collins says that while Phi has the same kind of drive, the intensity is much lower. The group meets every night after dinner to practice their performance.

Since most members of Phi don’t normally participate in a singing group, Collins finds more of a fresh excitement in the fraternity’s rehearsals.

“People are excited to do it, so it’s just more fun,” said Collins. “I’ve been pleasantly surprised with people’s musical ability.”

That’s not to say the T-Tones aren’t hyped about the concert, just that the stakes are considerably higher.

“The T-Tones are looking forward to the contest, but in a different way,” he said.

One of Phi’s competitors, Beta Theta Pi, also has had a great experience in preparing for the contest. Sophomore Theo Ciszewski looks forward to his participation this year, not only for the experience but for the meaning it has for the fraternity.

“It does great things for Beta. We have fun with it and it is a great opportunity to come together as a house,” he said.

What makes Beta stand out, Ciszewski said, is its use of both comedy and talent.

“I think we put a special attention into our song selection and arrangement,” said Ciszewski. “We strive for a balance between good sound and humor … only what the best opera singers do when they retire.”

Students who choose to lead these rehearsals are experienced in music and can arrange pieces for the group.

For Kappa Alpha Theta, this means seniors Diana Wu and Alex Kerl are heading up the group’s participation this year. Theta started rehearsals in March, and has been picking up the pace as the contest draws nearer.

Sophomore Theta Caitlyn Yoshina appreciates the contest as both a sisterhood and community builder.

“Every Theta is encouraged to participate, regardless of prior experience. The more, the merrier,” she said. “Creating music is such an incredible experience, and it’s just amazing to be able to share that with my sisters.”

Like Collins and Ciszewski observed, Yoshina explained that preparing within the Greek groups is largely a way to come together in a creative and fun way, instead of out of a serious and competitive drive.

“Rehearsals are really fun––basically, it’s us hanging out and singing together, with some structure of course. Diana and Alex are really good about keeping us on track with learning the music, but also giving us time to celebrate every achievement,” she said.

Yoshina also described the positive influence she sees the contest having on the Greek and Whitman communities. While some people within the Greek system may see it as an aggressive competition, she sees it as a moment to have fun with Thetas.

“For me at least, Choral Contest provides an opportunity to put less focus on ‘beating the other team’ and to just celebrate our Greek status [and] be proud of the awesome music that we all are able to create,” Yoshina said.

While Greek organizations and a capella groups come ready with members, independent groups must organize themselves “independently” when the contest rolls around every year. This year, sophomore Erik Anderson plans to participate in the Indy Men group up against the fraternities.

“It’s a fairly informal organization … [It] organically came together after a choir practice,” said Anderson. “I send out emails about meeting times, and we bring music and sing.”

This year, the group is organized by Anderson and led by senior music major Will Ekstrom, who has experience conducting and volunteered to lead the group. Despite the group’s casual organization, its members are united in a desire to celebrate music together and with the rest of Whitman.

“We are proud to continue the tradition of Indy Men,” said Anderson. “Choral Contest allows the entire campus to come together to celebrate. We hope that everyone can enjoy the friendly competition.”

No matter what group or affiliation these students found themselves in, all agreed that the Choral Contest is a fun time to come together and appreciate music within the larger Whitman Community.

“Literally anyone at Whitman can compete, like the men’s tennis team did last year … I think that Choral Contest presents a unique opportunity for all Greeks and independents to come together in the name of philanthropy,” Yoshina said.