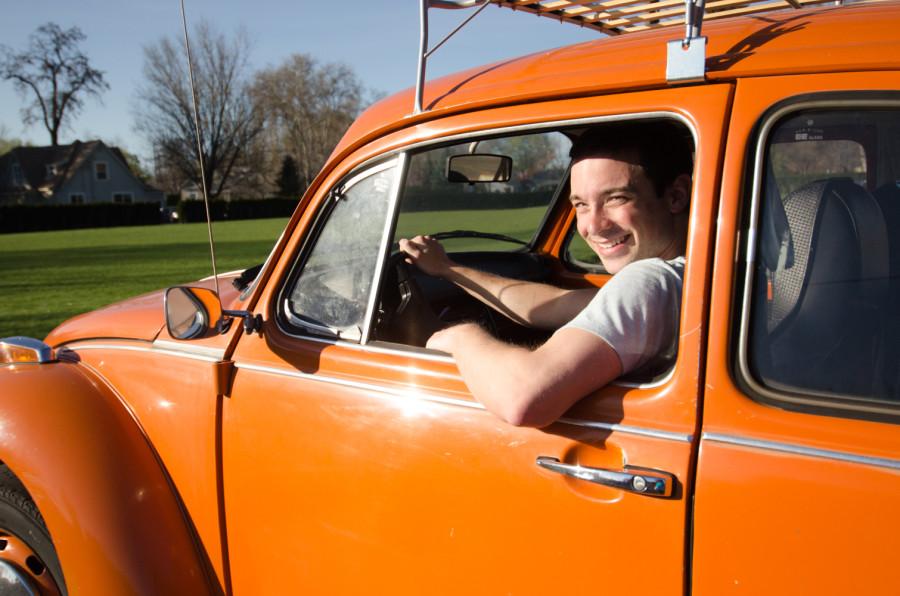 After spending last semester repairing his car, Steven Klutho â€˜13 and his â€˜74-ish Volkswagen Beetle are now taking to the streets and driving around town. After driving his orange automobile to the library, he gave The Pioneer the grand tour of his car––new engine and all.

“Albert Schueller, the math professor and my adviser, inspired me to get a bug because he got one a couple of summers ago with his daughter and they converted it into an electric car. So I was like, â€˜Whoa, that’s awesome,’ that it would be really cool to do.”

“I found it on Craigslist from a guy out in Kennewick, so I drove out there, test drove it, then bought it. Then 15 miles outside of Kennewick, it broke down catastrophically. Irreparable engine damage, smoking on the highway: It was a big mess. I had owned it for all of ten minutes, then it was already broken to the point where I couldn’t drive it anymore. But I thought, maybe this is a good thing, now I’ll have to learn how to fix it.”

“The engine is actually in the back. It’s an upgrade, it’s got dual carburetors, that’s not stock.  It’s a little bigger than a stock engine, and has a little bit more kick to it.”

“The odometer on these models only goes to 100,000 miles, and then goes back to zero again, and this odometer is broken, and stuck at 90-thousand-something. I have no idea how many times that’s turned over––it could have 90,000 miles, or it could have 390,000 miles. I have no idea. Through putzing around and going to get groceries, I’d say I’ve only put 50 miles on the car since fixing it up.”

“The most we’ve ever had in here is four [people], to go to Big Cheese customer appreciation day. That was the big event.”

“I’m a big fan of the orange color. That’s the first thing I want to do when I get home is to take it to a body shop, work out the dents and give it a nice new paint job.”

Zack Strater â€˜14 took The Pioneer for a spin through the wheat fields in his snazzy Volkswagen Cabria. (We promise, this isn’t product placement for Volkswagen.) He then took a moment to chat about his ride in the beautiful sunset.

“It used to be my dad’s car for about eight years, and then he had his little midlife crisis thing and got a smaller, sportier-looking car. This was around the time I was 16 and started driving and no one was using this car, so I decided to learn stick and drove the car, and it gradually became my own after time.”

“Its name is Herb. It’s kind of an old car now, and I wanted an old guy name and Herb seemed pretty good … I think if Herb was a person he would be much different [from how] I am, but I think we work well together.”

“Well, when I first started driving, I didn’t realize that it’s very important when the car is parked to keep it in gear. Once I forgot to leave the car in gear and just put the parking brake on and at some point in the night it rolled, and then rolled into our other car. It turned out that my car was fine, not even any bumper damage, but it destroyed the axel on the other car. That was pretty funny! Well, not for my parents, but for me. I was learning.”

“[I use the car] mostly so I can go home to Portland and back during breaks, but it’s really nice being able to go to the grocery store when I need to, and I really like being able to drive out into the wheatfields for the sunset.”

“I drove it this winter in some icy snow conditions with chains and it was good. Mostly because it’s a little brick.”