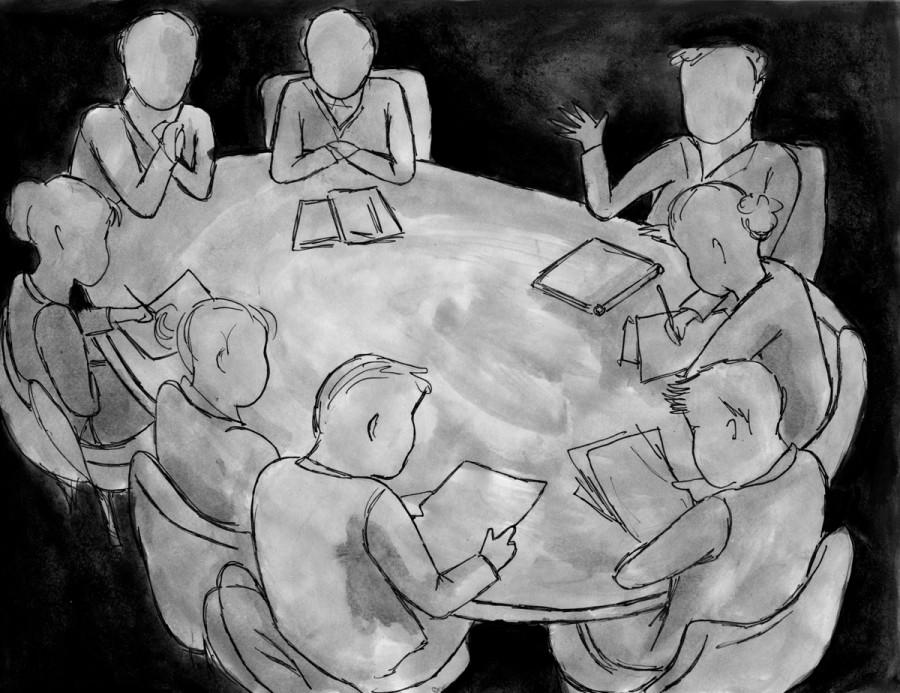 The 15 members of Whitman’s Board of Trustees have the power to set tuition, hire and fire the president and guide long-term policy for the college.

In spite of the influence they wield on campus, most students have relatively little knowledge about what actually occurs at Trustee and committee meetings, something this year’s ASWC administration is hoping to change.

Trustees, along with members of the Board of Overseers, were on campus last week to discuss everything from campus diversity to the ongoing capital campaign to increase Whitman’s endowment. Student representatives sit on four of the 10 Governing Boards committees––diversity, student life, academic affairs and enrollment––and also have influence in the budget committee via the campus budget advisory committee.

“The trustees decide which committees would benefit most from student involvement and participation,” said President Bridges in an email.

Student representatives apply for their positions and are nominated and appointed through ASWC. In addition, the ASWC President and Vice President are able to attend meetings and deliver remarks to the Board of Trustees.

“My role as student body president is to represent the students to the best of my ability,” said ASWC President Kayvon Behroozian. “We’re given a lot of access, so we try to take [advantage] of that whenever possible.”

Behroozian and Tim Reed, ASWC’s oversight chair and the student representative to the academic affairs committee, both felt that the college’s Trustees value student input and perspectives.

“I was surprised by how receptive the Trustees were to student input. It bodes well for the future,” said Reed.

Still, there currently exist no formal mechanisms for student representatives to report back to the campus from Trustee meetings, nor for students to contact trustees to express opinions or voice concerns. Behroozian said that his administration is exploring a variety of options for better publicizing information about what’s discussed, including a monthly ASWC newsletter and better communication with The Pioneer.

“This is one of the first times we’ve made a concerted effort to bring information back to the students,” he said.

Behroozian attended the student life committee meeting, which had presentations from staff and students. Among others, Noah Leavitt spoke about the Student Engagement Center’s efforts to improve networking opportunities for students, and Dean of Students Chuck Cleveland spoke about the changes made to campus sexual assault practices in the wake of two Pioneer articles last spring on the topic.

Reed said that the academic affairs committee focused mostly on the merits of applying for a grant from the Mellon Foundation which would allow the college to convert some faculty positions to tenure-track. Campus diversity was another significant topic of discussion. According to Reed, the Governing Boards members agreed that there is a need to set a metric to define what diversity actually means on campus.

“The Trustees were interested in how to best allow diverse perspectives to be heard here on campus, and how to make sure the entire student body benefits from those perspectives,” he said.

Longer-term, Behroozian said he hopes to convince the college administration and Governing Boards to allow students to participate in Trustee meetings in some capacity, rather than only attending committee meetings. He noted that seven of the 12 schools Whitman compares itself to when considering college policy have student representatives or Trustees who sit on their boards.

“You have to acknowledge and completely understand why the board is hesitant to allow students on there,” he said, citing the high turnover rate among students who are only at the school for four years, as well as concerns about confidentiality.

President Bridges said that while he didn’t feel a comparison to peer institutions on this issue would necessarily make good policy, he believes students should have some role in Trustee meetings.

“Relying heavily on what other schools do may not necessarily yield policies that align with our campus’ unique culture and context,” he said. “We should develop college policies and practices on the basis of whether they add value to our campus and its programs, not necessarily because other schools have them. Nevertheless … I believe that students should participate in many trustee deliberations, either by serving on committees and/or in the role of representative on the Board.”

Behroozian said that students have a place largely because they will ultimately be affected by most decisions the trustees make. In addition, simply listening to Trustee deliberations can impact students’ perspective on college policy, and vice versa.

“In cases where a student voice might add a new perspective, we hope to be part of that,” he said.

In the meantime, Reed said that Trustees continue to value student input, even when presented informally. He sees this as an encouraging sign, even in the absence of formal student representation on the Board.

“It reinforced [my] confidence in the fact that the college is being run by people who care about Whitman,” he said.