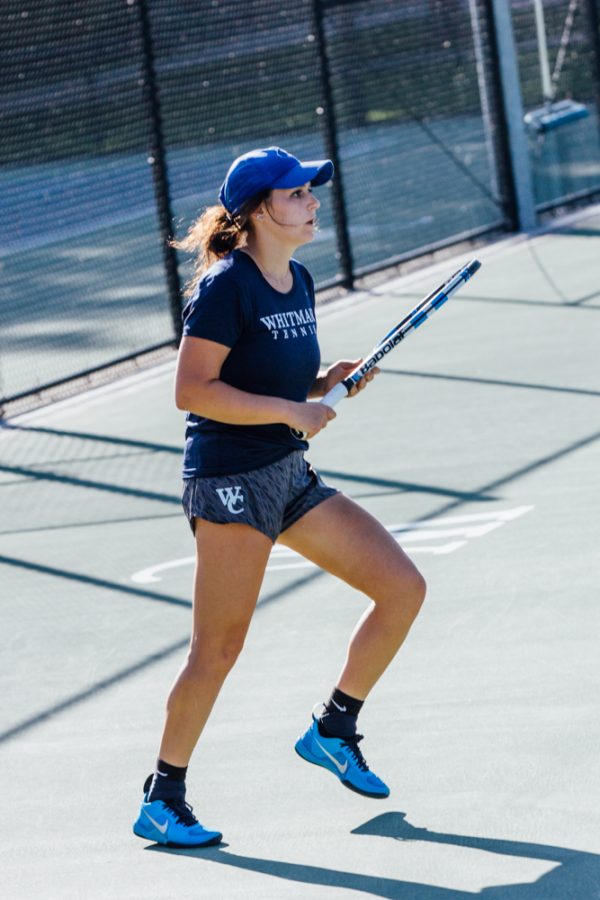 The women's tennis team enters the NWC Playoffs as the #2 seed and will play Lewis and clark in the semifinal before facing the winner between host Linfield and Whitworth.

On Saturday April 7 against Pacific Lutheran University (PLU), Whitman’s women’s tennis team not only secured a remarkable 9-0 win as a team, but also made history. During a doubles match with Andrea Gu, senior Hanna Greenberg joined Whitman’s Century Club by winning her hundredth career match at Whitman. To further improve her special day, she later added her one-hundred and first win with a singles victory over PLU’s Bayley Gouchanour.

When asked about how it felt to join the Century Club, Greenberg stated: “Joining the Century Club was a big goal of mine, and to be able to do it on our home courts was awesome. My team, coaches, friends and family made it such a special day, and I am so grateful for all of them.”

Head Coach John Hein was also very proud of such an accomplishment: “The way she played showed everything what we have seen for four years as a competitor. She is super athletic, and a fierce competitor who does it with grace and compassion; I’m so proud of her play and love that she’s got this milestone under her belt and is playing great tennis at the right time of year.”

As special as it was, Gu also expressed that what made the day so special for the Blues was the nature of the weekend:

“We hosted the match for the SOS fundraiser at Bratton, where we kicked off Saturday’s match against Pacific Lutheran with a kid’s tennis clinic. I got to work with some middle schoolers as we tuned up their groundstrokes as well as serves. That was such an energetic way to start the day, and it was fun bonding with children in the community who share our love for the game,” Gu stated.

The women as a whole have had a successful season, with a record of 7-1-0 (as of April 14) in conference. Coach John Hein had this to say this about their season thus far:

“I’m so proud of this team. The season has had a different rhythm than previous ones and some of the competitive identity as a team and individual growth we’d hoped to see early on came in March. Spring break was really important for us. I know I sound like such a coach, but the losses to Vassar and Trinity were a blessing that let us focus on how we need to compete rather than fighting ourselves for results. The team really stepped up and since then, we’ve really had a lot more ease and joy to our play and now things are really clicking as we prep for postseason,” Hein said.

Gu also felt that there had been some immense growth in her second year at Whitman. “As much as there are the usual nerves going into matches, the team’s support for each other makes every moment so enjoyable and I cherish all the memories we make, both on the road and especially at home. In doubles, Hanna and I have felt so much confidence since coming into the season, as well as building off of nationals in the fall. We complement each other very well all-around, so we’re pretty much unstoppable! It’s been such an honor to be playing alongside one of two amazing seniors on our team; I don’t want it to end,” Gu stated.

When asked what their hopes were for the rest of the season, both Greenberg and Gu expressed that the team’s main goal was to win the conference title; this would secure them an automatic bid to the NCAA tournament. On a more personal note, Gu looks forward to:

“Better outdoor tennis weather here in Walla Walla, and cherishing every moment until the end of the season,” Gu said.

Coach Hein expressed the importance that the team at this point in the season “find that balance of keeping our foot on the gas while trusting how good we are.”

A 6-3 win against Whitworth this last weekend secured the team a second-place seed in the conference tournament, taking place at Linfield on April 21 and 22nd.