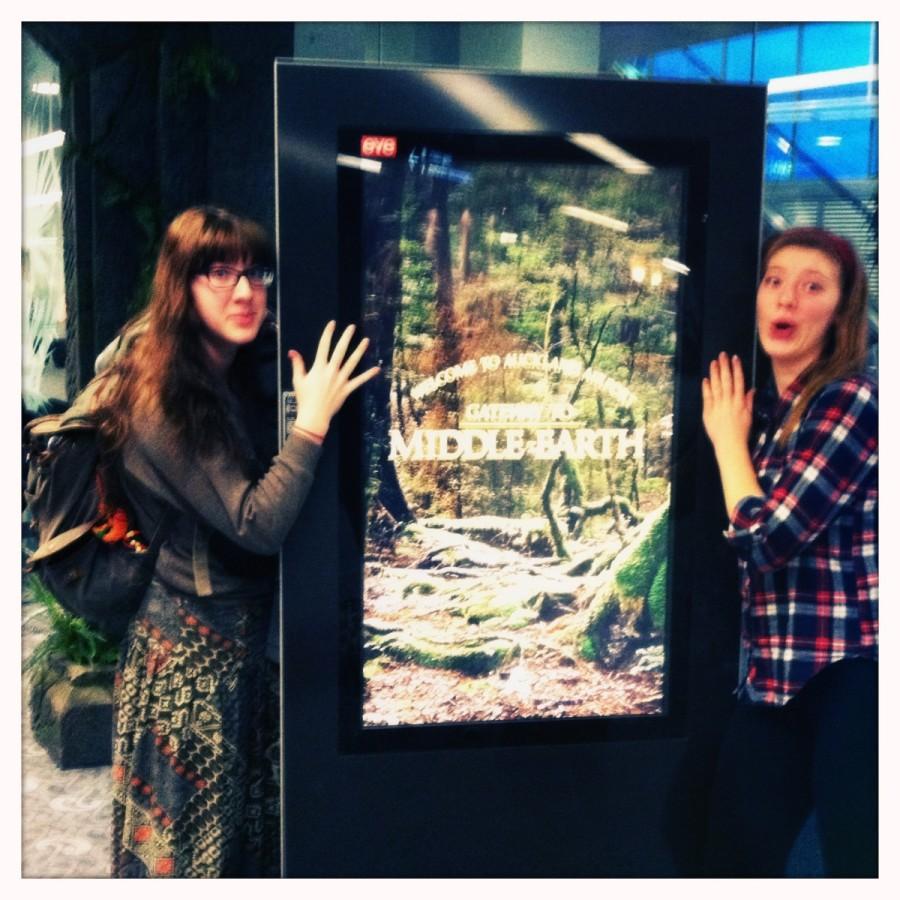 Welcomed with a Middle Earth sign and faux-Dwarvish gateways

The eagle has landed!

Bedraggled, exhausted, cranky. And oh so relieved. The weary family of travelers steps off the plane after an overnight and harrowing ride. My mother sums up our familial relief at being released from the confines of airplanes and breaks out the quote of the day:

Mom- “My ankles were so swollen [on the flight]. I looked like JaJa. JaaJaa?”

It’s hot and humid on the North Island. I soon regain feeling and am awarded with sweltering and sweaty feet. Imagine wearing a Thrift Shop-esque fur coat and drinking coffee whilst sitting in a sauna. Wool socks and the wintry garb worn for Canada’s weather did not translate well into New Zealand’s environment. I griped about my hot feet for a bit until I heard a crowd cheering for me as I exited the terminal. Wait. Nope. The crowd is carrying a sign that reads, “Congratulations Miss South Pacific!” Last I checked, I hadn’t entered or won any beauty pageants. They must be cheering for the girl next to me. Maybe that’s why she’s wearing heels and a pooka-shell crown.

Even in the airport parking lot, I was struck by the strangeness of my surroundings. Usually, cities seem relatively similar and somewhat predictable – there are roads, lights, other marks of industry. But somehow even my initial intake of New Zealand city environment had elements of novelty and felt different than other cities I’ve previously visited. Our drive in the countryside further served to reinforce the indescribability of NZ. Karli described the landscape as a “tropical Switzerland.” The rolling green hills reminded me of Ireland while some flora seemed African or Hawaiian. In the countryside there is this ancient mystical Irish vibe, but warmer, more lively, and less gray and dreary. The land seems to paradoxically embody both a temperate European environment and a hot and exotic landscape – some cosmic environmental collision that shouldn’t work, but it does and boy does it work well. After all, New Zealand is known for its geographical diversity and magical quality.

So far, this is how the trip has progressed: snowed in to house leads to manic shoveling, treacherous drive to airport, one flight canceled, one flight delayed, one connection missed, three extra days spent in the godforsaken and icy hellhole that is Canada (just kidding, I actually like Canada. And moose. Just not right now.), a 15 hour flight and we finally land in New Zealand. THEN, as we go to catch another flight from Auckland to Wellington, we have to land in a COMPLETELY DIFFERENT PLACE BECAUSE OF FOG! And get to enjoy a four hour bus ride back to where we were supposed to land after our one hour flight. This delay meant that we missed visiting Weta Workshop and Te Papa Museum (I put these in bold because y’all should add them to your “someday I’m going to go here” list. Usually, I have a lovely relationship with airports and the traveling they facilitate. I mean, if airports were puppies, usually we’re like this:

But this trip we’ve been a little more

Now to some trip highlightsâ€¦.

Things that are somewhat different in New Zealand:

People drive on the left side of the road
There are TONS of cattle and sheep on the roadside- Susan calls them “stud farms” (I’d like my own stud farm if ya know what I mean)
Some roads around Auckland are for drag racing
McDonald’s sells lamb
The landscape is transfixing and breathtaking (I’ve usually got my nose buried in a book during long drives, but I couldn’t take my eyes off the window during this ride)
Elaborate graveyards along the roadside
Celsius and kilometers (I weaned myself off Fahrenheit a few years ago, but I still don’t get kilometersâ€¦)
Outlets and hand sanitizers are often placed 6 feet up on a wall (what purpose does this serve other than taunting hobbits?)
We saw a lot of buses advertising their business site, Nakedbus.com, and displaying their slogan: “Stripping the cost of travel.” How clever. I’d ride that bus. If nudist colonies are going to rent a bus for outings, they should hire NakedBus.
I saw a store called “Shat and Sweet.” Yeahâ€¦.

So many new and fantastic objects, practices, points of viewâ€¦. Substitute “carpet” for “bus” and you’ve got me

The next morning saw us ditching buses and opting for a ferry. But not just any ferry. A gargantuan cruise-ship-sized ferry. I was offered a seasickness pill, but refused because, when I get angsty (as the travel hardships have made me), I revert to a sort of “come at me bro” mentality. I become increasingly stubborn and think, “I’ve put up with enough already- I can take a little more! Let’s get these series of unfortunate events all over with at once (somehow having forgotten that the world doesn’t work that way)!” I start screaming at the universe, “Do your worst!!! I can take itttttt!” Thankfully, Father, in all his infinite wisdom, intervened and ordered me to take the pill, thus sparing me a spiraling downward turn on the cycle of self-sabotage.

I’m used to seeing cleavage on girls. Not so used to seeing it on guys. Yet, for males in New Zealand, showing cleavage seems to be a thing – plumber’s cleavage, that is. I’ve suffered a number of surprise cleavage sightings and worry about people believing me, but am unwilling to gather photographic evidence. Nope, that’s not an image that needs to last forever.

I have seen, as of today, four men sporting a mullet and dreadlocks combo (that an average of one sighting per day). I’m not sure if this is a style or a fluke, butâ€¦ it exists. One dude was actually sporting a mohawk + mullet + dreads look that shouldn’t be possible let alone fashionable, but he totally worked it. An old man in a suit also had the dreaded mullet, but I don’t think he rocked it quite as rockingly. Maybe it clashed with the suit. Although I kinda dug the suit. I think he was wearing a suit for Christmas Eve dinner. We sat next to him. And next to some young One Direction clones who may have been Swedish. Or German. Or Elvish.

I can’t tell whether NZ is ahead of the cool curve, behind, or both. Half the time I hear songs playing that wee big in the US months/years ago, and the other half of the time I discover tidbits of their own music scene and espy looks such as those of mullhawkdreadet man. Maybe New Zealand is just on a totally different curve.