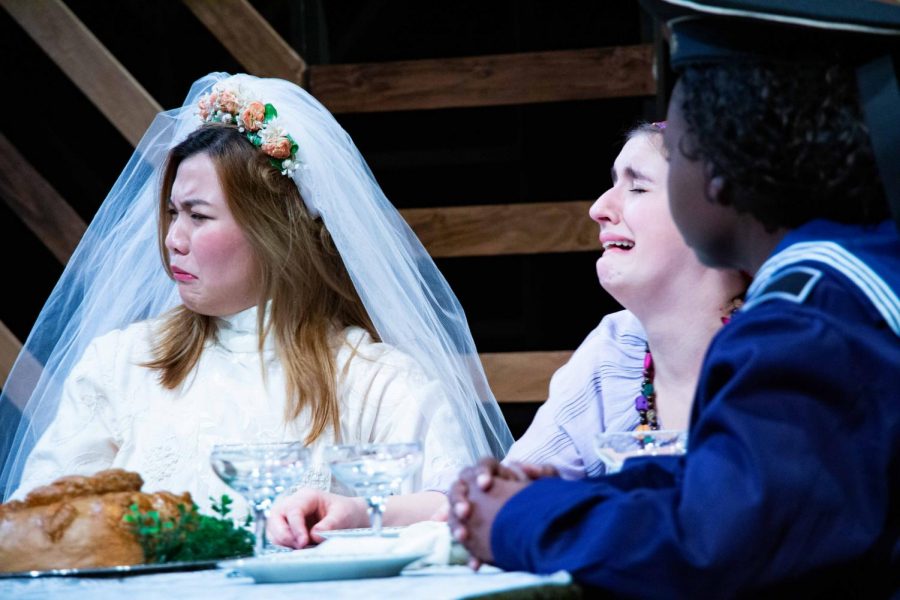 The stage showcased a marriage feast ruined by all parties involved, a bitterly loyal and loyally bitter widow, a proposal-turned-land-dispute-turned-proposal and a bank clerk at the end of his rope.

The comic plays, all written by Russian playwright and author Anton Chekhov, ran from March 5 to March 8. They were the senior thesis projects of Ashlyn Quintus, Ruby Daniel and Rose Heising.

“My thesis basically encompasses my process working on this production and a research paper,” Heising said. “I’ve been researching female-to-male crossdressing because two out of the three roles I play are men, also the representation of women in Chekhov’s work, and I’m also curious about the actor/audience relationship and how breaking the fourth wall affects the experience for both parties.”

Notably, every member of the ten-person cast played at least two roles. Sophomore theatre and economics major Sylvia Adome, who acted in “Wedding Party” and “Festivities,” said that the farces were “a play that wants to teach people about different personalities,” and that it could show its audience how a person can differ depending on their circumstances.

“We see a beautiful woman changing into an angry man turning into a sweet person,” Adome said. “In the comedic farces, you see different personalities of people in different characters, but with the same actor.”

Heising, who acted in “Wedding Party,” “The Proposal,” “Festivities” and underscored “The Bear” on the violin, found that playing different roles forced specificity on each role’s movement and speech.

“I rely on having particular gestures or vocalizations that help me slip in between parts quickly,” Heising said. “Costuming also helps, because muttering through a fake beard is an entirely different physical experience than flouncing around in heels and a corset, and all that helps inform the character.”

Professor of Theater Chris Petit noted that the multiple role casting made for “an ensemble-based production where everyone [could] be fully involved.”

Petit also stated that the plays, which he reached out to Quintus, Daniel and Heising to act in for their senior projects, were “excellent for [them] to exercise their many talents.”

But that wasn’t the only reason why he wanted to bring Chekhov’s Farces to Whitman.

“Mostly, I chose the plays because they’re funny,” Petit said. “We hadn’t done farce at HJT [Harper Joy Theatre] for a long time and I thought the material provided an opportunity for student actors to play in a broad style.” He added later, “I think [the actors have] brought themselves to their work and found the humor in the play.”

The farces drew many laughs, but for all their levity, much of their conflicts and questions were quite heavy.

“Using humor to deal with darkness is very human,” Heising said, “and I think farces and problem plays in particular help me reflect on how some of the problems I’m so stressed out about currently are as silly as they are serious.”

Adome hoped the audience would have a similar experience.

“[The farces are] giving you a chance to laugh at yourself, to see yourself in that comedic experience,” Adome said. “You’re going to laugh at who you are as a person who is reflected in that character.”

The characters of Chekhov’s farces — though written over a hundred years ago and often hilariously absurd — did provide the audience places to project and relate. There was a kernel of truth in every character: the anxiety of experiencing alarming physical symptoms, a family dinner riddled with strife, the pressure to uphold a pretense. But communicating that kind of hilarious humanity was a team effort.

“This cast is incredibly responsive and just downright fun to act with,” Heising said. “Whenever I felt exhausted or unfocused during rehearsals, I knew I could just listen and feed off of the energy of my scene partner. It really is such a joy to work with such a wonderful cast, director, crew and design team, and I will miss everyone a ton after I graduate.”

In all, Whitman’s showing of Chekhov’s Farces was a success, functioning as both a display of the skill of all who worked on it and a moment of laughter and reflection for those who saw it.