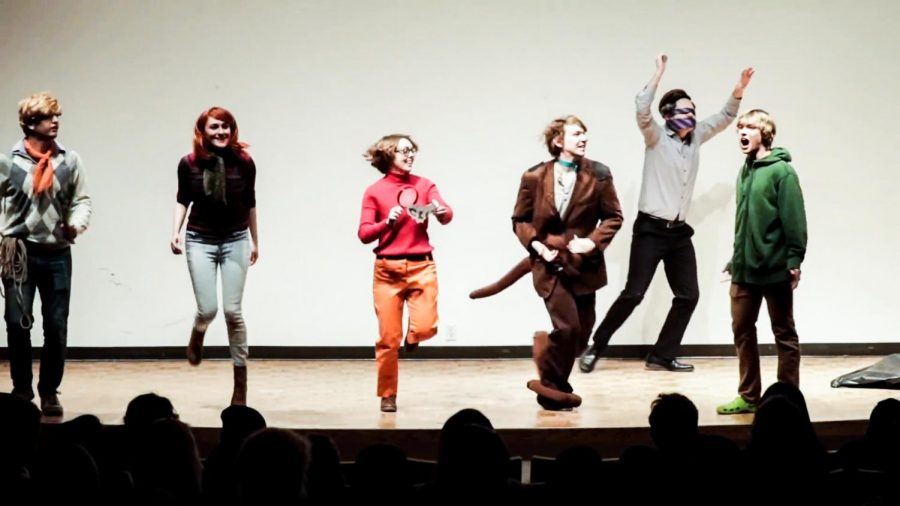 Whitman student actors portray Fred, Daphne, Velma, Scooby and Shaggy, re- spectively, as they solve mysteries in the midst of their sophomore year. Photos contributed by Fi Black.

A beloved cartoon took on a new form in Maxey Auditorium on Dec. 6, 2019. The “Scooby Dooby Doosical,” written and directed by sophomore Fi Black, premiered as a one-night show with music written by senior Koby Haigerty. The Whitman student actors in the production aimed to reimagine the classic characters as they navigated their sophomore year of college, exploring new mysteries and experiences.

While the “Scooby Dooby Doosical” provided an entertaining experience for members of the community, many involved in the production noted that its preparation opens a conversation on the role of student-led theatre on campus, particularly in regards to its accessibility.

After writing the show during the summer of 2019, Black brought it to the Whitman campus. Beyond the audition process, which was held in Harper Joy Theatre, the cast and crew of the show had trouble securing a reliable location for rehearsal.

“We struggled a little bit at first finding a space that we could consistently use,” said senior Cody Hipskind, who played Scooby Doo in the show.

With seven productions in a year and daily theatre department classes in Harper Joy Theatre, space for independently student-led productions tends to pose challenges, according to Director of Theatre Daniel Schindler. Black turned to Maxey as a venue due to its adequate seating capacity and availability for rental.

Beyond the annual One Act Play Festival, the main avenue for independently-led student theatre exists through the drama club, Schindler said. Students looking to produce a show may apply for funding through ASWC, where there is a $150 budget for student theatre. None of this budget may be used towards costumes, which are considered “personal property.”

Black said that having no institutional funding towards any costumes posed a challenge to the affordability of the project, as they used their own money to fund them. While the drama club does have access to a pre-existing costume collection, there are barriers that exist in its usage.

“We actually have a student props loft and costumes loft, which to this date hasn’t been super maintained,” said drama club secretary, senior Haley King, who played Daphne in the production. “It hasn’t been very clear who has access to it and when and why, and there’s not much of a system in place.”

Despite the existence of the One Acts and other department-related productions, Whitman students who aren’t involved in the academic discipline or mainstage shows emphasize the exigency of resources and structure for more productions like the “Scooby Dooby Doosical” to occur. The drama club has discussed possibilities including a fringe festival with opportunities for students to produce and act in multiple types of live performance, with the possibility of music.

“What I think is so magical about student theatre… is that it’s usually groups of friends who have established an artistic connection, collaboration, relationship, and who go into it as something that they want to do for fun and it’s something that they enjoy,” said drama club budget manager Grace Sanwald.

With opportunities to pursue theatre outside of the mainstage shows, students have the ability to explore their interests without the pressures of time commitment and prior theatre experience. These projects ensure lasting memories that shape students’ lives at Whitman.

“It was such a wonderful experience I would never trade for the world,” said Black, on the “Scooby Dooby Doosical.”