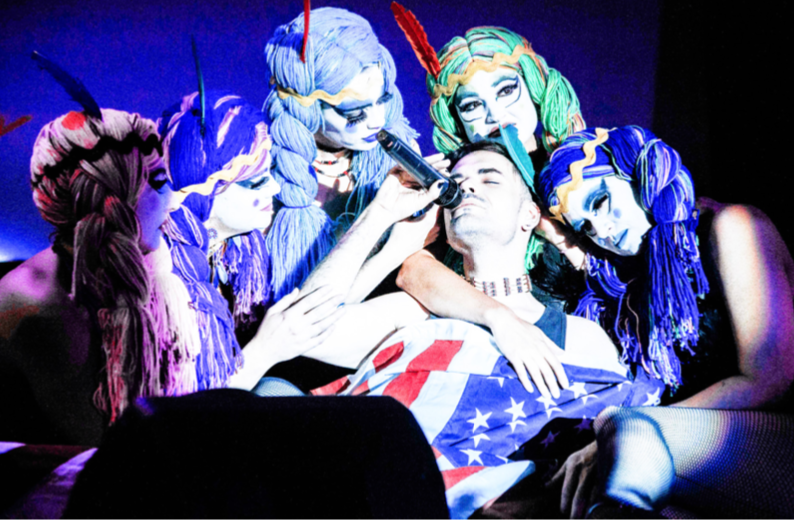 Last Thursday, Jan. 30, the usual humming of constant student rehearsal and performance in the Harper Joy Theatre was disrupted for a unique opportunity. Anthony Hudson, known professionally as Anthony Hudson/Carla Rossi, brought the one-person show, “Looking for Tiger Lily,” to the Alexander Stage in Harper Joy Theatre for one night, challenging students, staff and community members to examine not only different perspectives, but their own identities.

It was Visiting Associate Professor of Theatre Annaliese Baker who first had the thought of bringing Hudson to Whitman.

“I was really attracted to [Hudson’s] narrative of identity and identity of performance,” Baker said. “I thought it would be kind of a really interesting and topical and area-specific sort of conversation that [Hudson] might bring to Whitman and that we need to have.”

Director of Theatre Daniel Schindler agreed and reached out to see if Hudson would be willing to bring the show to Walla Walla.

Anthony Hudson is a self-described writer, performer, filmmaker, theatre-maker, drag performer and playwright. A member of the Confederated Tribes of Grand Ronde, Hudson is based in Portland and first gained recognition for work as Carla Rossi, “Portland’s premier drag clown.” Hudson began performing ”Looking for Tiger Lily” about four years ago out of a need for artistic expression and personal challenge.

“The dare with it, really, beyond letting people know the sincere me beyond Carla, was I was terrified by the idea of performing without drag, ’cause it’s like armor, so the challenge of ‘can I do a show as myself?’” Hudson said. ”And then I had this question of what would that show be, and it would have to be about growing up and why I’m doing whiteface, and that all traces back to watching ‘Peter Pan’ as a little kid, the 1960 one.”

That version of “Peter Pan” plays a central part in Hudson’s show. The movie, which features a blonde, white actress playing the role of Tiger Lily, princess of what is supposed to represent a Native American tribe, was a big part of Hudson’s childhood.

“This could be ground zero for all of my identity confusion where it’s like I was… a little mixed-race native kid watching a white person play cartoon Indian basically,” Hudson said. “What did that sort of schism implant in me, I guess, was the question.”

Before the show, at Hudson’s request, senior Nick Jacuk and junior Erica Keevama of the Indigenous People’s Education and Cultural Club at Whitman gave a land recognition speech, acknowledging the original inhabitants of the land that Whitman stands on. They also presented a gift, which was received by a representative of the Confederated Tribes of the Umatilla. After the representatives left the stage, the lights came down and the show began.

The show, an hour-long exploration of identity, self and family, is difficult to describe as just one thing. Fitting, given that the show discusses not fitting into any particular box.

“It was really good,” first-year Clara Leith said. “The different elements of media and visuals and song and dance and storytelling; I just thought it was really well put together.”

“It was appropriately serious but it didn’t take itself too seriously,” Paige Sorgen added.

Both students thoroughly enjoyed the show and said that given the opportunity, they would definitely come to something like this again. But according to Hudson, when the show first started, there was a definite fear of relevance.

The show was followed by a talkback, where Hudson sat on the stage and discussed everything from identity struggles to astrology with the audience. This is a regular occurrence.

“I always like when there’s moments of ‘I can’t relate to this, I don’t feel attacked by it but I can’t relate to this; can we talk about it,’” Hudson said of the talkbacks. “And it’s always nice to kind of find an empathic connection with people… to try to understand where we do share space.”

Hudson was only here for one night, but Schindler would like to have more shows like “Looking for Tiger Lily” come to Whitman.

“I think it is our responsibility as a performing art venue to showcase voices that might not get showcased,” Schindler said, “and it’s something I want to try, and would like to do more of.”

“Diversity makes us richer,” he added, “and the more and wider range of voices, we have especially in the performing arts, the better off we all are.”

Hudson certainly brings a distinct voice to the theatre and notes that “Looking for Tiger Lily” is not the end. The sequel, a full-length play, is coming to Portland in May, making it clear that Hudson’s journey is only just beginning.

Anthony Hudson can be found online at thecarlarossi.com.