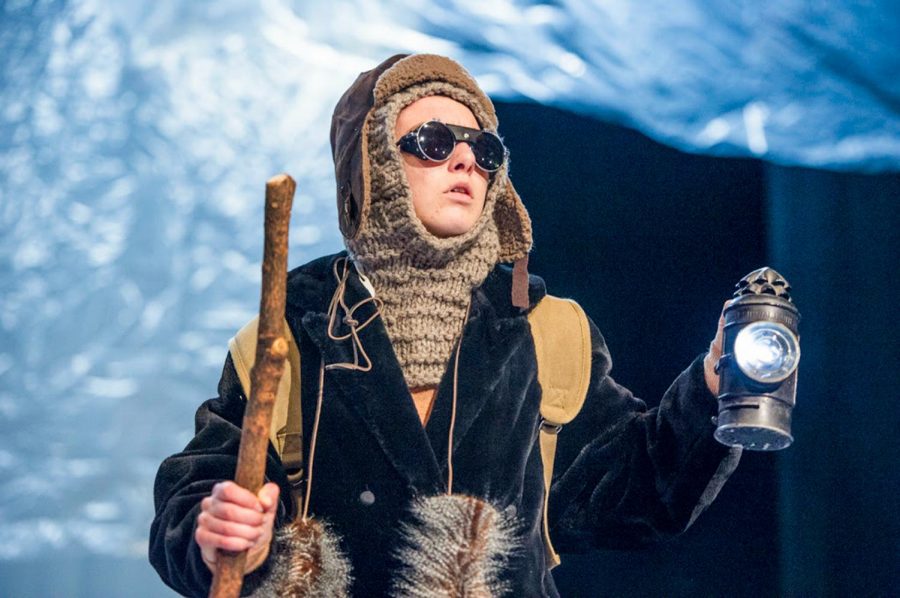 Frankenstein, played by sophomore Racheal Goldsmith Zucker, ex- plores "the top of the world," a location in the play. Photos contributed by Harper Joy Theatre.

This weekend, the theater department will bring Mary Shelley’s “Frankenstein” back from the dead, literally.

From Oct. 24 through 27, Director Annaliese Baker will bring an adapted version of the famous novel to Harper Joy Theatre. The play is an epilogue, continuing the story after the ending of Shelley’s book.

The adaptation, called “Playing with Fire: After Frankenstein,” has a more modern take on the tale and explores issues of ethics in science, time and internal conflict.

The play is set up as a series of flashbacks that uncover what occurs after the end of the novel. The audience sees what unravels as the two main characters, Frankenstein and the Creature, become more acclimated to one another and attempt to comprehend their fates.

More direct dialogue between Frankenstein and the Creature occurs in the play compared to the novel. Stage Manager Hannah Marker speaks to the interaction between the characters.

“The direct contact between characters allows for a lot of character and relationship nuance and depth,” Marker said.

Over the past several weeks, the theatre department has been preparing for this first production of the academic year. Cast members and crew have been reading the show aloud during table work, discussing motivations for characters, creating elaborate set pieces costumes, memorizing lines and organizing all the moving parts required to put on a major production like “Playing with Fire.”

“This is my first show in college,” Brown said. “There was distinctly a lot more table work than I have been used to in the past.”

First-year actor Natalie Traw, who plays Elizabeth, described the production as an integral collaboration between cast and crew members.

“As the talented crew working on the show adds more props and scenic design and costumes, and as we discover how to best tell our story, the actors really begin to do the best work of the process and eventually make the show performance ready,” Traw said.

With the play incorporating a modern take on the novel, the actors suggest that there are many lessons and takeaways for the Whitman community.

“I hope from watching this show Whitman students will be able to gain a greater understanding of why people do bad things,” Brown said.

With the production opening the weekend before Halloween, spirits are high among the cast and crew.

The show has also been an avenue for students who are interested in acting or production — first-years especially — to become easily involved in the theatre department at Whitman.

“I’ve felt so welcomed right off the bat, learning a lot and meeting so many amazing people,” Traw said.

After kicking off this first show of the year, the theatre department is especially excited about what’s to come.

“We have a cadre of amazingly talented guest artists for the 2019-2020 academic year,” Baker said.

With excitement high, it’s expected for the adaptation “Playing with Fire (After Frankenstein)” to be a great success.