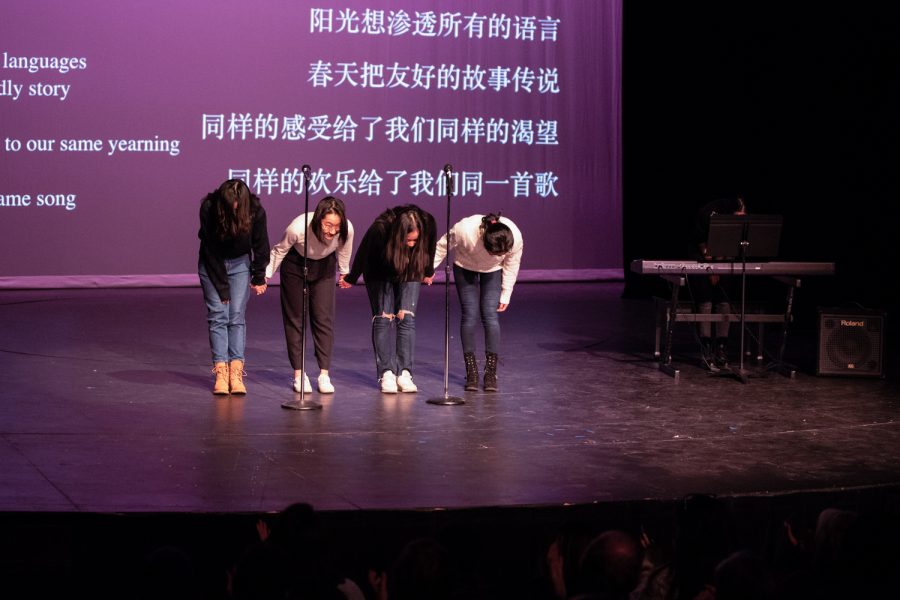 Coupled with a zine presented to audience members as they entered, the concert strives to spark dialogues about freedom and give voices to underrepresented groups, most specifically people of color. The Freedom Songs project began in 2014 when Whitman alumnus Joel Ponce 16’ observed a need for more musical opportunities for people of color. Senior Dorothy Mukasa, the 2018 Freedom Songs Creative Director, has been involved with the event since its founding. Of Ponce’s motivations, she says:

“He felt like a lot of the music on campus, whether that was a cappella groups or the music department, wasn’t necessarily showing these different perspectives of issues.”

Ponce established the Freedom Singers, an a cappella group designed to empower voices of color. The name draws its inspiration from the traveling Civil Rights era vocal group, which sang protest songs to support activist groups including the Student Nonviolent Coordinating Committee. The campus group pays homage to the original organization but performs in conversation with contemporary themes.

First-year Freedom Singer Leisha Casimiro says that the piece “Ella’s Song,” is “acknowledging the injustices and how we need to be more aware of it, and speak more about it.”

The performance presents a unique call to action for those in attendance. Mukasa emphasizes how the concert requires audience involvement in activism to effect real change.

“You’re not always front and center, you’re also having conversations with people, you’re also leading in discussion,” Mukasa said. “You don’t have to be the frontliner to be an activist.”

The event opens essential dialogues about the various types of freedom. The performances centered around themes including pain, generational trauma, education, immigration, unity and change.

Sophomore audience member Blanca Jaramillo says of Freedom Songs, “It was such a good way to express something other than just in words, including music and poems.”

Also included in the event were performances in video format, one featuring violinist Lydia Ra, sister of senior editor-in-chief of the Freedom Zine Esther Ra, and the other showing the musical for the song “Immigrants (We Get the Job Done)” from the Hamilton Mixtape.

“I think our hope with Freedom Songs for home and belonging was not just talking about Walla Walla and the US but also other perspectives that make up our community,” Mukasa said.

Freedom Songs is an attestation to the diversity of experiences in the Whitman community. The concert represents the various definitions of freedom as well as the unity found through art.

“Even through pain, powerful things can happen,” Mukasa said. “Beauty and talent come out of it and change the world.”