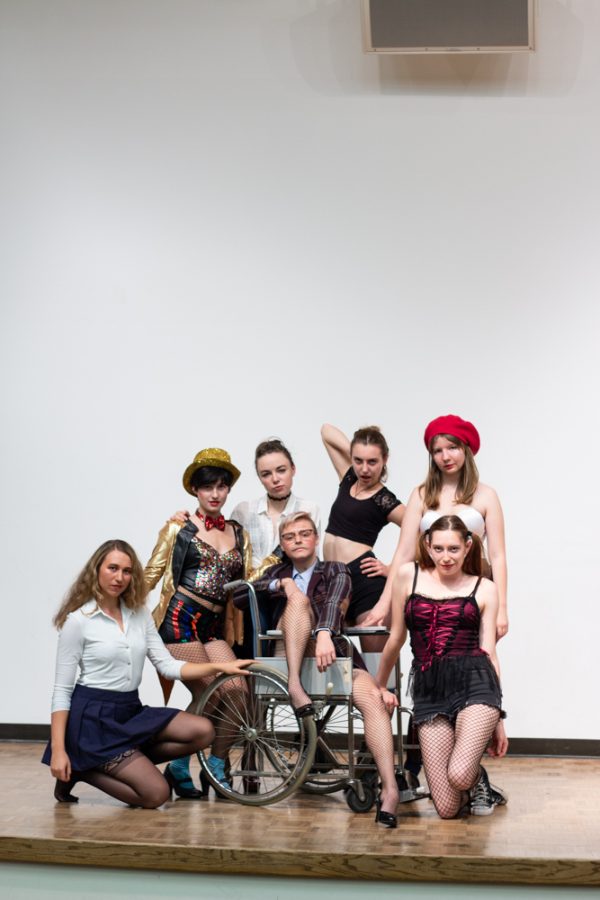 On Nov. 2, The Rocky Horror Picture Show stormed the aisles and pounded the stage of Maxey Auditorium. A national and Whitman tradition, the eclectic performance involves a horror film screening, a shadow cast and musical dance numbers. The dress code is less is more, and the language is the dirtier the better.

“The Rocky Horror Picture Show” is a horror film first premiered in 1975. The film is based on a musical stage production of the same title. The film follows a young engaged couple that finds themselves in a castle — home to a mad scientist and servants dressed in elaborate costumes — after their car breaks down.

Cast and audience members are dressed in thigh-highs, garters, corsets and stockings. For a moment, one forgets that they attend a small liberal arts college in Walla Walla, Washington.

The student-run show was directed by vetted performers, seniors Tory Londrigan, Willa Johnson, and Laura Jessich. Jessich speaks of the show’s instrumental role in helping her find friends and her place at Whitman College.

“The chorus members are not required to go to any of the rehearsals, just the dress rehearsals, but I went I went to every single rehearsal for six weeks because I just loved it so much.  I made amazing friends there and I just felt so comfortable, I could be myself,” said Jessich.

The audition process of the show is as unique as its content. Students improvise to a short clip from the film, which typically involves an impromptu dance number and lip-syncing. If a student is given a leading role, they are grandfathered in for the following years. This creates an ensemble where half the cast instructs the blocking of the show, while the other half learns and absorbs this new information.

Jessich speaks of the carefree nature of the show: “It’s super low key since it’s like a shadow cast performance. There is no line memorization or anything. You can just fully be your character and not have to worry about anything.”

This year’s performance marked a significant change to the script of the show. Cast members felt the script needed to be tailored to fit this time period and the audience. Traditionally referred to as “trannies,” the name for chorus members was revised and changed to “whores.”

One of many difficult decisions that the cast had to make, many felt that the word “trans,” unlike other terms which have been reclaimed such as “whore” and “slut,” was overly political and triggering to use at this moment.

“I’ve been having a lot of critical discussions with my housemates about which callbacks are appropriate to use in the show. What is right for this environment of transgression and what is too far?” said senior Natalie Thiel, a member of the chorus.

Thiel discusses doing research with her housemates, all of which are involved in the show, about the options for callbacks that other productions have used in the past. Along with a controversial show, the cast members have also had to deal with numerous sensitive topics surrounding LGBTQ culture.

“It was made at a very different time than the one we live in now. It’s a really important piece of art and culture for the queer community and for people in general, but it also has a lot of problems. So we’ve been trying out how to navigate those in a responsible but still fun and exciting way,” said Thiel.

When talking about their hopes for the show, many cast members described it as a celebration of one’s body and sexuality.

“It’s a way to celebrate, it’s a way for people to be themselves. Whether you are part of the show or you just come every year, or it’s your first time coming,” said Jessich.

An audience member talks of how the show has changed during her time at Whitman.

“I feel like each year it’s been different because there is a new cast and they bring a new sort of insight to the show, but since it’s the same movie and the same plot line that it doesn’t change much overall. [But] in the future, when someone else directs, it’ll definitely be a different stylistic approach,” said senior Samantha Tong.

The Rocky Horror Picture Show is a national tradition that began in the 70’s, during a time when sexual identities other than straight and cisgender were ridiculed. The topics of sexuality and queerness have only become more pertinent over time and will continue to stay relevant.