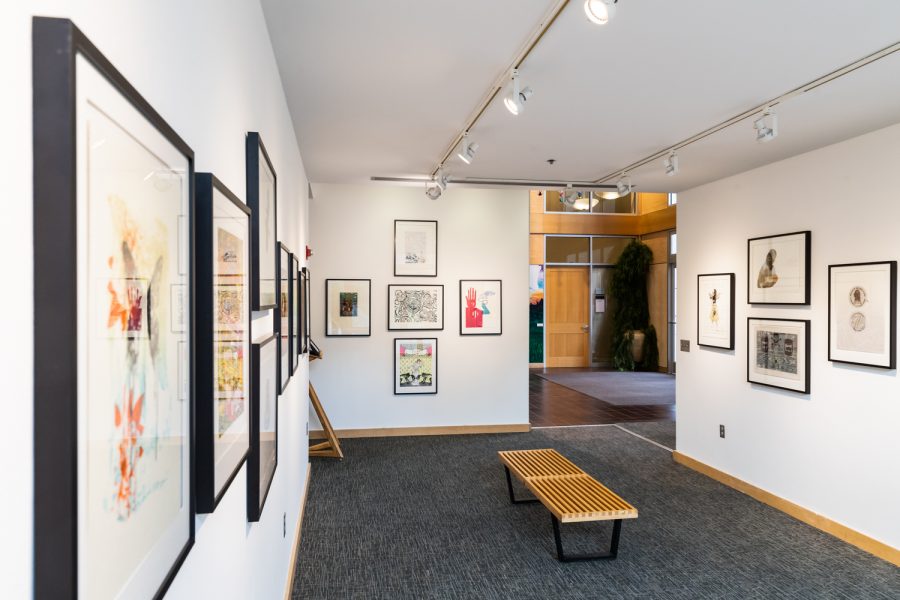 Located in the Reid Campus Center, the gallery of "Dog Head Stew" challenges visitors to rethink the narratives of indigenous peoples.

Concealed under layers of text and image, “Dog Head Stew – The Second Course” and “Dog Head Stew – The Third Course” celebrate disregarded narratives of native and indigenous peoples. Organized by former visiting artist, Melanie Yazzie, the Parents Fund Gallery in the Fouts Center for the Visual Arts and the Stevens Gallery in the Reid Center, respectively, houses an eclectic portfolio of prints made by thirty artists across the nation.

The first part of the exhibit, “Dog Head Stew – The First Course,” debuted in 2003 in Boston. The title of the exhibit was inspired by a fictional story of a similar name, “Dog Head Stew (for Fifty People),” by Dorothy Pennington, in which Native Americans conform to their stereotype as savages, serving dog meat to unwelcome non-Native dinner guests.

The exhibit invites artists from all cultural backgrounds to work with traditional and non-traditional archival print media. Nicole Pietrantoni, Associate Professor of Arts who specializes in printmaking, was one of the collaborating artists.

“We often say [prints] are very democratic in their format in that they can travel, they are highly portable. They are often things that because we make multiples, we can give them away or share them more broadly,” Pietrantoni said.

During the process of collaboration, printmakers freely exchange their prints. For “Dog Head Stew,” prints were shipped nationwide and shared via museums, galleries and the Library of Congress.

“One of the greatest things about printmaking, which I always tell my students, is that we make multiples. Things exist not just as a singular object, not one precious sculpture or one precious painting,” Pietrantoni stated in response to the medium of printmaking.

Collaborators layer excerpts from poems, maps, drawings, photography and other elements of design to create complex narratives. One of the prints illustrates the head of a wolf, an animal often perceived as a symbol of Native American culture, suspended in a mass of Jell-O. The juxtaposition between the wolf and the iconized American dessert invites critical reflection of native and indigenous peoples in past and contemporary America.

“Throughout art history and history, there are so many voices that have not been heard or represented and I think we need to do a better job, especially in our positions at a place like Whitman, to listen and hear those voices,” Pietrantoni said.

The cultural persistence of Native Americans and indigenous communities also manifests through black and white images and colorful comic strips. The nostalgic nature of the exhibit, with old Native American tales combined with contemporary American literature, transports viewers to a different time period and reminds them of the passing of time.

“It reminds me of a poem with the line ‘what do you think of your blue-eyed boy Mister Death?’” said Doyle Petersen, a member of the public, in reference to the poem “Buffalo Bill’s” by E. E Cummings.

The exhibit aims to explore neglected narratives of Native Americans, indigenous peoples and minority groups in general. Printmaking is merely one creative medium for political expression.

“It’s provocative of this time period and indicative of the United States today, a sad part of it,” said Kathleen Petersen, a member of the public.

“Dog Head Stew – The Second and Third Course” stems from the collaboration of artists from various backgrounds and alights open conversation about the history and current state of misrepresented narratives.