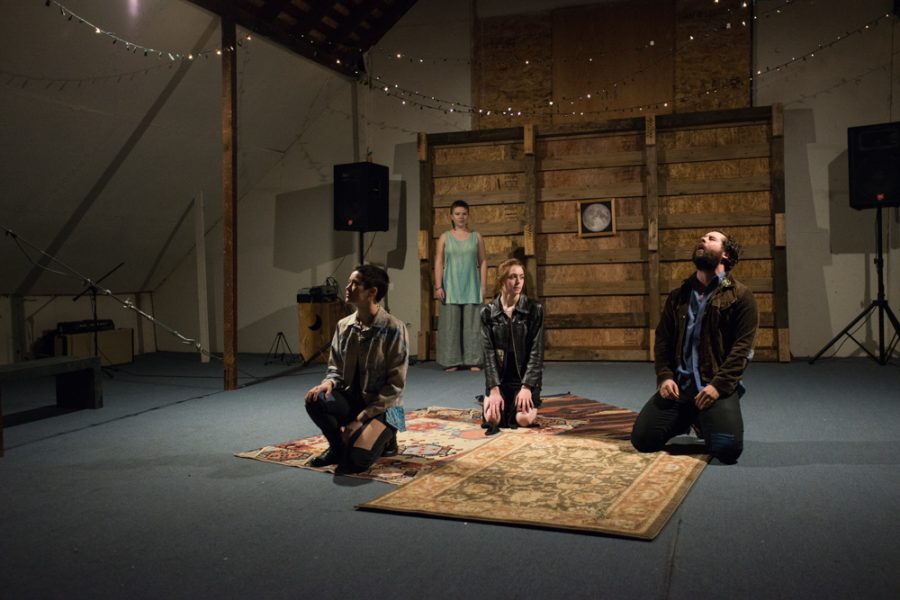 "love letters to the world as we would have it" is a play by Whitman student Kenzie Spooner '18 that features love letters they have written over the past year.

Sadie, Penny and Geo, all portrayed by Whitman students, lie motionless on a few threadbare carpets. Ocean circles them, her eyes drifting over the audience; she is dressed in the sea-green of the tormented ocean. The others are more traditionally Northwest: leather jackets, ripped and patched jeans and high top boots. Above these actors, twinkling lights shine in the semi-darkness of the Barn, an art studio cooperative located at Twelfth and Alder in Walla Walla. From behind the audience, a band enters the quiet with the first strains of a song inspired by “Dream in Blue” by the Stray Birds.

“love letters to the world as we would have it” is a play written by senior Kenzie Spooner that explores the intricacies of love, real and imagined, in contemporary culture. Spooner explained the thought behind it.

“I wrote the play to be a ritual for grounding,” Spooner said. “It’s been a difficult couple of months and so I wrote a play that creates a space where you can just be. I think I wrote that part of the play specifically for the queer and trans community that I am a part of. It was a way to be in this little blue, starry bubble for a second and take a break from the world.”

First-year Eva Sullivan, playing the edgy and skeptical Sadie, was intrigued by the indistinct barrier between audience and actors in this play.

“The fact [is] that it isn’t really like a play,” Sullivan said. “It’s not even that we break the fourth wall of the show, but that there isn’t a fourth wall. It doesn’t feel like a play really. It feels like just a piece of art that we are sharing with the audience. So yeah, I kind of felt that when I first read it because it read much more like poetry than like a scene. I loved that – that [Spooner] wanted to turn what seems like a collection of poems into a performance.”

This poetry of language manifests itself in the style of love letters read to the audience by most members of the cast. In fact, the origins of the piece lie in these love letters written from the director to a variety of people.

“Part of [the play] is a collection of love letters that I’ve written to various people, real and imaginary, over the course of the last year,” Spooner said. “None of them were ever sent. The play is a meditation on the muse and on the idea of this unknown beloved – this person that you don’t necessarily know at all, but you can project anything you want onto this concept of the beloved. You can write to them or at them, and how that all changes when they start writing back.”

Senior Noah Yaconelli, in the role of a Portland-style hipster named Geo, read several of these letters directly to members of the audience, as if imprinting them with features of the Beloved. Not only did this bring the audience into the world of the play, but it also highlighted the poignant nature of this disjointed and beautiful story.

“I thought the language of the play itself was awesome, and the music as well was excellent,” Monserud said. “I really dug the vibe of it, and I feel like we live in a very apocalyptic time and the play sort of captured that, and got some sort of, if not uniformly hopeful, optimistic ideas out of it.”

“love letters to the world as we would have it” is Spooner’s first play. With its contemporary discussions of love, hurt, fear and loneliness, Spooner demonstrates their ability to capture the human experience and recreate it before an audience in the loft of a barn, where the stars are strings of Christmas lights, and the words spoken are as much the throws of a passionate lover, as they are of college student wary of the greater world where the darkness seems all the more apparent. Take it from Kenzie Spooner – there are always ways to find hope.

“I tend to – when I leave Walla Walla – just go somewhere and I’ll just fall in love with a stranger for a day or a week,” Spooner said. “It’s in the play, but one time I fell in love with all six members of a bluegrass band playing at a farmers market just for fun, just because it’s an outlet for that kind of emotion, and it’s a beautiful thing to feel, and I can write about it.”