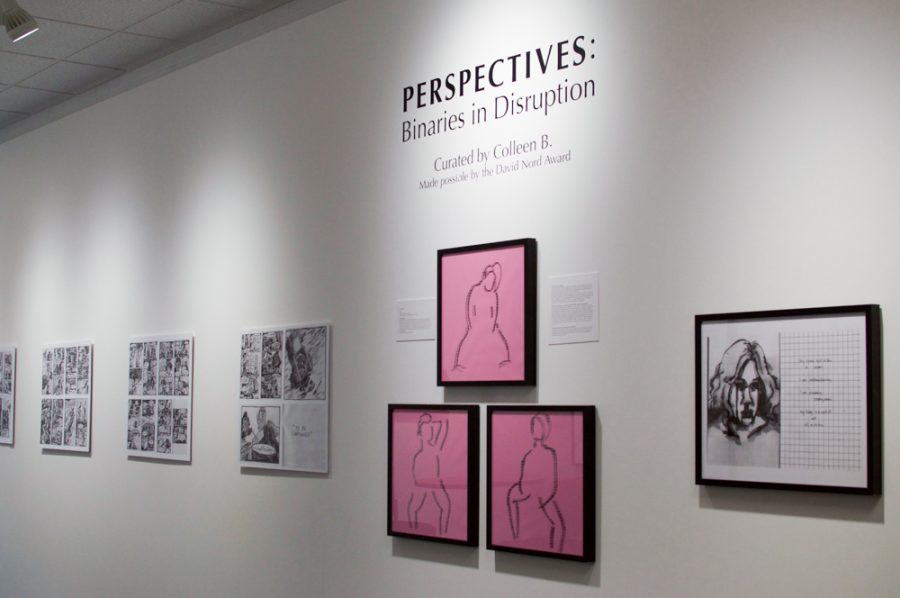 Artwork featured in Collen Boken's '19 exhibition "Perspectives: Binaries in Disruption" vary in medium and were all created by queer Whitman alumni.

Boken’s exhibition, located in the Olin Breezeway from March 27 to May 20, showcases a diverse range of mediums, with all artwork created by queer Whitman alumni. The exhibition explores the problem with binaries and shows that identities are much more complex than how definitions might paint them.

“The goal of this whole show was to show the problems of simple definitions,” Boken said. “Someone might be trans, yes, but that doesn’t really define them in a lot of ways, so I really hope people who come to the show see that experience is really what matters.”

The pieces in the show range from comic book excerpts to photographs. When asking for artists to submit their pieces, Boken also asked them to answer a series of questions, including how the artist would describe their identity, and how art can bring about change. Answers varied, as did the artwork submitted, bringing an abundance of identities to the forefront.

Alumnae Maia Watkins, Brie Strom and Emma Rust submitted a zine-like book that they had created together, and in that collaboration their own complex identities showed through.

“Colleen’s show was a welcome opportunity to make new art for a familiar audience, so Emma, Brie and I decided to collaborate and see what happened,” Watkins said. “We wanted to make a piece of art that was like a conversation while acknowledging subjectivity (in this way continuing to mirror the way that the show was curated by Colleen). The way each of us think about identity is different…so my own take on it is that each of us were putting forward our own narratives in a way that seemed right to us in the moment, and in that way sort of portraying a collaborative identity that I think is unique to queer spaces.”

Boken hopes to continue to curate exhibits like this in the future.

“Museums and spaces like this have the power to change culture in a lot of ways,” Boken said. “This exhibit kind of aimed to challenge culture a little bit…I think really the rewarding thing is it’s giving a voice to people…who may not have as easy of a way to do it.”

Boken spoke about what the exhibit means to her personally.

“There’s a part of me that still doesn’t believe this is happening, because when I started here at Whitman, I wasn’t sure if I was going to come out as trans,” Boken said. “I’m still not out to my parents; I was just not sure if I was going to come out here. Three years later, I’m not only fully out, but I have my name up on a show that’s just queer artists, and I think this is one of the biggest capstones to my journey here…That’s been really powerful for me in a lot of ways because it’s giving everyone else a voice, but at the same time, I think it’s my voice coming through as well for the first time in the truest way.”

Zheng’s “Embodied Viscera,” a book of twelve poems, is about their experience as a queer Asian Pacific Islander at Whitman, and it also aims to put forth a truth in queer identities.

“It [the book] functions as a mindworld in a sense—I allude to that term in the book—and that’s basically just the stories and narratives and worlds that we create in our bodies that is speaking its own truths,” Zheng said. “So ‘Embodied Viscera’ is really about just the bodily experience, the experiences of colors within these multiple identities that I hold, so it’s super intersectional, and it talks a lot about just what it means to love in a racialized body and the politics behind it, and it talks a little about diversity and queerness. It’s basically a big chunk of the embodied experiences I’ve had at Whitman that I wish that I had something like that to look for as a first year, so it’s…a statement of being authentic and being able to speak your own truths.”

“I wanted it to be a book because I wanted a way for me to be able to commission a queer artist of color and also a Whitman alum, and I knew that the best way to do that was to do it in a book form,” Zheng said. “And also, I just love books—I love things that are physical, and I just wanted to see if I could actually produce something that I would be proud of and that was physical…I think the words that I use and the phrases that I decided on using really kind of encapsulate the bodily experiences.”

Zheng, who graduated this past December, currently lives in Portland, where they work and is also planning a book release party for “Embodied Viscera,” of which they had around 235 copies printed. They plan to donate some of the profits from that to the Equi Institute, a clinic that provides healthcare to queer patients.