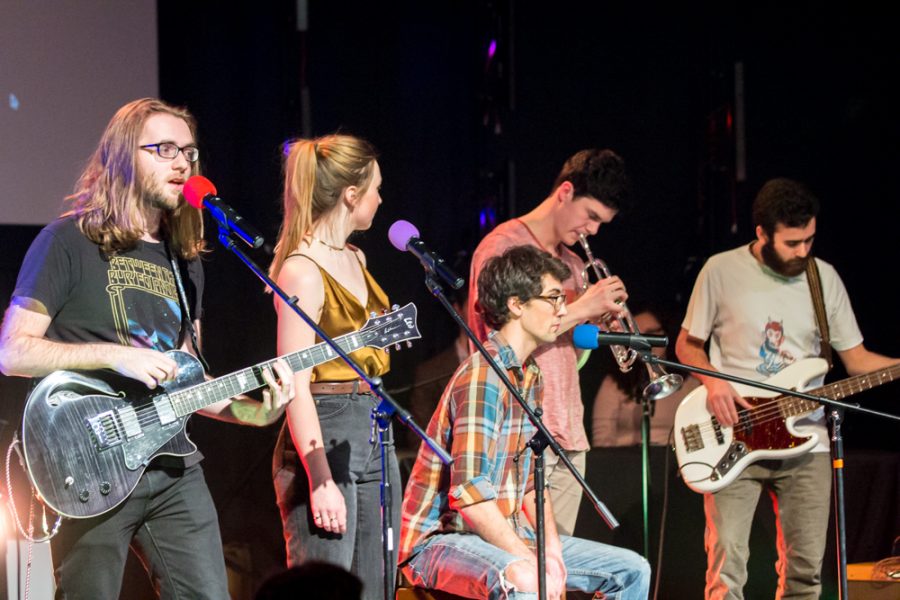 The three colleges in the Walla Walla Valley united for a night of music with “The Voice of Walla Walla,” the first ever tri-college singing competition between the schools. Eleven contestants from Whitman, Walla Walla University (WWU) and Walla Walla Community College (WWCC) performed the evening of February 3 at WWU before an enthusiastic crowd, who listened with much excitement and cheering before voting at the end of the night for their favorite acts.

Whitman’s very own Anthony Reale took first place singing “Corner of the Sky” from the musical “Pippin.” Sherman Scheid of WWU was voted second place winner with his performance of “Evermore” from “Beauty and the Beast” (2017) and third place went to WWU student Amanda Harrison, who sang “Hollow” by Tori Kelly.

While these three performers were named the official winners, the amount of talent each of the performers showed was astounding. From singing original compositions to well-known songs, the contestants all proved themselves worthy of being a part of “The Voice of Walla Walla.”

The music that night varied widely, showing off the diverse range of voices in the Walla Walla Valley. Danielle Rivera of WWU got the audience clapping with her energetic performance of Beyoncé’s “Halo,” while Whitman’s Amara Killen sang a soulful rendition of “Mama Says” by Ibeyi, accompanying herself on the piano.

Kosaka explained his thoughts behind the idea of “The Voice of Walla Walla.”

“I thought that something that really would interest all three groups was a music contest, because music is something that everybody loves, whether you like singing or playing an instrument, or whether you just like listening to music or singing in the shower,” Kosaka said.

Auditions for the competition were open to students from all three schools and were judged by the three student body presidents: Whitman’s AnnaMarie McCorvie, WWU’s Adam Hagele and WWCC’s Ricardo Aguilar. The judges chose eleven finalists to perform in “The Voice of Walla Walla.”

For Tehani Louis-Perkins, the Chair of the Whitman Events Board, watching the tryouts was especially enjoyable.

“I think just seeing the different students come out and try out [was the most rewarding part], especially because you kind of know who are the people who participate in a capella, or who play for Crossing Isaacs and all that kind of stuff — you always hear them sing, but to hear other people come out and try out who normally you wouldn’t see, or you haven’t heard, it was pretty awesome,” Louis-Perkins said.

From there, the event organizers put together a spectacular show framed with fog machines and flashing lights, complete with theme music from “The Voice” that played between each performance. The three judges sat onstage and congratulated contestants after they sang. Indicative of the success of the event can perhaps be seen in the full house that gathered to watch, bringing together audiences from all three schools.

Whitman student Annelise Ellingboe, who opened the night singing “Mistakes” by Lake Street Dive with her band, expressed enthusiasm for this collaboration, noting that the three schools do not often interact.

“I think the really cool thing about all this is that we’re all just coming together to make music,” Ellingboe said. “Music is something that everyone enjoys, and for the most part music talent does not differentiate between the colleges. There are talented musicians anywhere, so I think this is a really cool opportunity to put aside what differences we think that we have.”

Kosaka echoed similar sentiments and cited benefits of this kind of collaboration.

This event did indeed succeed in bringing together the different communities. Regardless of what school each contestant was from, the audience voiced their support with wild applause. For example, when Riley Handy from WWCC sang “At Last Then” by Etta James, students from all three schools cheered loudly. The decisive move of solidarity came about during first-place winner Reale’s encore, in which he reprised “Corner of the Sky” and was met with the phone lights of audience and fellow contestants swaying in the air. When he finished, the contestants connected in a group hug onstage.

Kosaka hopes “The Voice of Walla Walla” will become an annual tradition.

“I’d love for it to happen every year,” Kosaka said. “It’s something I’m going to definitely recommend to the next Social VP. And I would love personally to see it go from school to school, like every three years it would be at Walla Walla, every three years it would be at Whitman and then the CC, and I think that would make it a true tri-college event … If we make it an annual thing and every year we do it at a different school, I think that would really be exciting and it would make it something that would last for years to come.”