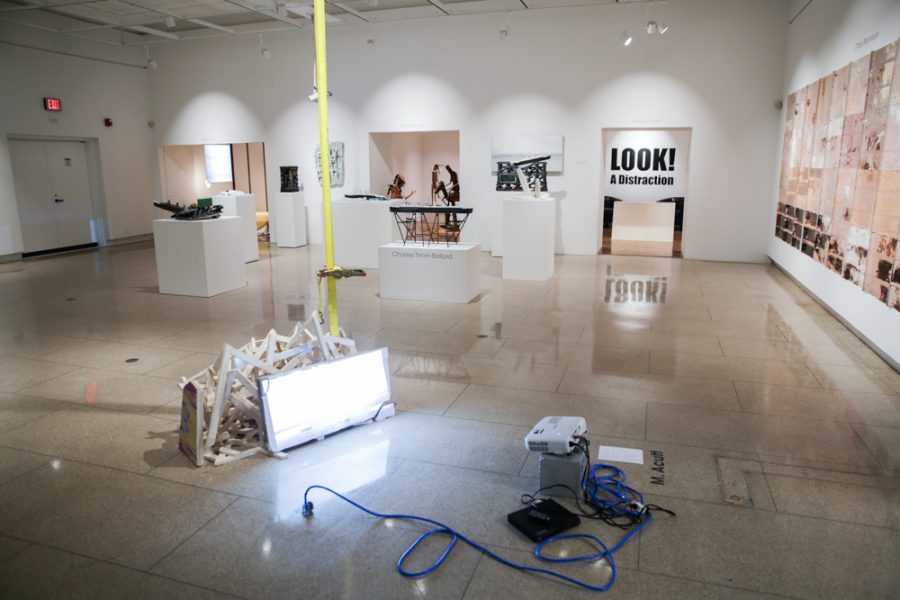 Sheehan Gallery now hosts a rare opportunity to experience art by all of the Whitman studio art department faculty in one space. This Whitman Studio Art Department Faculty Exhibition opened on January 22 and will remain up until April 6.

The exhibition features works by professors working with a range of mediums. The result is a diverse spread of work, ranging from sculpture, prints and ceramics to painting, photography and new genre art.

Each professor’s unique approach offers a new way of looking at art. For Professor Richard Martinez, his paintings are based in process: choices in terms of color, texture, scale and composition. Martinez spoke about the way his paintings emerge through the choices he makes as he works on them, often producing a different result than the idea he might have started with.

“Some images in my paintings are from earlier in the process, then they get covered up and then come through again,” Martinez said. “Other are images that are just built up.”

Much of his process, Martinez says, is based on intuition. As he works, he goes with what he feels is right. There is not an agenda at work. Consequently, there is not a single, correct way of looking at and interpreting his work.

“We’re [as artists] usually trying to talk about something that’s hard to define,” Martinez said. “That’s the nature of art. So letting the pieces speak is really important. And it’s good for students to see that, to start a dialogue with the art and see what questions arise.”

Martinez added, “I want people to notice how the paintings are done, the choices made in it, and they’re largely about having multiple viewpoints on things, finding things surprising to you.”

Professor Daniel Forbes’s work in the gallery, on the other hand, conveys more of his specific, personal experience. Displayed in the gallery are people and figures built from a variety of objects such as ordinary household objects, decorative pieces and kitchenware.

His motivation behind the pieces is the original story of Pinocchio, and the aspect of transformation into a masculine identity present in it.

“Each of these pieces essentially operates for me as a container of sorts,” Forbes said. “They’re all very autobiographical. But Pinocchio itself … it’s a very interesting exploration of historical masculine identities. But then for myself, as someone who has the prefix trans attached to my masculinity, the idea of the story of Pinocchio, which is very much about his desire to be perceived as a real boy or to be moved from object into being viewed as something human, is very significant for me.”

His pieces, then, contain stories of his own experience. Forbes has done assemblage work for a long time, and the nature of this work—collecting shapes and fitting them together like a puzzle into works of art—speaks to these experiences built into these pieces.

“It’s very meaningful that all of these things were created and ascribed a value and a function in society by whoever their previous owner or user was. And then through this reconfiguration, to be able to give them a new way of operating sort of allows them to overcome what people prescribed as their original intention and to transcend that to something else,” Forbes said.

Forbes hopes that his work not only gives viewers much to think about, but also that it will evoke certain feelings.

“The characters here are meant to be whimsical, but if you look at them closely, there’s also sort of uncomfortable aspects of each figure,” Forbes said. “My hope is that people who view these—if a bunch of kitchen utensils that are put together are able to invoke in the viewer some sense of empathy—that they may be able to translate that empathy to actual individuals of different occupations who are flesh and blood.”

Additionally, while most of the pieces have stories attached to them, they are valuable in themselves as pieces to look at with interest and awe without knowing their backgrounds.

“My hope is also that they’re just interesting enough to look at in terms of formal aspects, that people will find them interesting,” Forbes said.

Professor Maria Lux’s approach to her installation similarly challenges ways of thinking, but differs from both Martinez’s and Forbes’s works in its basis in research and scientific studies.

Lux’s art centers around animals, and for her installation in the Sheehan Gallery, she focused on two famous studies. One surrounds the work of a research assistant named Margaret Howe, who lived in a flooded house with a dolphin named Peter and tried to teach him English, eventually leading to a sexual encounter. The second is the story of Lucy, a chimpanzee who was raised as a human by the Temerland family and grew more comfortable around humans than around other chimpanzees.

Lux created a bathroom, complete with a bathtub in which sits a dollhouse inside a fish tank to represent Peter’s story. Joined to the bathroom is a bedroom, where a terrarium sits. Inside is a small chimpanzee representing Lucy, surrounded by Playgirl and National Geographic magazines, which the real Lucy enjoyed looking at.

Lux also created her own “Dreambook” magazines, in which she explains the two studies. The dreamy, idyllic quality of the magazines speaks to the optimism science can have.

Lux was interested in how each of the studies happened in the domestic space as opposed to a laboratory, and how that factor connected with them being sensationalized especially for their sexual aspects, leading to many of the other parts of the study being ignored.

“These [studies], and actually a lot of animal-related studies, have been predominantly women, families and couples that did them together, so there’s kind of this built-in family thing going on with animal-related studies,” Lux said. “I realized that the way people tell the story is part of what’s interesting about it, or the fact that these are such famous and popular stories that people like to speculate about or make judgements about, suggests to me that there’s something culturally really interesting about them as well.”

Lux hopes that her installation challenges the way people think about such controversial studies.

“I hope that my work in general unsettles people a little bit,” Lux said. “These are both really well-known stories, and to me, the traditional way that they get told is limiting, and then critical of a lot of things about it, and I hope that if I make this weird enough … then that might open up a space to think about them a little differently.”

Lux also spoke about the value of displaying her work in this academic setting, where other professors and students are studying many kinds of things.

“We’re embedded in this environment of learning stuff all the time,” Lux said. “Making an art piece is a lot like publishing a paper—this is the way that we put our ideas into a public setting, and then to me it’s like, ‘all right, let’s talk about it then, let’s have a discussion,’” Lux said. “So if something that I make in this room sparks a conversation across campus about something they’re doing, to me that’s a success.”

There will also be chances to learn more about other faculties’ work in the gallery. Throughout the exhibition, a series of individual artist talks will take place, with times and dates to be announced on the Sheehan Gallery website and the Whitman Events Calendar.