A Plush Platform to Share Music with Tiny Futon Concerts 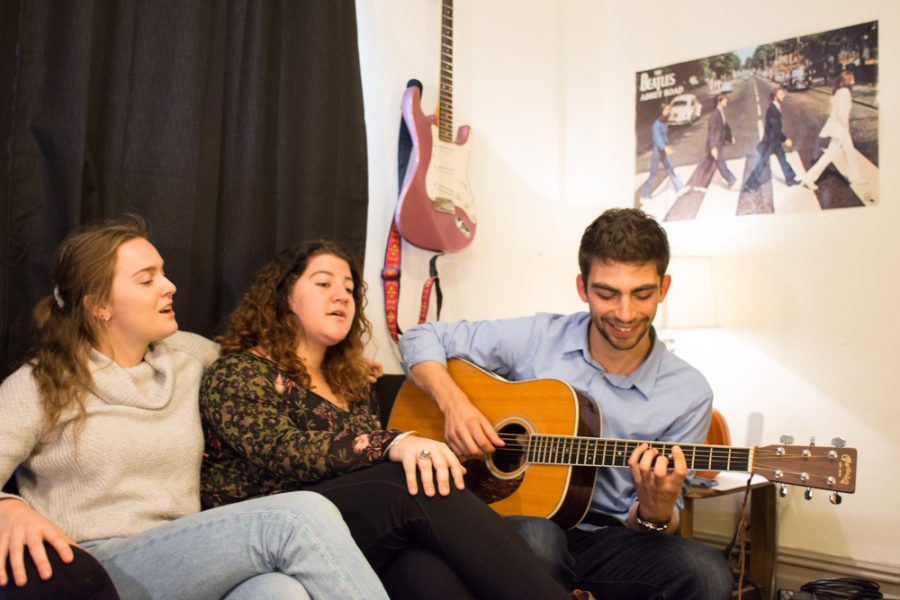 An underground music scene is brewing at Whitman College. Tiny Futon Concerts, a project started by Jake Barokas ’18, is an online platform for student bands and musicians to share their music. What started as a casual jam session between band mates and a joint desire to share their music became a video series, called Tiny Futon Concerts, dedicated to providing student musicians with more outlets for performing.

“There is so much real talent around campus,” Barokas said. “I just want to capture and share that real talent.”

The first official Tiny Futon Concert video was released on September 23, 2017. A few members of student funk band Crossing Isaacs, including Eve Goldman ’18 on voice, Hunter Dunn ’18 on bass, Steven Aslin ‘18 on drums and Barokas on guitar, performed a cover of “Slipping” by Eryn Allen Kane. Despite the fact that Dunn, Goldman and Barokas were in fact sitting on a tiny futon and Aslin was perched on the bed, the beautiful melodies were the focus of the concert.

Barokas spoke of how the project came about.

“One night, we decided to do some recording,” Barokas said. “I wanted to use my own room as a recording space, so we brought instruments into the room and just started recording. Then we were trying to think of a cool name to post the video under and I realized that we were sitting on a tiny futon. So I know Tiny Desk has some social weight to it already through NPR, so we decided to call it Tiny Futon Concerts. So it really started from a desire to make music, not a desire to create a brand or a social media following.”

Eve Goldman ’18 helped Barokas with the social media aspect of Tiny Futon Concerts. In an age where social media is commonly used as a portal to share one’s passion, technology was an important element to include in the project.

“We met and talked about how to brand it and get the word around, so I kind of helped him make an Instagram account and a Facebook,” Goldman said. “Technology is such a big thing, so having [that] to get the word around is important.”

On a campus booming with musical talent, Tiny Futon Concert fills a necessary niche for underground musicians who may or may not be involved in school-affiliated music groups. Chloe Serkission ‘18, who was part of the second Tiny Futon Concert, spoke to this aspect.

“I think there is an underground music scene,” Serkissian said. “Whether that is a cohesive sound, that’s another question, and I don’t think that is the case. But there is a ton of uncovered stuff to be heard.”

The second Tiny Futon Concert was an acoustic performance by the student band Pacific, featuring Serkissian on guitar and voice, and Molly Evered and Goldman also on voice. In their Tiny Futon Concert, the trio performed a cover of “Mexico” by the Staves, “Wind” by Joseph, and an original “Take Me Home” by Serkissian. Pacific’s friendship and experience from years of performing (Evered and Serkissian have been roommates since their first year at Whitman) is reflected through their effortlessly synchronized harmonies.

As a student-run project, Tiny Futon Concerts is able to uncover the hidden musical talents around campus and include a greater diversity of music that viewers don’t see at campus-organized events.

“It is relatively unique in that it is geared towards showcasing Whitman students specifically outside of any kind of organized group,” Serkission said. “Like I was saying before, there are music groups on campus and there are opportunities for students to get involved with arts on-campus, but it’s more structured. Whereas, this is just your talent and Tiny Futon Concerts is just to put it out there. It is through Whitman in a way, but it’s also really not because it’s just students being students and raising each other up in that way.”

Barokas hopes to invite more bands and musicians to perform in Tiny Futon Concerts. He hopes to hold a Tiny Futon Concert Live, where musicians perform on a tiny black futon at a venue on campus. That would bring more publicity to this student-run project that is fueled by students and reveals more and more talent with each video release.