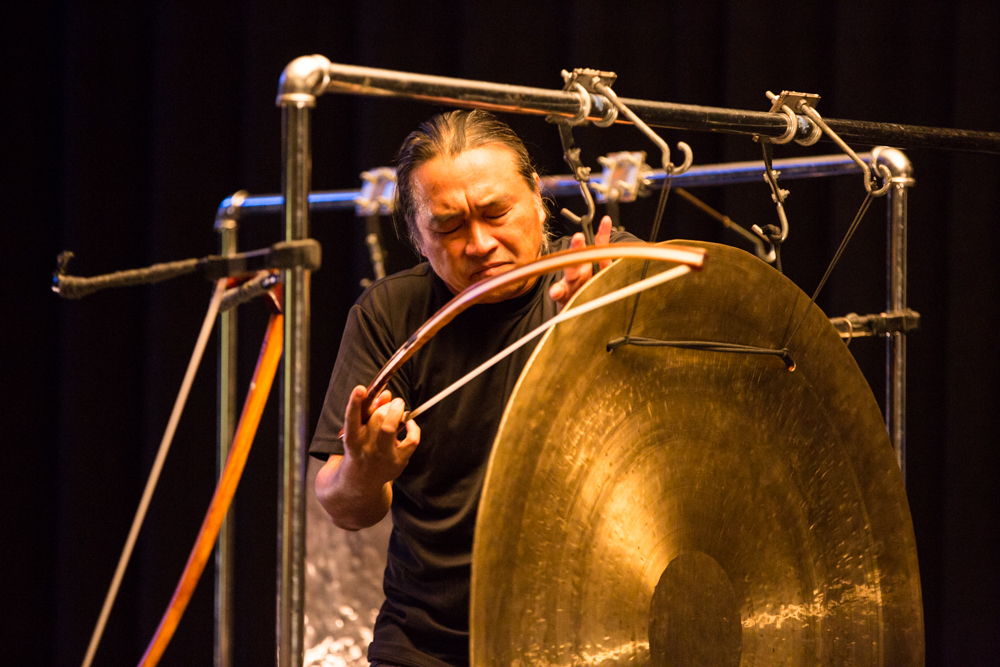 In the crash of cymbals and ringing of singing bowls, a seemingly random series of noise is shaped into a sculpture of sound. Tatsuya Nakatani, master percussionist and sound artist, demonstrated this when he gave a solo performance and short talk at the Whitman Dance Studio on Tuesday, October 3.

The performance provided a taste of “sound art.” Nakatani’s setup included gongs, drums, Japanese Buddhist singing bowls, cymbals, as well as bows and drumsticks. He used all of these instruments to make unique, unexpected sounds that ultimately produced a powerful effect. From his first bowing of the gong, that filled the room with vibration, he demonstrated the intricacies and intensity of producing sound.

The way he did so looked frenzied as he moved from one instrument to another and sometimes combined them—for example, playing the singing bowls on the drums to amplify the sound, and blowing on the cymbals to produce a trumpet-like call. However, even with his almost chaotic movements, Nakatani knew what he was doing.

“When I do solos, I have one rule, which is that I start by gong and finish by gong,” Nakatani said. “But basically it’s open. I don’t need to do all the time the same way. But I have a vocabulary so I’m not experimenting. Experiment and improvising are different.”

Nakatani also emphasized that what he does is not music—it’s art. He described himself as a sculptor of sound. During his talk following the performance, he explained that he used to be a drummer, but in the late 90s lost interest in it. He turned to what he does now, which is creating art from sound rather than traditional music. This results in a very unique collection of sounds.

“You can’t buy this sound from a store,” Nakatani said. “If you want to explore a different way, you have to work for it.”

Nakatani was invited to come to Whitman by Associate Professor of Art Justin Lincoln. Lincoln opened for Nakatani with a performance involving projected images and a pocket operator drum machine, and Senior Adjuct Assistant Professor of Dance Peter de Grasse performed a dance piece in tandem with Lincoln’s sound and visuals. Lincoln expressed the importance of having artists such as Nakatani come to this school.

“I think a lot of Whitman students might not otherwise be exposed to someone like him,” Lincoln said. “I’m excited to bring independent artists in particular. I think it encourages students to do things themselves, and there’s a kind of democratic impulse.”

Lincoln also spoke to the way being at Whitman can help one appreciate this artform.

“One of the best things about being at a liberal arts school is that when you learn multiple ways of seeing things or thinking about things, you can learn to get past your kneejerk responses and impulses,” Lincoln said. “For a lot of people noise is pejorative, it’s a very negative thing, but if you sit with a thing for a while, you may see other dimensions to it.”

In fact, the audience appeared to react positively to the performance, engaging well in the Q&A session. Athen Reid ’19 especially enjoyed the distinctness of the sounds.

“It’s definitely unique, and you don’t see it a lot and you don’t hear it or feel it a lot … the ways in which he controls instruments in unique ways that we never experienced before, and ways that random noises would happen and he just owns it and goes with the flow,” Reid said.

Stephanie Ma ’20 was surprised and struck by the performance.

“I guess I wasn’t expecting that much high frequency sounds,” Ma said. “I was really surprised when he used the bow for the gongs and the cymbal. I didn’t know it could make that ringing noise.”

Ma came out of the performance excited and deeply impressed.

“[I was inspired by] just the depth of the difference from some kind of basic drummer … and then how he seemed just really creative,” Ma said. “I feel like some music is like, ‘oh I’m going to do this just because it’s different,’ but he’s doing it because he really understands tonal differences and the intricacies of music, and this is something that he can really hear and shape … it’s an art rather than just saying, ‘I want to be different and cool just to be different and cool.’”

Whatever the reaction, the art comes as an integral part of Nakatani’s life rather than an expectation for the audience.