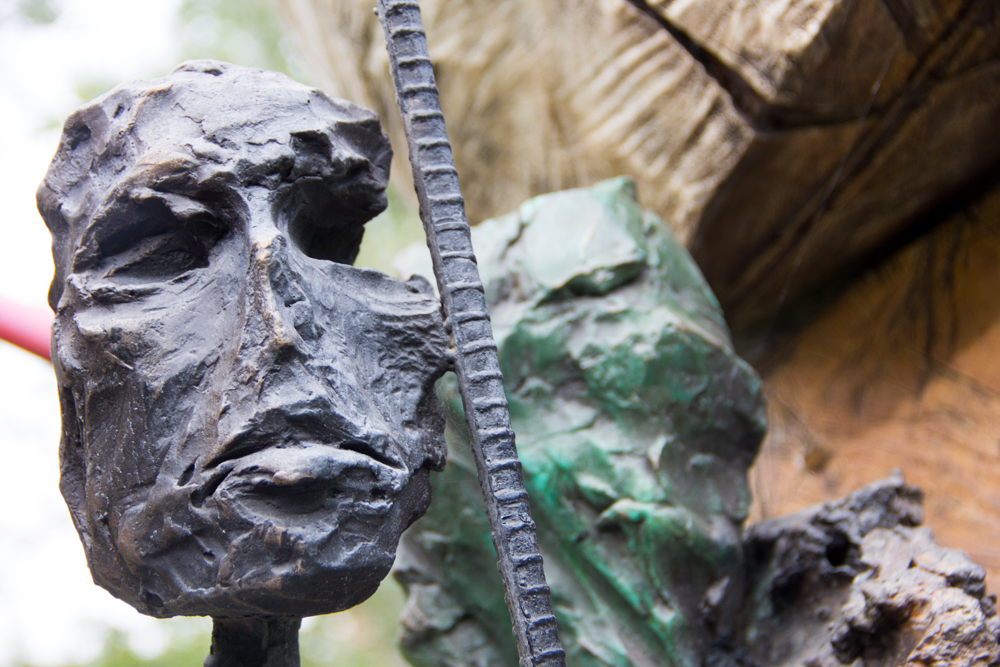 This year, the Fouts Center for Visual Arts is playing host to three striking sculptures by Jim Dine, contributing to the diverse display of art already present throughout campus.

The sculptures were brought to Whitman with the help of Mark Anderson, Whitman graduate and owner of the Walla Walla Foundry. “Wheatfields” and “Column with Ax and Rock” stand together in the courtyard behind Fouts, and “The Abduction” stands in the lobby.

“Wheatfields” is a chaotic and colorful yet balanced piece of art in which viewers can find influence from many of Dine’s other works. Its many components include a large skull sitting atop a piece of farm equipment surrounded by an assortment of other tools and figures. Standing adjacently to “Wheatfields” is “Column with Ax and Rock,” which looks exactly how its title suggests. Meanwhile, “The Abduction” depicts an ape-like figure carrying a woman over its shoulder.

Professor Daniel Forbes, the director of the Sheehan Gallery, feels that these sculptures fill a physical and social space that has been waiting to be occupied.

“When the Fouts Center for the Visual Arts was constructed, that back area was designed with the idea that it would become a place that would contain displays of artwork,” Forbes said. “Everything that goes on campus comes to us in a variety of ways and fits in its own way, but I do think it’s incredibly exciting to have such significant work fill that space, even if it is temporary.”

Forbes feels that the sculptures will cultivate new discussions and study subjects for students and classes similar to how “Carnival,” another Jim Dine sculpture on campus, has been incorporated into the Encounters curriculum.

“I think for the students in the studio classes or even the students looking across the creek from Reid, having this kind of work on campus stimulates a lot of different talking points,” Forbes said. “It’s great to have these other works by Jim Dine to serve as additional alternative texts to ‘Carnival.’”

“I must’ve passed by ‘Carnival’ twenty times, but I didn’t really look at it until we started discussing it in Encounters,” Collier said. “Now I can’t walk by these new sculptures without stopping to look for something that I hadn’t noticed before. It’s so cool to have more of Dine’s work on campus.”

Zoe Guckenheimer, a senior art major, feels the sculptures have added a positive energy to her environment.

“As an art major, it’s really nice to have these big pieces in this kind of dome of the building where we can look out and be inspired by higher up people who are getting shown in magazines and being recognized in major museums,” Guckenheimer said.

The sculptures, although not at all Dine’s newest works, provide a refreshing addition to the campus aesthetic. Forbes stressed how lucky we are to have his work so actively present in our daily commutes to class.

“You have to realize how significant these pieces are,” Forbes said. “Jim Dine is an internationally known and iconic pop artist and we’re really, really fortunate here on campus that we have a lot of artwork visible and on display. You don’t get that at a lot of institutions.”

A reception will be hosted by Sheehan Gallery to celebrate the sculptures as well as feature some more works by Jim Dine. The event will take place on the FCVA lawn on Saturday, Oct. 14 beginning at 3:30 p.m.